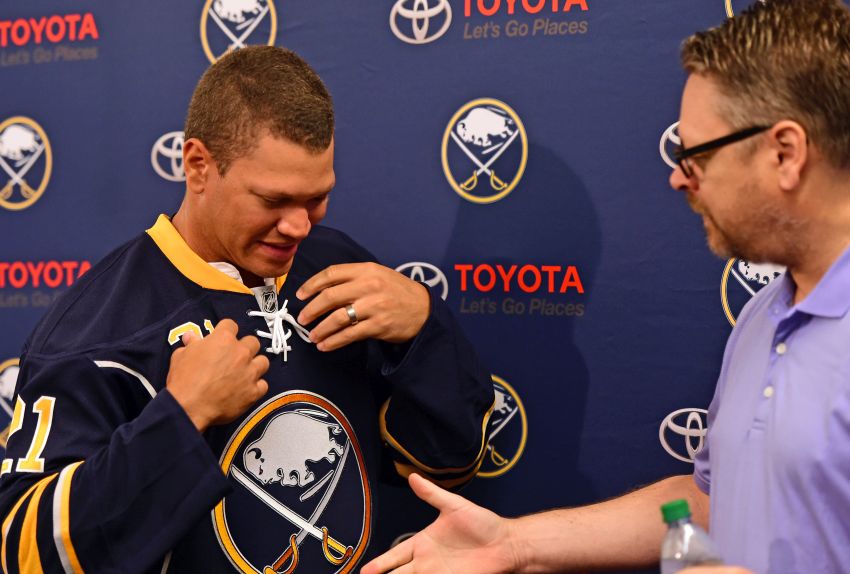 BUFFALO – Shortly after winger Kyle Okposo put on his new No. 21 Sabres jersey and spoke to the media Thursday morning, some of the team’s higher-ups reportedly boarded a charter flight from Prior Aviation bound for Boston.

What was the purpose of their trip? Likely a meeting with winger Jimmy Vesey, 23, the former Harvard University star whose negotiating rights the Sabres acquired June 20.

Vesey seems dead set on becoming an unrestricted free agent Aug. 15. Still, only the Sabres, who traded a third-round pick to the Nashville Predators, can talk to the Hobey Baker Award winner right now.

So they have five weeks to convince Vesey the team offers him a chance to begin his NHL career beside some prime young talent and the opportunity to contend for the Stanley Cup someday.

Getting Okposo to sign a seven-year, $42 million contract early in free agency last Friday wasn’t a hard sell. The Minnesota native bought into the Sabres’ vision and wanted the chance to play beside centers Jack Eichel or Ryan O’Reilly.

Okposo, arguably the best talent available in a weak class, likely wasn’t on the Vesey “recruiting” trip. But his actions and words hold some weight. He just chose Buffalo over other suitors.

So what would Okposo tell Vesey?

“I would tell him we’re going to be a good team for a long time,” a smiling Okposo said inside the First Niagara Center. “It’s going to be a fun organization to play in. We have the Pegulas at the helm. … We’re going to be contenders, and that’s something that isn’t always there on teams. I know that personally. We went through a really tough stretch (with the New York Islanders).

The presence of Eichel and O’Reilly helped convinced Okposo, who left a 100-point team fresh off a playoff upset, to join the Sabres, a team five years removed from its last postseason appearance.

Okposo, 28, understands what a special talent Eichel, 19, could become. Okposo was beginning his third pro season when the Isles welcomed No. 1 overall pick John Tavares.

Over the years, Okposo witnessed Tavares’ rapid development from a raw prospect into one of the NHL’s premier centers, often as his linemate.

Now, seven years later, Okposo has another rare opportunity to watch – and even help – Eichel, the No. 2 pick in 2015, become one of the league’s premier young talents. Okposo and Eichel have already texted each other.

“I see a lot of similarities in the height and the skillset, some of the things that he does out there from when Johnny was 18,” Okposo said. “I know where Johnny’s career path went, and I know how he worked and how hard it was for him to get there.

“(I’m) just looking forward to maybe saying a couple things to Jack or sharing some of those experiences with him and just trying to help him grow.”

Okposo, of course, will almost certainly play right wing beside Eichel or O’Reilly. Either way, he can’t lose.

“I’ve been saying it for a week, that Ryan is one of the smartest players, one of the smartest centers in the league, in my opinion,” Okposo said. “Jack’s got nowhere to go but up. His ceiling’s so high. He’s going to be a tremendous player in this league for a long time.”

Okposo is in town learning about his new organization and the city. He said his friend, former Sabre Drew Stafford, joked about Okposo wearing his old No. 21 number.

“I told him I’d take it down from the rafters for him,” Okposo cracked.

Clearly, Okposo is excited to be in Buffalo. He said he briefly stood on the home bench and daydreamed a little as he surveyed the rink.

His massive contract, he said, won’t change the way he plays.

“I think that’s where you kind of get in trouble, when those expectations beat you down and weigh you down,” Okposo said. “I’m going to go out there and play the way I know how and prepare the same and make sure that my game is there. I’m at a point in my career where I know what I have to do to be successful, and I’m going to continue to do that.”