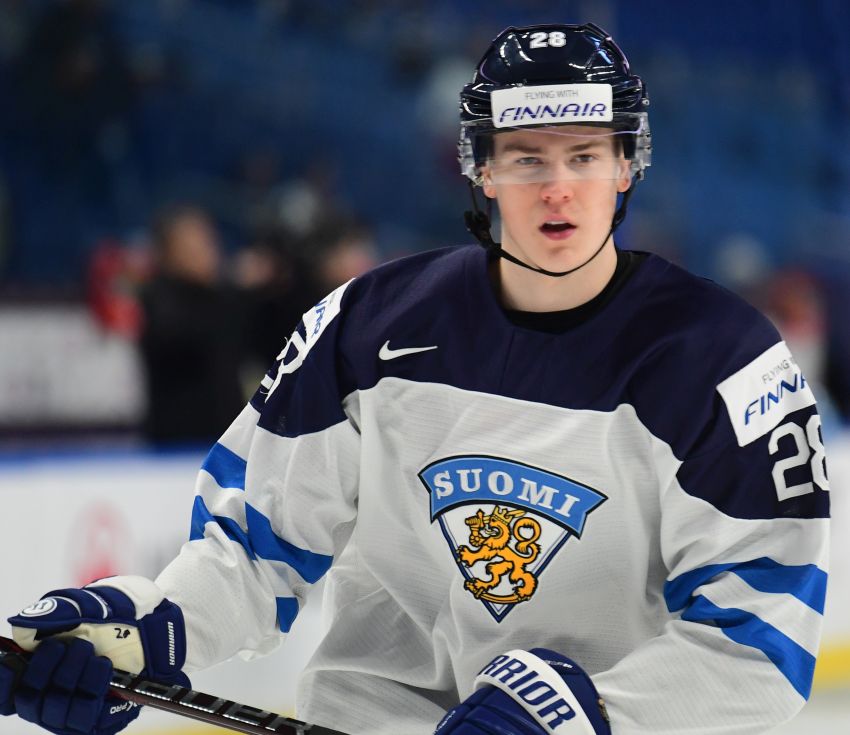 BUFFALO – Sabres general manager Jason Botterill knew of Henri Jokiharju’s talents before he watched the defenseman up close during Team Finland’s run to a gold medal at the World Championship in the spring.

So even if Botterill hadn’t run Team Canada’s entry in Slovakia, the Sabres still might’ve dished winger Alexander Nylander to the Chicago Blackhawks in exchange for Jokiharju on July 9.

“It certainly helps things out to see a player play on that big a stage and not wilt under it, but actually thrive and have success,” Botterill said during Saturday’s Sabres Fan Fest inside KeyBank Center, an event that celebrated the team’s 50th anniversary season. “What made us just comfortable making the move is we had a track record from our scouts watching him very closely over the last couple years.”

Botterill said the defensemen the Sabres have acquired this year – they also traded for Colin Miller in June and Brandon Montour in February – fit “a common theme.”

“Being able to skate, being able to make that good first pass,” Botterill said. “With Henri, that’s what we see from him. I’ve always liked his speed, liked his ability to get out of his own zone.”

The Sabres also coveted Jokiharju, who turned 20 on June 17, because he comes from a winning background. In addition to playing 30 NHL games as a teenager last season, he won another gold medal with Finland at the World Junior Championship.

“(He) played games in the National Hockey League, played a full year pro, won a gold medal at World Juniors, won a gold medal at World Championships, which I was a little disappointed about,” Botterill joked. “But to have that winning mindset, you’ve seen it with the players we’ve acquired – (winger) Marcus Johansson, Colin Miller. (They’re) players that have playoff experience.”

When new Sabres coach Ralph Krueger set out to assemble his staff, he didn’t want hire people close to him.

“I truly am not the type of person that hires friends,” he said. “I hire people that will challenge me and help me to grow and bring something different to the table.”

Krueger and Smith, who won three Stanley Cups as a player, began their NHL coaching careers together as assistants with the Edmonton Oilers. When the Oilers promoted Krueger to head coach in 2012, Smith served as his top assistant.

“That experience is extremely valuable, because he’s now worked in other environments and has grown and developed in a very strong way,” Krueger said. “It’s good for me. I needed to bring somebody that has experience over the last year. I needed to bring that with me. Smitty really harmonized with the D.”

Krueger had never worked with Don Granato and Mike Bales, the assistants he hired in June.

“Don Granato is one of those lifer coaches I was looking for,” Krueger said.

Granato, who will be on the bench with Krueger and Smith, has varied experience that includes stints in the NHL, AHL, NCAA and junior, where he coached the U.S. National Team.

“It worked out perfectly that he was hungry and is more than a goaltender coach,” Krueger said. “He’s really, for me, like an assistant already. That’s why we’ve started quite small.”

Smith spent the last eight seasons with the Rochester Americans.

Not surprisingly, Sabres legends Gilbert Perreault and Rene Robert like the team’s decision to switch back to royal blue, Buffalo’s original color, for the 2020-21 season.

The Sabres have sported navy blue since 2006.

“I like it, go back to the old roots,” Robert said. “I mean, this is the way it should be. … The original jersey will always be the Sabres jersey.”

Perreault said when the Sabres changed their logo in 1996, “it killed the alumni.”

“You got to keep the same crest, the same color,” he said. “That’s very important to me.”