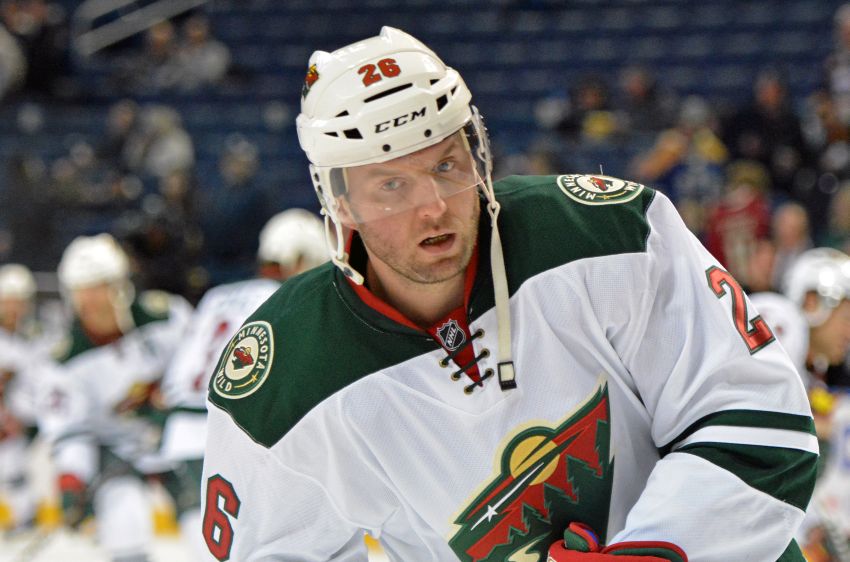 Of course, Thomas Vanek couldn’t say anything as he bounced from team to team last season. But the former Sabres star confirmed the suspicions when free agency opened July 1, signing a three-year, $19.5 million contract with the Minnesota Wild.

“Honestly, every time I went out somewhere and got recognized, that was one of the first things that people would ask me, ‘When is Van coming? Is he coming?’” said former Sabres captain Jason Pominville, Vanek’s Wild teammate. “So he’s finally there and everyone was excited and he’s excited. But the goals haven’t come.”

Vanek’s first-period power-play goal in the Wild’s 7-0 win against the Sabres on Thursday, just his eighth score in 43 games this season, helped end an eight-game losing streak.

The 30-year-old’s meager production has contributed to the Wild’s wretched season.

“I really haven’t found the combination that works,” Vanek said Wednesday inside the First Niagara Center. “I think we’ve been juggling a lot of the lines and stuff. At the end of the day, I got to be better. That’s the one thing I’ve always prided myself on, and I don’t shy away from that, especially in times like this. It doesn’t matter who you play with. Shoot the puck more and start getting some production.”

Vanek has averaged 32 goals in his eight full NHL seasons and scored 20 times in 38 games during the lockout-shortened 2012-13 campaign.

The Austrian winger scored his first goal in the 10th game this season and his second in the 22nd contest. A pass first-mentality hasn’t helped. Vanek began Thursday with only 80 shots. He even dished on breakaway last week.

At his current pace, Vanek would score a career-low 15 goals.

“I’m not even worried about that,” Pominville said about the low production. “He’s going to find a way to put some in the net.”

Coincidentally, Vanek has scored three goals against the Dallas Stars, who are led by former Sabres coach Lindy Ruff.

“He finds a way to get back at Lindy somehow,” Pominville joked.

Despite the marathon slump, Vanek, one of the NHL’s streakiest scorers, insists he’s starting to settle in and feel more comfortable after playing for three teams – the Sabres, New York Islanders and Montreal Canadiens – in 2013-14.

“I feel like my game is coming along,” Vanek said. “I feel like I’m making good plays and setting guys up. With seven goals, I can’t be too happy with that. I know I got a lot more in me.”

Even in good times, Vanek’s rarely happy with his game. He’s notoriously hard on himself. He often raises his head in frustration after missing a scoring chance or sounds disgusted with his play following the game.

“It’s not about pointing to others,” Vanek said. “Going good or bad, I think we always have more to give. … I think the one thing I’ve been taught … when things aren’t going well, don’t think about too much what happened yesterday – worry about today, worry about tomorrow.”

Right away, Wild coach Mike Yeo noticed Vanek “put an awful lot of pressure on himself.”

“I would say since Christmas I’ve liked where his game’s at,” Yeo said. “It’s hard to sit here and be happy with anything right now, but I will say that you can clearly see he is trying to help us win and he cares about winning. He’s been more vocal on the bench. He’s feeling more comfortable around the guys. Certainly, he’s talking it personally.”

The Sabres ignored Pominville’s return to Buffalo early last season, earning a heap of bad press. They finally honored him with a video tribute Thursday. The fans gave the 32-year-old a loud ovation.

Pominville, who had three assists, was one of the Sabres’ most popular players during his eight years here.

It’s tempting. Just having captain Brian Gionta back for practices has had a positive effect on the reeling Sabres. Coach Ted Nolan wants to play the veteran winger badly.

Nolan also wants to be careful and exercise some patience. So Gionta, out the last 11 games with an upper-body injury, will likely be sidelined until after the NHL All-Star break.

“We have to make sure you maintain that patience, make sure you’re doing the right thing for him for the long term,” Nolan said Thursday morning. “I’d play him tonight, to tell you the truth. But we’ll be a little more patient. If there’s that little question mark, we’ll wait until after the All-Star break.”

Winger Chris Stewart returned Thursday after the flu sidelined him one game. Forward Zac Dalpe was returned to Rochester.