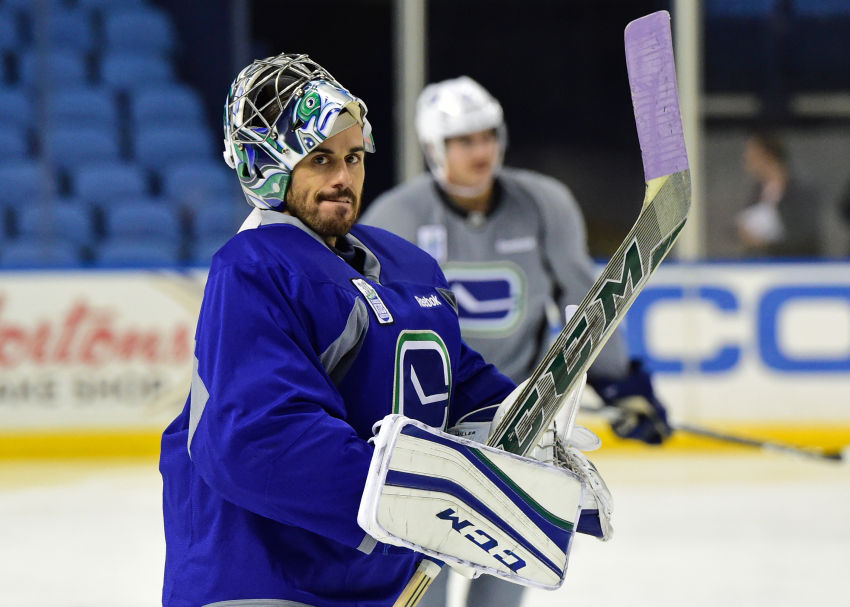 Ryan Miller is happy to be back in Buffalo. ©2015, Dan Hickling, Olean Times Herald

BUFFALO – So far, Ryan Miller’s first visit here since the Sabres traded him Feb. 28, 2014 has been “a little surreal” and “a little bit emotional,” the goalie said this afternoon.

Of course, Miller, the Sabres’ franchise cornerstone for almost 10 seasons, is excited to be back. He’ll play his first game as opponent here Saturday afternoon with the Vancouver Canucks.

As usual, Miller, who talked to the media after the Canucks practiced this afternoon inside the First Niagara Center, was thoughtful. Some quick quotes are below. Look for a full story later.

“I don’t know, I’m still trying to wrap around that. I just kind of wanted to get through practice today and see how that went. But it was fun being in the building again. A little different change stall, a little different room. It was fun to be back on that ice, for sure. We’ll see how it goes tomorrow. I’m going to compete, that’s what I want to do, but as far as how the game is going to go and emotions or whatever, just take it as it comes.”

On the changes downtown and around Buffalo:

“It’s fun to see how things have changed. Maybe staying away is little bit of a shock to the system to come down here and see so much has changed. I’m really excited for the city in that regard. There’s some really nice things happening. People seem to be responding really well to that. I’m hearing lots of good things. It’s nice to come back here and know everything’s going well.”

On people greeting him in Buffalo:

“It was nice. I spent a long time here and tried to connect as best as I could with the community. I felt like I was a part of it. That’s a great thing about Buffalo. A lot of guys have been asking me about what Buffalo’s all about. The simplest answer is you get to know the city, you get to know the people. That’s really where it’s at. That’s what always made it a great place is once you kind of show people who you are and they accept you, I think you’re always kind of a part of that.”

His message for the fans:

“I just miss everybody. Things are good and I hope everything is good with them. I hope everybody is enjoying everything in Buffalo. It’s exciting times; a lot of good things going on here and just to enjoy it.”