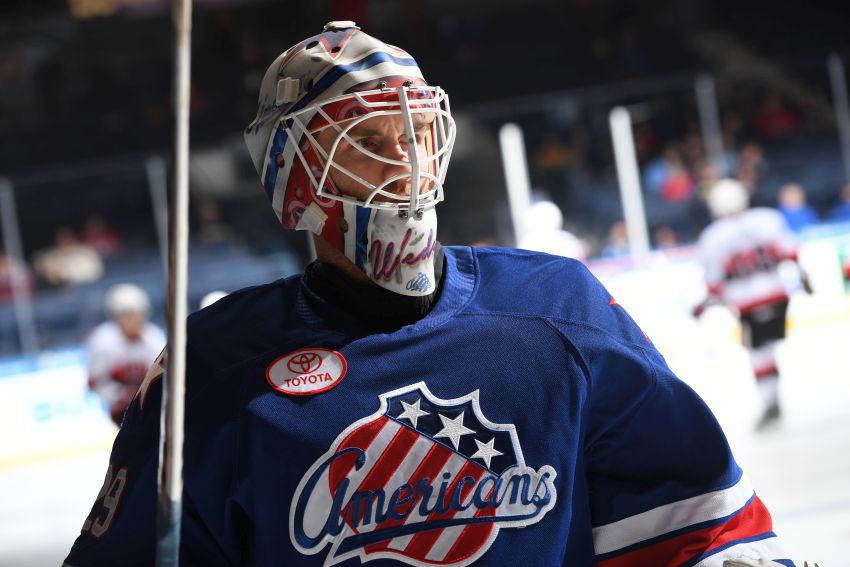 But for much of the 2018-19 campaign, Wedgewood was the Amerks’ backbone, tending some of the league’s best goal.

After Christmas, Wedgewood won 16 of his first 21 appearances. Overall, he enjoyed a career season, compiling 28 victories and five shutouts in 48 games.

Still, it was evident Wedgewood, 26, would be moving on. The seven-year veteran never had much of a future with the Buffalo Sabres.

He will likely start the year as the No. 1 netminder for the Amerks’ archrival, the Syracuse Crunch.

Wedgewood, who has played 24 NHL games, only showed up in Buffalo last season to dress as a backup.

Carter Hutton and Linus Ullmark stayed entrenched as the NHL goalies. Even as they began struggling in the winter, the Sabres stuck with the duo.

The Sabres also have top goalie prospect Ukko-Pekka Luukkonen ready to start his pro career in Rochester this season.

Here are where some other former Amerks signed this month:

O’Regan, one of the Amerks’ top forwards, compiled 20 goals and 48 points in 70 games last season.

Curiously, the Sabres, whose forward depth has been weak for years, never rewarded the Boston University product with a long look.

O’Regan played only two NHL games after arriving from the San Jose Sharks in 2017-18 and just one last season.

Since O’Regan is 25 and has fewer than 80 games of NHL experience (25 over three pro seasons), he was a free agent this summer instead of a restricted free agent.

Tennyson, 29, played 19 games with the Sabres over the last two seasons. Former coach Phil Housley’s reliance on Tennyson early in 2017-18 drew the ire of fans.

Tennyson spent most of his time in Rochester, compiling seven goals and 32 points in 97 games.

– Winger Wayne Simpson signed a one-year contract with ERC Ingolstadt, a team in the German DEL.

Criscuolo, 27, grew up in Southampton Township, about 18 miles outside Philadelphia.

The Harvard product played his first nine NHL games with the Sabres in 2017-18.

Powell enjoyed a monster rookie season with the Cincinnati Cyclones in 2018-19, scoring 31 goals and 66 points in 57 outings with Buffalo’s ECHL affiliate.

The R.I.T. product went pointless in seven outings with Rochester.

He registered two assists in three games with the Amerks.

One thought on “Former Sabres, Amerks have landed new contracts all over”