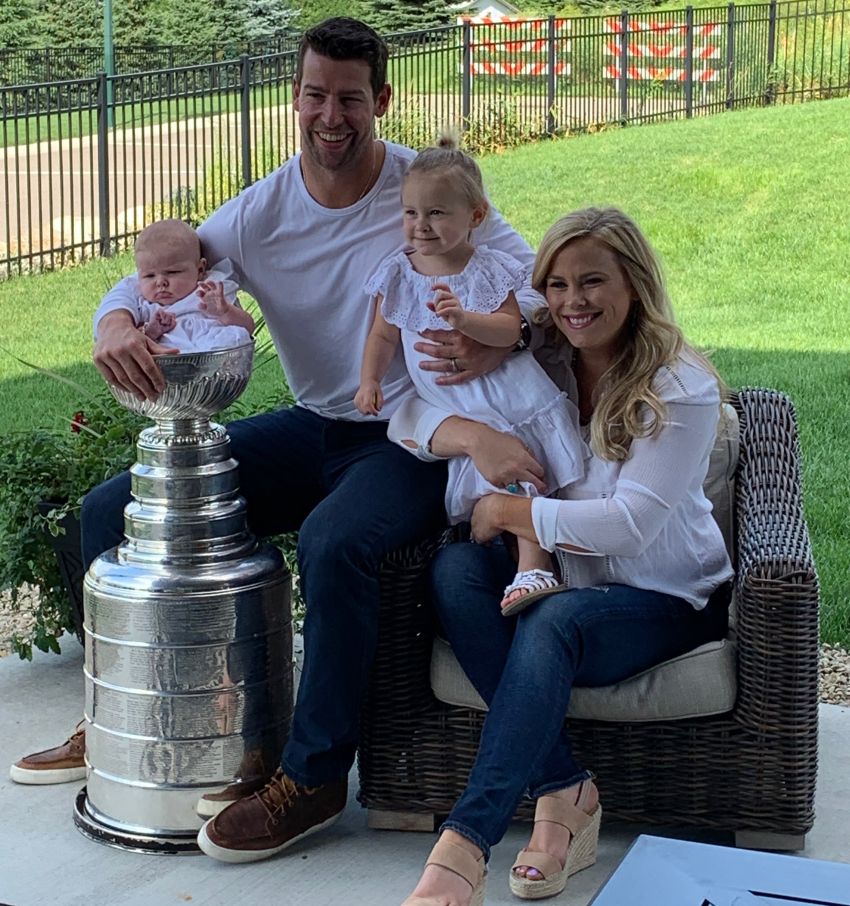 Chris Butler, his wife, Jordan, and their daughters, Avery (left) and Sloane, enjoyed a day with the Stanley Cup on July 22. ©2019, Chris Butler

It finally hit Chris Butler after the Stanley Cup arrived at his door last week in Eden Prairie, Minnesota.

Even as Butler lifted hockey’s most coveted prize over his head on the TD Garden ice and kissed it June 12, it didn’t fully sink in he and his hometown St. Louis Blues had captured their first Cup.

“There’s such a wave of emotion going on at the time, almost disbelief of what just transpired,” said Butler, who played his first three seasons with the Buffalo Sabres. “It’s something that you never really thought of as a kid is now happening.”

So when the defenseman spent July 22 celebrating with the Cup at his house, he finally comprehended what had been accomplished.

“We were actually sober and could enjoy it and talk about it and share some stories and celebrate with family and friends,” Butler said.

Butler and his crew enjoyed dinner with the Cup. His 2-year-old daughter, Sloane, put her Mickey and Minnie Mouse dolls in it. His daughter, Avery, who was born in early May, sat in the trophy. He also brought it to a local golf course, where some children drank chocolate milk from it.

“It was an unbelievable night,” said Butler, who played 13 regular-season games with the Blues before serving as an extra defenseman during the playoffs.

The Game 7 victory over the Boston Bruins and one of the most improbable Cup runs ever – remember, the Blues ranked dead last in January – provided an unbelievable ending to Butler’s 11-year career.

The Blues offered him another contract, but he turned them down. He wanted to walk away from the game healthy.

Butler said he has heard “horror stories” about the “poor quality of life” some former players who suffered concussions endure.

“I just didn’t want to be that person,” he said.

So Butler and his wife, Jordan, a veterinarian in Minnesota, decided last winter he would retire following the season.

Butler said the concussion he suffered late in the campaign with the San Antonio Rampage, his second head injury in two years, “was kind of the icing on the cake.”

“I wanted to be able to enjoy my kids and my family,” he said. “I’ve got a lot of interests both in hockey and outside of hockey, and I want to be able to pursue those and enjoy my … post playing career.”

He added: “I didn’t want to be someone who was crippled by injury or struggling with memory loss, or you can name so many other issues that people have with concussions.”

Butler, who shuttled between the Blues and their AHL affiliates for five years, finished the regular season in San Antonio before the Blues recalled him for the postseason.

He spent his final days as an NHL player as a “Black Ace,” watching all 26 playoff games as a spare with two other former Sabres – Jordan Nolan and Chris Thorburn.

As the final minutes of Game 7 approached, Butler and the other extras changed into their uniforms to join their teammates for the on-ice celebration.

Ironically, the only seven NHL postseason contests Butler ever played came in 2011, the last time the Sabres made the playoffs.

Ten years ago, Butler was one of the Sabres’ top prospects. He spent less than half a season in the minors before he earned a spot in Buffalo.

Even as a youngster just a year or two removed from the University of Denver, Butler acted and sounded like a veteran.

He had finally established himself as a regular in 2011 when the Sabres traded him to the Calgary Flames in the Robyn Regehr deal.

“As you get older you realize how special some of the teammates were that you had,” Butler said.

He added: “We just had awesome people come through that organization. We had really competitive teams and the fan base. … That’s what I appreciated most about living there, was just the passion of the people.”

Following three seasons in Calgary, Butler settled into the second phase of his career. As a depth defender and veteran mentor, he played 244 AHL games and 58 NHL contests over his final five years.

“Guys would joke around and say I was kind of like a Reg Dunlop,” Butler said of the graying player-coach Paul Newman played in the 1977 cult hockey movie “Slap Shot.”

Those final seasons likely helped Butler prepare for the next stage of his life. He would like to stay in hockey. He is also interested in real estate, which he studied in college.

Butler said he has already had some hockey interviews.

“I love mentoring kind of the next generation of guys,” he said. “I think ideally player development would be something I’d love to get into and ultimately maybe get into a management role someday. I’d love to try to piece together a team and take an organization from the bottom to the top.”