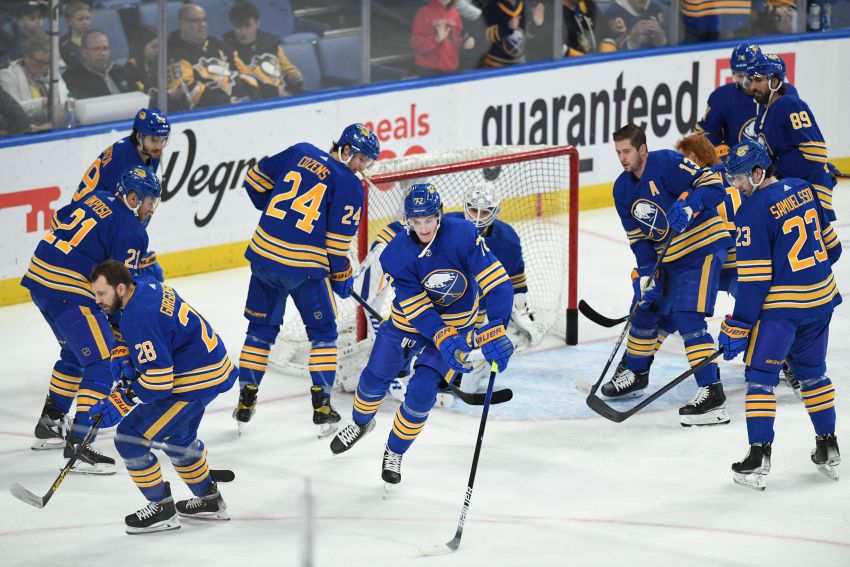 The Sabres became a tight group this season. ©2022, Micheline Veluvolu

BUFFALO – Before center Zemgus Girgensons reported to the rink Saturday morning, his wife, Katie, asked him what he would tell the Sabres’ brass during his end-of-season meetings.

Girgensons, the Sabres’ longest-tenured player, experienced a lot of losing and turmoil over his eight NHL seasons, so in previous years, he had plenty of gripes to share before he left town for the summer.

“Usually in the morning, you’re trying to gather thoughts of all the complaints, the issues that are going on,” Girgensons said inside KeyBank Center.

But having just completed a stable season in which the Sabres showcased growth and grew close together, he told his wife he did not have many complaints.

“It’s weird, like usually there is a lot, you have like a full list,” Girgensons said. “But, no, it was great to see the growth of the guys there, especially at the end.”

Some locker clean-out days during the Sabres’ decade of futility quickly became part of franchise lore.

Last year, ex-captain Jack Eichel first spoke of the “disconnect” he felt with the team over his inability to have the neck surgery he wanted. In 2018, ex-center Ryan O’Reilly talked about losing his passion for the game at times. In 2017, a seething Eichel gave terse answers as he fielded questions about the Sabres’ disappointing season.

On Saturday, however, every player who spoke sounded happy and optimistic. The Sabres, fresh off a terrific 16-9-3 finish, feel like they’ve laid the groundwork for future success.

The rebuilding Sabres, of course, weren’t expected to do much this season. The roster was mostly comprised of unproven young talent, underachieving veterans and cheap journeymen free agents.

Coming off a dreadful 2020-21 campaign, many prognosticators picked them to finish dead last again.

Instead, the Sabres compiled a 32-39-11 mark in their first full campaign under coach Don Granato, earning 75 points and ending the season fifth in the Atlantic Division and 24th overall.

“Looking back to what we started the first day of training camp, I think everybody can be proud of where we are,” Okposo said. “And I think if you look at expectations from the outside, I think we probably exceeded what they were. And internally, we really didn’t set any expectations as far as like wins or losses. It was just, ‘We’re going to win the day.’”

Goalie Craig Anderson traces the fun and enjoyment the Sabres had this season to the expectations general manager Kevyn Adams laid out.

“The expectations right from the get-go from Kevyn was we’re building a culture the right way, we’re going to do things the right away,” Anderson said. “We’re going to get to the end point, which is eventually playoffs, get there. We understand if that doesn’t happen this year, it’s OK, but are we going in the right direction?”

“You go into a game and there’s no doubt,” Okposo said. “And if you don’t, you’re going to win the next one.”

Okposo, who was named an alternate captain with Girgensons this season, said he talked to the team about that feeling during an early closed-door meeting.

Later in the season, when the Sabres visited New Jersey, Okposo said a young player was sitting next to him, looked at him and said, “Man, it feels good because we’re going to win this game.”

“And it was the first time that I felt that in six years,” said Okposo, who joined the Sabres as a free agent in 2016. “And that was something that was pretty special. So I think it’s coming and I’m looking forward to what’s in store for our group.”

Okposo understands two strong months won’t automatically carry over into next season. But the way the Sabres approached their games down the stretch encourages him.

“How we prepared for games was exactly like you do when you’re in the race,” Okposo said. “Like there was no, ‘Oh, we’re going to be good because we’re playing loose.’ That’s not how we played. And that’s what translates. When you play loose and you just are like, ‘Okay, there’s no pressure. We’re just going to win some games because we’re going to outskill teams.’ I think that’s what doesn’t translate.

“But when you watch us play, like that’s not what we did. We grinded. We played the right way. It was frustrating. If something didn’t happen, it wasn’t just like, ‘Oh, yeah, whatever. We just lost another meaningless game.’ We all took it personally. And that’s what you do when you’re a good team.”

Dahlin said over the final two months, the Sabres, who defeated a slew of playoff-bound opponents, “really started to compete every game.”

One thought on “Upstart Sabres believe they’ve started something special: ‘A different feeling’”