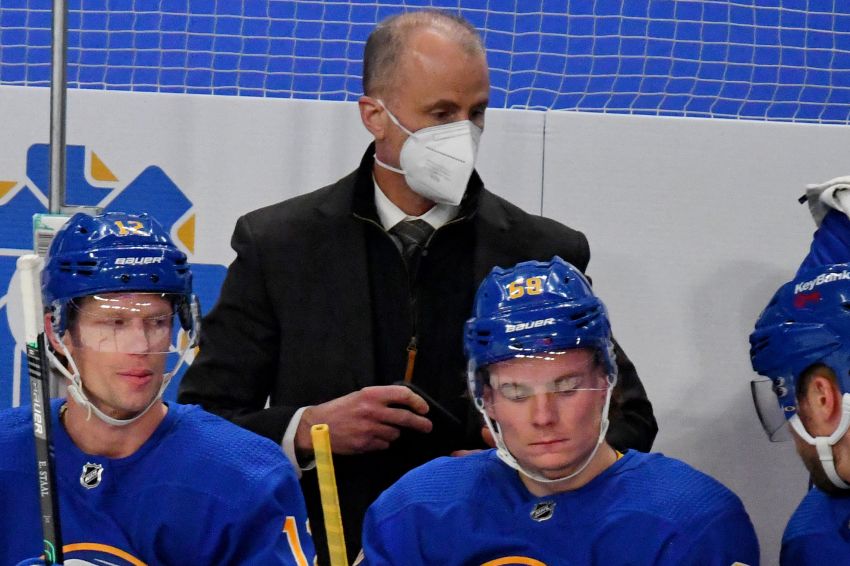 Ninety minutes before his NHL head coaching debut, Kevyn Adams was more focused on stepping behind the bench than trying to process the chaos that has transpired in his first season as Buffalo Sabres general manager.

“I can’t even really get into all that,” Adams said on a Zoom call prior to the Sabres’ 16th consecutive loss, a 4-0 setback to the Pittsburgh Penguins.

Can you blame Adams? The season from hell refuses to let up.

Hours before Thursday’s game, interim coach Don Granato and assistant Matt Ellis entered the NHL’s COVID-19 protocol and couldn’t coach against the Penguins. So Adams had to fill in.

Granato, 53, and Ellis, 39, are self-isolating, according to the team. Adams said they’re asymptomatic. Entering COVID-19 protocol doesn’t mean the person has tested positive.

“Both of them feel great,” said Adams, whose team endured a long COVID-19 pause last month.

The coaches, of course, were in close contact with the players, so why was the game played? Adams couldn’t reveal other details.

“What’s key here is that they’re in protocols,” Adams said. “This just happened to me within the last couple of hours so I don’t have really any information.”

The Sabres quickly summoned Rochester Americans coach Seth Appert, who subbed for assistant coach Dan Girardi once last week, to Pittsburgh to fill in as another assistant. Appert arrived at PPG Paints Arena late and was behind the bench when the second period started.

Granato was hospitalized with severe pneumonia early last season and missed nearly two months. When the Sabres’ pause ended last month, he briefly fulfilled his coaching duties from a suite during games.

Adams wouldn’t comment on his level of concern for Granato and Ellis.

“I’m not a doctor,” Adams said. “They’re in COVID protocol. There’s strict provisions around this with the NHL and how things run, and that’s all I’ll say. But they’re both doing great, they both feel good and we’ll hopefully have more information shortly on where we go from here.”

“I’m comfortable,” he said of stepping behind the bench. “Obviously, I’ve been watching every game, and with the team all season. I know the team really well, the personnel, I know the tendencies. Obviously, (I’ve) been behind a bench before. I think the players also know in these situations this is an opportunity for them to take on adversity in their own way and be better for it, right?

“So that was part of the message, too. ‘Hey, we’re all in this together. Let’s go and do the best we can. And expectations don’t change. Time to go to work.’”

This season has been an abject disaster for the hapless Sabres, the NHL’s laughingstock.

They rank dead last in the league. They haven’t won a game since Feb. 23. They own the NHL’s longest losing streak of the shootout era, which comprises the last 16 seasons. Adams fired coach Ralph Krueger on March 17.

The list goes on. The Sabres have endured perhaps the roughest season in their 51-year history. There are still six weeks left.

Adams said the Sabres have restructured their scouting department.

Adams said Forton will be hiring scouts. Right now, the Sabres have seven scouts listed on their staff directory.

“That was part of internal meetings that I’ve had recently with ownership and ultimately the whole hockey department over the last couple days,” Adams said of the restructuring.

Adams said he is “actively interviewing candidates for the assistant GM role.”

“The goal has been to kind of take it all in and understand where we go from here and where we need certain areas to be added to our hockey department,” said Adams, who was hired nine months ago.

The Sabres don’t have an assistant GM.

Sabres forwards Steven Fogarty and C.J. Smith, who were recalled from the taxi squad Thursday afternoon, both played against the Penguins.

Meanwhile, winger Tage Thompson and forward Rasmus Asplund both missed the game. Adams said Thompson is sick but he isn’t in COVID-19 protocols. Asplund has been placed on injured reserve with an upper-body injury.

The Sabres also recalled forwards J-S Dea and Brett Murray from the Amerks to the taxi squad prior to the game.

Adams said the Sabres will have an update today on goalie Carter Hutton, who left Monday’s 5-3 loss to the New York Rangers after suffering a lower-body injury.

“We’re hopeful on it but we’ll be able to tell you a little bit more tomorrow,” he said.