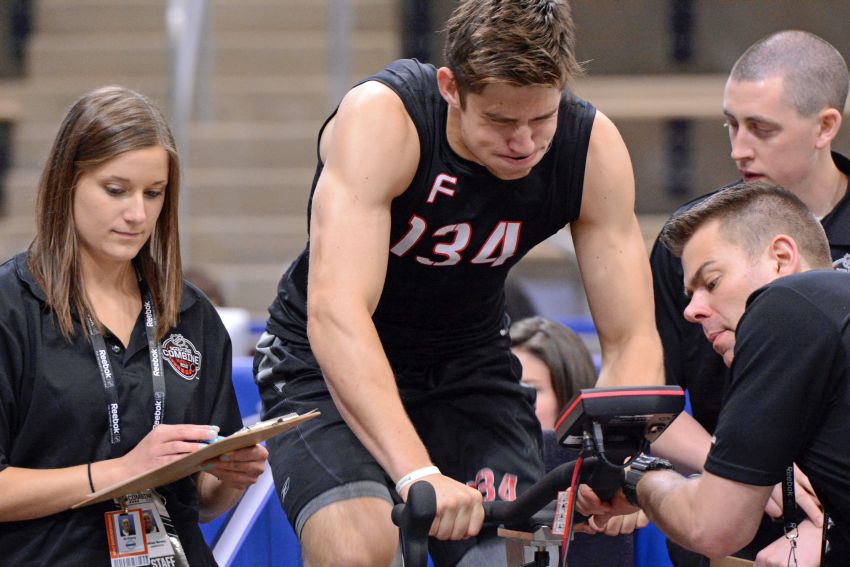 BUFFALO – Like everyone in the Boston University program, NHL Draft prospect A.J. Greer would benefit greatly from another season with Jack Eichel, the phenom the Sabres will draft second overall June 26.

Eichel’s incredible talents ignited the Terriers, transforming them from an also-ran into a powerhouse that fell a goal short of the national title in April.

But Greer wants Eichel to leave school. Greer believes Eichel’s too good for the college game and the Hobey Baker winner should turn pro.

“I think he’s ready,” Greer said Saturday inside HarborCenter following testing at the NHL Scouting Combine. “He’s a pro. In his mind, he’s a pro.”

Eichel hasn’t said if he’ll leave college after his freshman season. He said Friday the decision will be made following the draft.

If Greer had his way, Eichel wouldn’t end up in Buffalo. He “strongly” believes Eichel should be drafted No. 1 by the Edmonton Oilers instead of Connor McDavid.

“Nothing against Connor, but I think in five years he’ll definitely be something special,” Greer said about Eichel.

Eichel’s greatness awed Greer, who said his friend “acted like a pro everywhere.” On the ice, in the gym or in the classroom, “he always wanted to be better.” Those actions rubbed off on his teammates.

“I think he kind of gave the impression to do the same thing and put in as much as he does,” Greer said. “I think that’s why we were so successful is we have guys like that on the team.”

The 6-foot-2, 204-pound Greer entered college a year early and didn’t turn 18 until Dec. 14, making him one of the NCAA’s youngest players. The Montreal native played on the third or fourth line in early in 2014-15 before earning some second-line duty later in the season.

“I know what I’m capable of doing,” said Greer, who had three goals and seven points in 37 games. “I’m confident. It’s not being cocky. My confidence is something I really rely on because I didn’t have as many opportunities as I wanted this year. … But I fought through the adversity. The moments and the experiences I had at BU were unbelievable, something I’ll never forget.”

Greer met with the Sabres, who scheduled a late interview in a room packed with the team’s decision-makers.

“Kind of intimidating having 20 guys in there,” Greer said. “But a really good meeting. I think I did really well and left them with my best impression. The only thing I can kind of do is sell myself.”

The combine often features some links to former Sabres. A year ago, Daniel Audette, Donald’s son, and Dominic Turgeon, Pierre’s son, attended and got drafted.

This year, Chase Pearson, Scott’s son, was invited. The 17-year-old center looks almost identical to his father, a gritty winger who played 41 of his 292 NHL games with the Sabres from 1995-96.

There’s one difference, however.

“He gives me crap about my hair,” Chase Pearson said Saturday. “I just say, ‘Dad, look at your draft picture. You got a mullet.’”

Back in the day, Scott Pearson sported quite a mane of long hockey hair. In fact, after Toronto drafted him sixth overall in 1988, Maple Leafs owner Harold Ballard said Pearson should get a haircut.

Chase Pearson grew up in suburban Atlanta, where his family settled after his father’s playing career ended. He plans to attend the University of Maine after playing 2014-15 in the United States Hockey League.

Pearson, the 123rd-rated prospect, possesses a similar style to his father.

“He tried to instill in me what he used to do,” Pearson said.

Scott Pearson, one of the frequent fighters on the popular 1995-96 Sabres team, told his son “that he loved” playing in Buffalo.

“He said it was a great city, great fan support as well,” Pearson said.