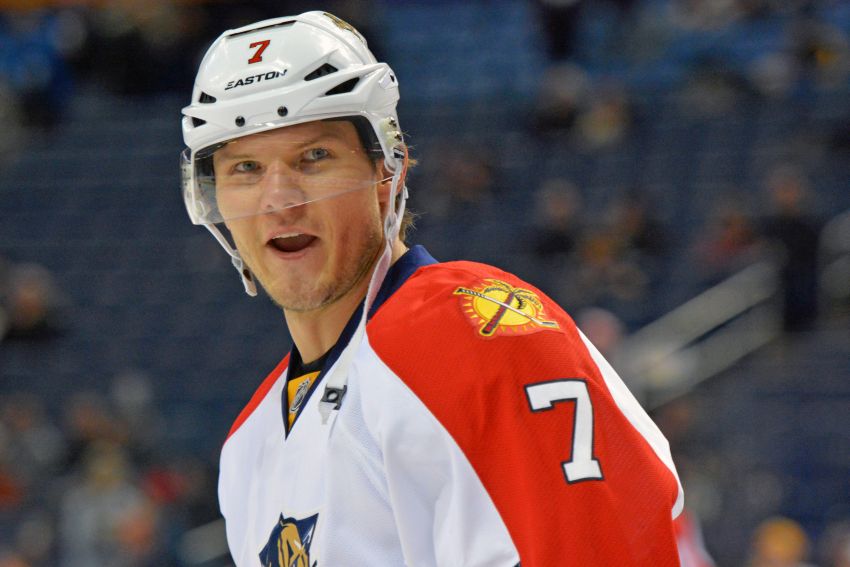 BUFFALO – When the Florida Panthers acquired Keith Yandle’s rights last week, Dmitry Kulikov was initially excited the team had an offensive defenseman in its arsenal.

“I was comfortable in Florida,” Kulikov, who was traded to the Sabres on Saturday at the draft, said this afternoon on a conference call. “I didn’t think something like that was going to go down.”

Kulikov played seven years with Florida. The Panthers, who drafted him 14th overall in 2009, were the only organization he had ever experienced.

“You feel like you’re on an island,” Kulikov said. “You know one thing. Every other organization is kind of unknown.”

That’s why he felt a mix of excitement and nervousness after the Sabres acquired him for defenseman Mark Pysyk and draft picks.

Kulikov said he’s open to any role with the Sabres. He hasn’t spoken to coach Dan Bylsma or general manager Tim Murray. Both said they want Kulikov on the first or second pair. The Sabres needed a lefty defenseman badly to balance their pairs. They also like Kulikov’s edge and defending abilities.

“(A) top-four defenseman is very prestigious,” he said. “I’m happy to be that guy and I’m happy to take over that responsibility. As I’ve proven in Florida, I’ve played against top lines. In the last few years I’ve improved a lot on my own end. Statistics show the last two seasons were really strong for me.

“I feel like I really, really picked up my game at the end of this season going into the playoffs. I can be a shutdown guy and I can be point productive.”

Kulikov’s play during the Panthers’ first-round loss to the New York Islanders and wowed the Sabres’ brass when they studied video.

“I felt like I had a really, really strong playoffs,” Kulikov said. “I think I was one of the top defensemen in Florida. I played a shutdown role. I played (against) the Islanders’ top line, and I think I stepped up. I was happy with the responsibility I was given in the playoffs. I was happy they trusted me as a top-pair defenseman. I was happy with my performance.

Check back later for a full story on Kulikov.