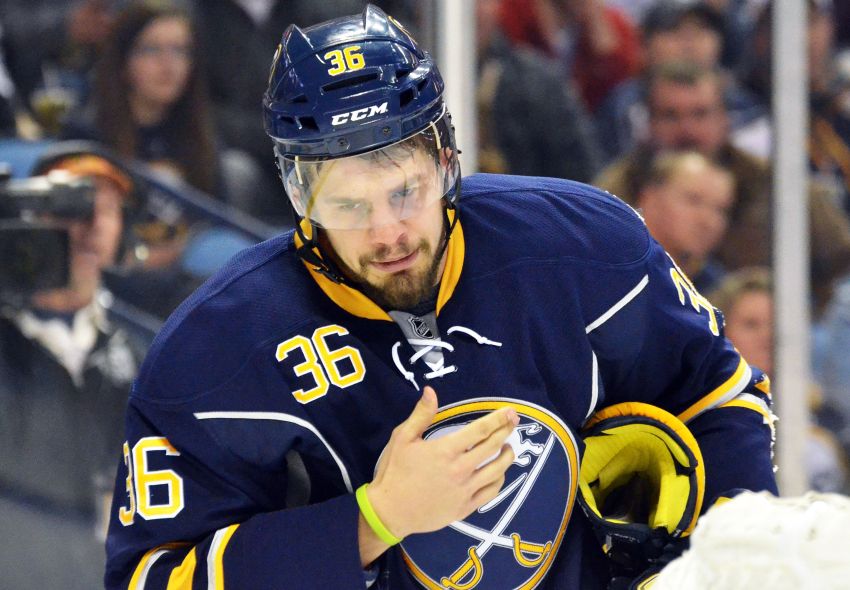 BUFFALO – Patrick Kaleta insists he has changed his game over the years, calming his ultra-aggressive style down to become a more complete and responsible player.

Players have noticed, he said. Referees have even lauded the Sabres’ top agitator.

“The referees have came up and said, ‘Hey, we respect what you’ve done so far. As long as you keep showing respect toward us, then we’ll respect you,’” Kaleta told reporters Monday in Raleigh before the NHL suspended him five games for cross-checking the Rangers’ Brad Richards from behind into the boards. “I loved hearing that knowing that they’ve seen the change in my game. So I know I’ve changed my game.”

Following a Monday afternoon phone hearing, NHL discipline czar Brendan Shanahan suspended the “repeat offender” the maximum number of games he could without meeting him in person.

Kaleta, who had two previous suspensions, can return to the lineup March 17 in Washington. He will forfeit $76,219.25 in salary. The ban starts tonight in Carolina against the Hurricanes.

He was assessed a five-minute boarding major and a game misconduct at 3:28 of the third period Sunday in New York after cross-checking Richards at the outside edge of the left faceoff circle while killing a penalty. In a scary scene, Richards tumbled headfirst into the boards, his neck twisting as he hit.

“In spite of the fact that Kaleta does not shove Richards with great force, he does so at an extremely dangerous distance from the boards,” Shanahan said in a video posted on NHL.com explaining his decision.

Shanahan also noted: “Richards does not turn his back just prior or make any sudden movements that contribute to this illegal check. Kaleta is in full control of this play, and has ample opportunity to make a better decision.”

Richards grimaced in pain on the ice for a minute or two before skating off. The center later returned to the Rangers’ 3-2 shootout win, something Shanahan noted.

He sat out practice Monday, although Rangers coach John Tortorella expects him to be fine.

The Rangers scored two quick power-play goals after Kaleta was ejected to briefly grab the lead.

“I’m sorry for the position I put the team in trying to kill that penalty,” Kaleta said. “I feel for that, putting the penalty killers out there and them getting the two goals makes me feel like a bag of garbage after seeing that. But I’m glad our team responded with that. I’m proud of it, just going to go forward.”

Kaleta didn’t offer many details about the hit itself.

“You’re playing a zone,” he said about killing the penalty. “You’re not really supposed to finish checks, etc. I just play hard. I was on the penalty kill trying to do my job.”

Does Kaleta have a message for Richards? He paused several seconds after being asked.

“It’s probably one of the most dangerous hits I’ve seen,” a “fuming” Tortorella told reporters following the game, according to the New York Daily News. “It’s ridiculous. … It’s disgusting. It’s a lack of respect. Each team wants to beat the other team, but you need to respect what’s going on on the ice.”

“I just kind of tried to collect myself, do a mental check … (then) I got in the tunnel and heard a goal right away,” he said. “We needed to get something going so at least we got something out of it.”

Opponents have loathed Kaleta for years. The 26-year-old winger’s aggressive play and history of questionable hits have put him under the microscope.

The league hasn’t reviewed Dan Girardi’s minor boarding penalty on Tyler Ennis 54 seconds into overtime. The Rangers defenseman quickly zoomed in and hit Ennis, who had his back turned, from behind as the center grabbed the puck along the end boards.

Ennis went down briefly before slowly getting to his feet.

In other injury news, defenseman Jordan Leopold (hand) is “making good strides” but will miss a little more time, Rolston said. Defenseman Alexander Sulzer (lower body) isn’t expected back “for a while.”