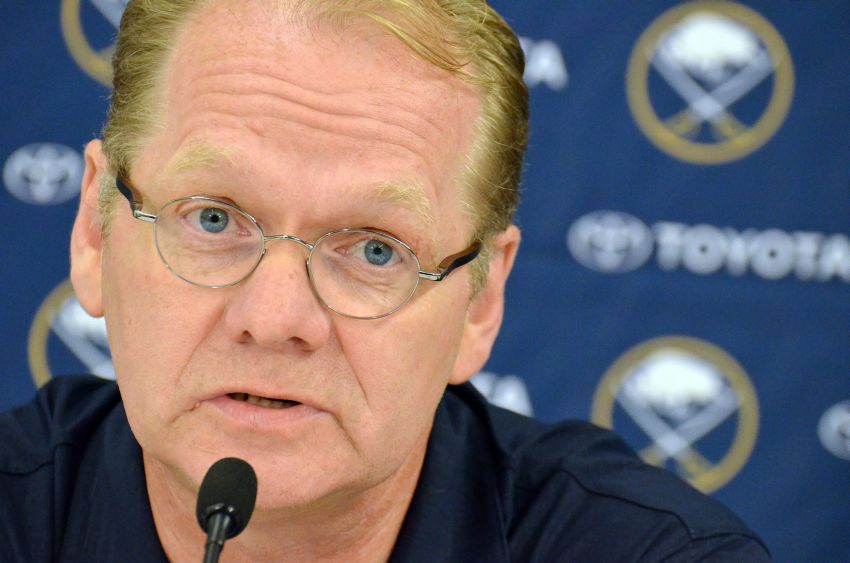 If the Sabres hadn’t dealt Roy for winger Steve Ott and defenseman Adam Pardy last week, the center, who was originally hurt last preseason, wouldn’t have underwent the procedure.

“We’re very confident in the decision by our medical staff,” Regier said Thursday inside the First Niagara Center during the second intermission of a prospect scrimmage. “He played with it last year. He could’ve played with it next year. It was a decision by the Dallas Stars. It was as simple as that. We were very comfortable with his situation and remain so.”

He noted: “It was elective, and it was a choice.”

Regier said he spoke with counterpart Joe Nieuwendyk prior to the trade and went through all Roy’s medical records. The Stars made their decision following an intense physical in Dallas.

Sabres coach Lindy Ruff, in his first chat with local reporters since April, said Wednesday’s surgery surprised him. When Roy got on track a bit late in the season after struggling for months, Ruff considered the shoulder a non-factor. Roy never indicated any serious issues, either.

“In Derek’s case, we thought we got him through the year. We thought he was going to be good to go on.”

Of course, other players – most notably goalie Ryan Miller and winger Thomas Vanek – have played through or returned early from ailments. There could be a perception around the NHL the Sabres push players to perform injured.

“It’s not the reality,” Regier said. “I’m very comfortable with our position.”

“But I’m pretty sure he can recover and again be a player we had at least a year ago or two years ago.”

Center Zemgus Girgensons, the 14th overall pick last month, could decide as soon as today whether he signs with the Sabres or attends the University of Vermont, where he committed to play next season.

“I’ll try to decide tomorrow,” the 18-year-old said Thursday after scoring a nifty goal for the Blue Team in a 7-3 win over the Gold.

Regier added: “We’ll talk to him about his desire to turn pro. Really, it has to be his decision.”

Ruff thinks the 6-foot-1, 198-pound Latvian could be ready for the AHL.

“He already has a man body,” he said. “He’s strong enough to handle the heavy bodies down there.”

In the spring, Sabres legend Dominik Hasek, despite being 47 years old and four years removed from the big leagues, declared he wanted to return to an NHL net.

Out of respect for the goalie’s career, the Sabres had two meetings with Hasek recently in Buffalo.

“I met with him once,” Regier said. “Lindy and I met with him as well, listened to him. We had our discussions and made him aware we were going to proceed with our current goaltending.”

Hasek hasn’t played since a strong KHL campaign in 2010-11. He had come out of retirement a second time in 2009 after calling it quits a year earlier.

“He was excited,” Regier said. “I think it’s tremendous. He’ll be 47 at the start of the season. I hope that he finds a team to play with. I would love to see him back in the league, and hopefully he would play well in the Western Conference.”

If one player could pull off a comeback pushing 50, it might be Hasek, a fitness nut.

“He has no doubt in his mind that he can play, and I think it probably gives him a little bit of a lift seeing someone like (Martin) Brodeur play at 40 in the Stanley Cup final,” Regier said. “So I know better than to question Dom’s desire and his ability.”

Ruff added: “We talked at length about getting ready, what it would take to get ready. The year before when he did play he was convinced with a heavy workload in July and August that he could be ready to play, and play a number of games and be effective.”

With Roy gone, Ruff said he’s confident going into next season with Tyler Ennis and Cody Hodgson as his top centers.

“It’s time for Tyler to take that step,” he said. “I think in the last 40 games he gave us a good indication … what he could do offensively. And Cody’s been looking for that solid opportunity to become that top-line centerman. I think he can do it.”

The 21-year-old’s name wasn’t even listed on the roster.

“He’s definitely opened some eyes,” said Ruff, who knows little about Wise. “(You score) three goals, and all of a sudden the chatter in the coach’s office has gone up. ‘Who is this guy?’”

Notes: Regier said the Sabres have chatted with Shane Doan’s camp. The veteran winger, arguably the best unrestricted free agent left, has delayed his decision as Phoenix sorts through its financial turmoil. … Ruff on 6-foot-8 tough guy John Scott, who the Sabres signed earlier this month: “It might give you the toughest guy in the league right now.”