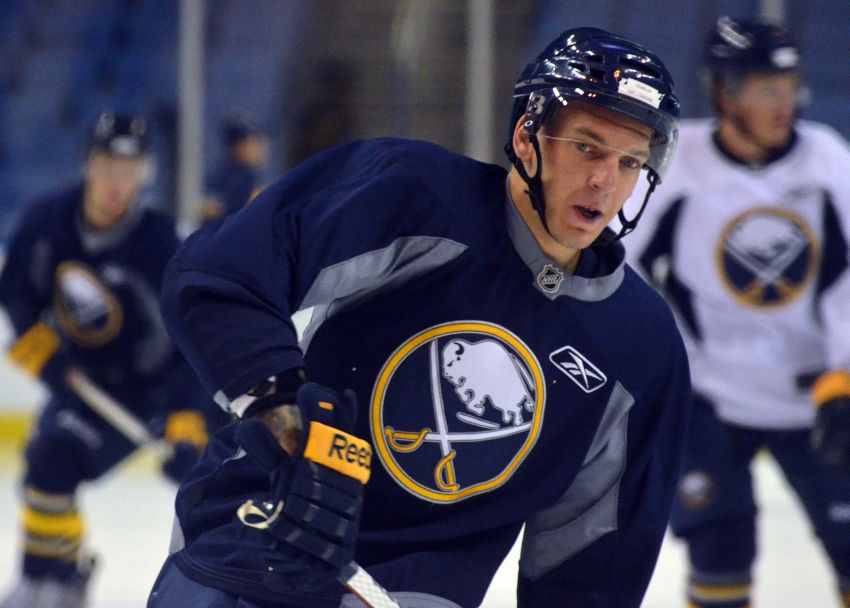 BUFFALO – Three weeks earlier, minutes after the Sabres moved up and selected center Zemgus Girgensons 14th overall at the NHL Entry Draft, the Latvian expressed his commitment to playing for the University of Vermont next season.

But Girgensons’ stance quickly changed. On Monday, the first day of summer development camp, he seemed to be seriously considering signing with the Sabres.

The 18-year-old impressed during the camp, and following a strong scrimmage performance Thursday night, he said he hoped to make a decision in a day.

Later that night, Girgensons phoned Jeff Sneddon, Vermont’s coach, and told him he would be turning professional.

On Friday, Girgensons inked a three-year, entry-level contract with the Sabres.

The deal certainly came together quickly.

“We talked about this for a day and a little bit, and it was a pretty hard decision just because I was close to … Sneddon,” Girgensons, smiling and wearing a Sabres polo shirt, said Friday inside the First Niagara Center. “This is the toughest decision I’ve ever made in my life.”

Obviously, Girgensons wrestled with his decision.

“It was laying on my mind heavy just because I was close in Vermont, and it’s a really tough decision for a kid to make,” he said. “No one was pushing me anywhere. I was the only one who made this decision.”

“I was really committed to Vermont because Kevin Sneddon’s staff is one of the best NCAA staffs,” he said. “They’re really friendly and nice. It was really tough. But after this camp I think I did pretty good, and I gave my best effort.  I (started understanding) I might have a shot at turning pro right away.”

Girgensons said Sneddon “understood everything just because we were so close.”

“He knew that this might happen, and he was prepared for it,” he said.

“It gave us … additional insight into his game and what type of game he’s going to bring,” Regier said. “We had good idea of what his game is going to be, but I think you get a different sense of the level, and we’re confident he’ll do well at the pro level.”

Girgensons, 6-foot-1 and 198-pounds, played two seasons with United States Hockey League’s Dubuque Fighting Saints. No player has ever played an NHL game the year after leaving the USHL.

He will possibly start next season in AHL Rochester. But being a physical presence with a strong scoring touch, the Sabres could give him a long look during training camp.

With Girgensons, 6-foot-8 tough guy John Scott and supreme pest Steve Ott added in the past few weeks, the Sabres have gotten bigger and tougher in a hurry.

“There’s bite to his game,” Regier said about Girgensons. “He’s direct between points A and B, and he does it forcefully, and I think that’s an important ingredient to have in the organization.”

It’s unclear how many more ingredients the Sabres will add.

“Hopefully, we can get something concluded,” he said. “I’m hopeful it’ll be in the short-term.”

“We’ve expressed an interest, and as far as offers I’m not going to comment,” Regier said.

Regier has said he’d like to add a veteran center.

“It’s something we’re looking at,” he said. “It’s a very limited marketplace right now. We’re looking at the possibility of trades. But if it doesn’t happen, we’re comfortable with the group we have.”

He also plans to “add a couple people over the next few days” for Rochester.

The Sabres have little interest in bringing back winger Derek Whitmore, whose 28 goals topped the Americans last season.

“We have not had discussions with Derek,” Regier said. “I think there’s a little bit of an understanding that he was going to search in a new direction and we were going to. But I would not rule out the possibility of him playing there. … He’s certainly a very good hockey player.”