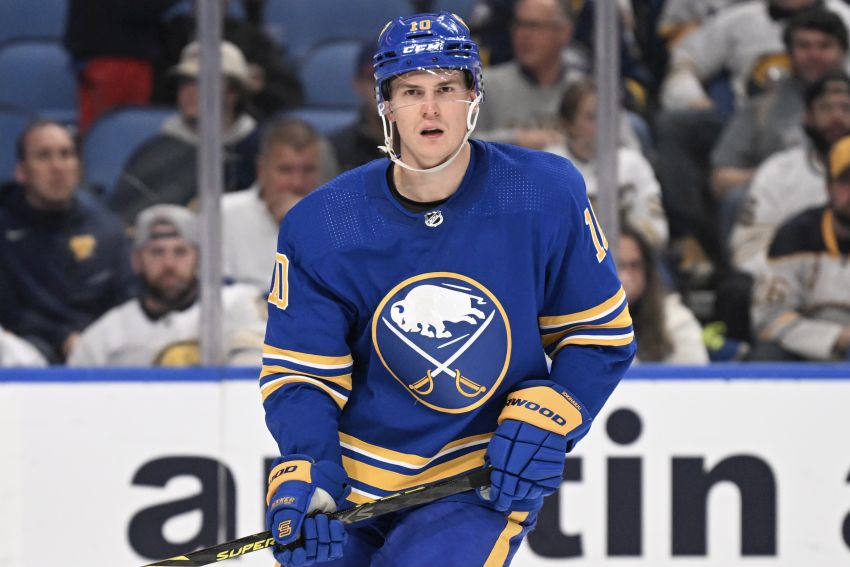 BUFFALO – Just two weeks into the season, having lost Mattias Samuelsson, Henri Jokiharju and two more defensemen in the minors to injuries, the Sabres are considering adding depth to their blue line, Kevyn Adams said.

The general manager said prior to Tuesday’s 3-2 loss to the Montreal Canadiens at KeyBank Center that Samuelsson, who suffered a lower-body injury in Saturday’s 5-1 win over the Vancouver Canucks, will be sidelined “a few weeks.”

“But much better than maybe originally we thought,” he said. “So a few weeks and then we’ll kind of go from there. He’s going to be out some time but not terrible.”

Meanwhile, Adams said Jokiharju, who was hit in the face with the puck in last Thursday’s 6-3 win over the Calgary Flames, is week to week.

Adams said the Finn has a “little fracture” under his nose “that isn’t actually overly changing his progress.”

Adams said neither defenseman needs surgery. The Sabres have placed them both on injured reserve.

The Sabres’ depth, of course, is already being tested. Samuelsson and Jokiharju each play about 20 minutes a game. Their absence leaves a huge hole in the defense corps.

They summoned Lawrence Pilut and Kale Clague from Rochester during their four-game road trip to add reinforcements.

In Tuesday’s 5-1 ugly road loss to the Seattle Kraken, every defenseman had a new partner, and it showed.

“Samuelsson and Jokiharju have just meant so much to helping the overall and the depth, so now you lose them, you don’t have the practices,” Sabres coach Don Granato said. “That’s OK, it’s still going to take time, even if we had the practices, I feel it takes time in game. …

“It’s just a process that you can’t shortcut that process. I am confident these guys are capable, and I don’t think it’s going to take long for them. I think they’ll be better today than they were the other day by virtue of having that game film and time to decompress about it.”

The Sabres might be forced to acquire another defenseman if another one goes down.

Right now, Jeremy Davies and Oskari Laaksonen are the only Amerks’ only healthy defensemen on NHL contracts.

The Amerks recently added defenseman Brandon Davidson, who spent all of last season in Rochester, on a professional tryout.

Another depth move could be coming.

“(The injuries in Rochester) happened at a similar time, so all of a sudden, you’re pretty thin,” Adams said. “We’re addressing it. … We may do something else here. For the last two days we’ve been looking at all options and across the league and scenario. What we won’t do is make big reaction-type move or emotional move. But if we think something makes sense that we could provide a little more depth for the organization, not at a cost where we’re giving up assets or anything, then maybe’s that’s something we’ll look to do.”

The Sabres can at least feel relieved Samuelsson, 22, and Jokiharju, 23, could be back next month.

When Samuelsson twisted his right leg and had to be helped off the ice, it appeared his injury was more severe.

“Your first thought is the worst-case scenario,” Adams said. “Part of it was because he’s a tough kid, too, and you saw how much pain he was in. But talking to him after, I think that was what shook him up a little bit, was just that he was in a lot of pain. The initial thought from the doctor was he wasn’t sure, we got to see an MRI, and they checked him out.”

With two extra forwards at his disposal, Granato has started a rotation. Before Krebs, winger Jack Quinn was the odd man out for two games.

“It’s not going to be, ‘You’re a healthy scratch and you’re not good enough or you screwed up last game.’ We’re healthy and somebody’s got to sit out. So we’ve done a rotation.”