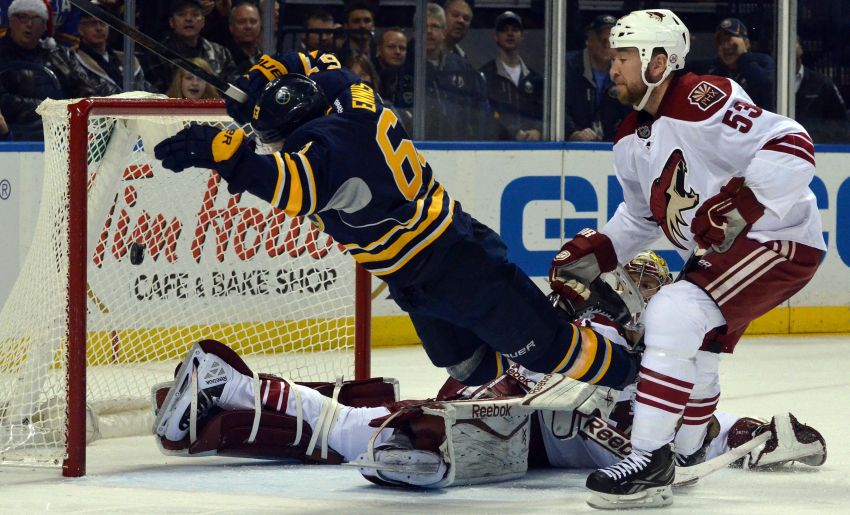 BUFFALO – No one could recall seeing a goal quite like Mark Pysyk’s wild overtime winner Monday, a score that will undoubtedly become a highlight-reel staple and earn the Sabres rookie some notoriety.

What are the odds the puck gets stuck in the goalie’s pants and he slides into the net with it?

“Nope, haven’t seen that before,” a surly Phoenix Coyotes goalie Mike Smith said after the undermanned Sabres’ exciting 2-1 triumph before an energetic crowd inside the First Niagara Center.

Pysyk, just up from the AHL, shot the puck from above the right circle before chasing down his own rebound. Smith poke-checked the puck as the defenseman approached, it went into the air and Phoenix’s Martin Hanzal batted it into Smith’s equipment. The goalie slid across the line at 3:47.

“I’ve never seen that,” Sabres goalie Ryan Miller said. “A little unlucky for Smith there. I think he’ll be shaking his head for a while.”

Oh, Smith wasn’t happy. He wanted the referee to blow the play dead.

“I guess if they don’t see the puck, they’re supposed to blow the whistle,” Smith said. “That’s not what happened.”

How did Pysyk see his second NHL goal?

“I was getting pinched off on the wall there,” he said. “I had to shoot it, go get my rebound if there was one there. I was there so I just jabbed at the puck.”

Clearly, the Sabres, who won their third straight home game, are starting to get some breaks.

“These are the kind of things that weren’t happening for us,” said Miller, who made 36 saves. “It’s a little bit of a Christmas present for us, and we’ll take it.”

Sabres tough guy John Scott added: “Who knows if their first goal actually counted? The hockey gods owed us one on that one.”

The Sabres went into their three-day Christmas break on a high from the season’s feel-good win.

“That was a gutsy performance, for sure,” interim Sabres coach Ted Nolan said.

With several players battling the flu, the Sabres dressed only 16 skaters. Then Drew Stafford was ejected for elbowing Oliver Ekman-Larsson 11:16 into the second period.

Still, the Sabres rolled three lines and used Scott everywhere. Incredibly, he started out at defense before moving back to wing and even skated on the power play.

“It was a blast,” Scott said. “It was cool going out there and actually playing in the third period.”

The home crowd, which has turned on the Sabres so many times this season, had blast, too. The 18,942 fans cheered loudly the Sabres began dictating the play as the game went on.

Clearly, the team and the fans connected and the Sabres fed off the energy.

“I think this is what sports are all about when people come to the game and enjoy it and get engaged with it and get loud,” Nolan said.

Miller added: “We were all having fun tonight. We appreciate the fans. They stuck around. … We know we’re not where they’d like us to be. That was a great effort, I thought.”

Tyler Ennis could feel the crowd roar after zooming to the net and tying the game 14:01 into the third period.

“I was pumped about that,” the center said. “It was cool.”

Scott was pumped up about getting to play pivotal minutes. Nolan was happy to play him 8:50.

“People think he’s just a big slugger and goes out there,” Nolan said. “He’s a very highly intelligent man. He knows the game. You see him on the power play, his net-front presence. He grabbed the puck, he knew what to do with it.”

Scott, who has one NHL goal, nearly scored in front of Smith.

“It’s been a few years since I’ve been on the power play,” Scott said. “I didn’t expect it. Ted just gave me the tap on the back, and I wasn’t going to look back. I jumped over the boards so fast.”

Scott said he’ll play “wherever they want to put me.”

“I think I can play D, I can play forward,” said Scott, a natural defenseman. “It was nice to go back and play defense. It’s a different way to watch the game. I feel comfortable back there.”

Hanzal scored the Coyotes’ lone 19 seconds into the period, a tip that might’ve been a high-stick. The goal counted after a lengthy review.

“I think Toronto got it absolutely wrong,” Miller said.

Nolan doesn’t think Stafford will be suspended for his elbow.

“It kind of looked like he shouldered him off,” he said.