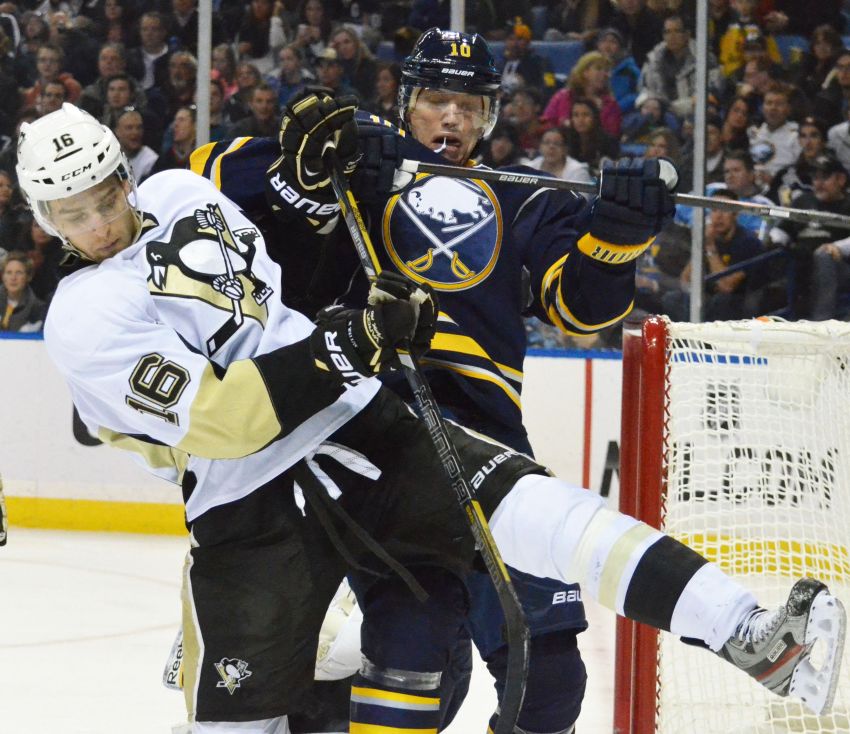 BUFFALO – The NHL tentatively postponed Friday’s game in Boston between the Bruins and Penguins until this afternoon, meaning the Sabres’ scheduled tilt in Pittsburgh tonight has been pushed back to Tuesday.

“I think everybody understands what’s going on with them,” Gilbert said. “Our thoughts are with them.”

The Pittsburgh game will close the Sabres’ road schedule.

In the wake of Monday’s attack, the Sabres ramped up security a bit, adding a couple of uniformed officers fans would notice inside the First Niagara Center, Gilbert said.

Sabres rookie Marcus Foligno isn’t new to the center position. The 21-year-old played his first two juniors seasons in the middle before switching to left wing.

“That’s why I thought I was a left wing after that,” Foligno joked Friday prior to the Sabres’ 8-4 loss to the New York Rangers.

The Sabres desperately needed some size down the middle. Foligno, 6-foot-3 and 226 pounds, provides it.

“A little surprised,” Foligno said about the move, “but I think I’m starting to like it. It’s more responsibility. It’s a pretty important role. Faceoffs, you’re in the game a little bit more with helping out the D and putting guys in the zone. So I like that, using my big body.”

What’s different about the position?

“I kind of realized I got to do a little bit more little things correctly and be attentive,” Foligno said. “Just the responsibility, there’s a lot of things coming back in your zone, figuring out the D-zone and breaking your guys out is a big part of it. I was excited … for the opportunity.”

Entering Friday, Foligno had won 63.3 percent of his faceoffs, tops among the team’s centers.

“I like just being in there,” Foligno said about the faceoff dot. “It can be huge.”

Notes: The Sabres held a moment of silence prior to the game for the bombing victims. … The Sabres scratched 18-year-old rookie Mikhail Grigorenko for the second straight game since his recall from junior.