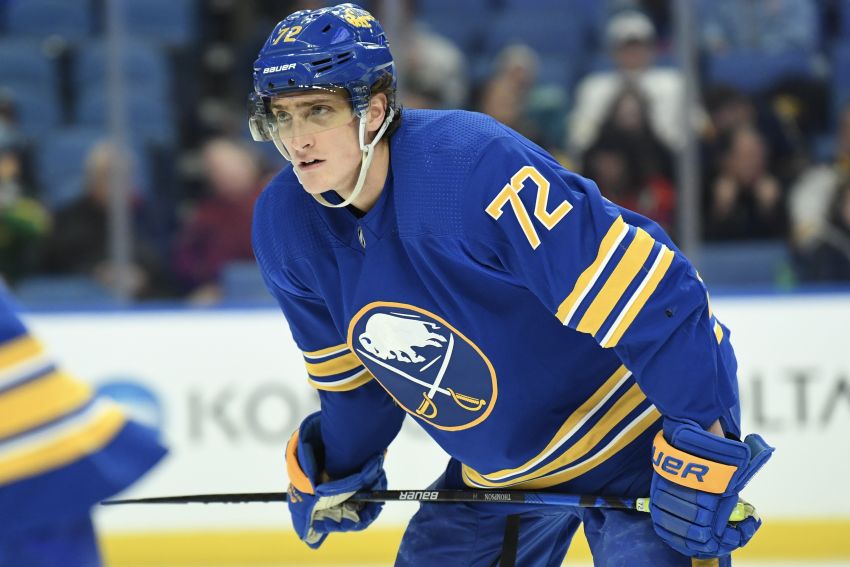 BUFFALO – Coach Don Granato knew it would happen again. COVID-19 has been clobbering the NHL, forcing hundreds of players into protocol over the past several weeks, including 11 Sabres.

“When’s it going to happen to the next guy the way it’s going around the league and around the world?” Granato said following Monday’s practice. “It happens today.”

The Sabres have often been practicing short a few players, so Monday morning, having summoned the highly skilled Quinn from the Rochester Americans, Granato was excited to utilize four forward lines and four defense pairs.

“Forty minutes before practice we lose Tommer,” Granato said. “I was excited Jack Quinn was coming up and we can put him with (Dylan) Cozens and leave the Thompson line out, look at a potential threat there, and then it goes away really fast.”

So Granato moved Rasmus Asplund from right wing beside Cozens and Anders Bjork to Thompson’s spot at center between Jeff Skinner and Victor Olofsson.

Meanwhile, Quinn skated at left wing beside Cozens, a center, and Vinnie Hinostroza.

In addition to Thompson, the Sabres have three of their top forwards – Peyton Krebs, Kyle Okposo and Alex Tuch – in protocol. Defenseman Casey Fitzgerald left protocol Monday and practiced.

“It’s the chaos of what we’re all dealing with in the league,” Granato said. “I’m not talking any pity here; it’s these are the circumstances, you deal with it. I like the way our guys skated today, they had great energy. They just move along. I say all this here, but back there the guys just move along. It’s a normal to them now, and it does not serve as a distraction, actually.”

Granato said Krebs, Okposo and Tuch are all day to day. They won’t play tonight against the Tampa Bay Lightning at KeyBank Center.

“They’re feeling good,” Granato said. “I think the way the protocols go they could’ve been potentially cleared this morning. They could potentially be cleared tomorrow morning.”

Granato said the Sabres must recall another forward before tonight’s game. Winger Brett Murray, who played 15 straight NHL games before being sent down Friday, could be the leading candidate.

Fitzgerald, who entered COVID-19 protocol last Monday, likely won’t play tonight. The American, who recently played his first four NHL games, said he “was kind of shocked” when he learned he had tested positive.

“Then the next day (I had) minor cold symptoms,” Fitzgerald said. “But the last four days I’ve been fine, just hanging out in the hotel trying to do some workouts here and there just to stay active.”

In other news, Appert said center Sean Malone, who left protocol last week, has an injury that will sidelined him a “little longer term.”

After playing just four times over a 24-day stretch, the Sabres have three games in the next five days and seven contests in the next 12 days.

“It absolutely shifts the way we operate,” Granato said. “We’ve had the practice time and we’ve made use of that. It’s … more challenging when you’re playing more games and rapid fire because you just don’t get to decompress or step back. You’re just going and you’re going to have to play a little more efficient, you’re going to have to play have some reserves when you play those number of games and throw travel in there.

“But I feel our guys did a nice job and have a good base. We get the conditioning numbers and our sports science guys are on top of it. We saw some real positive growth and efficiency for the guys coming off and out of COVID protocol, day by day getting back to normal quicker and then actually getting above normal when they went into it because we had so much time to practice and condition. So we feel we’ve got our guys back above where they were when this practice sequence started, and that was our objective.”