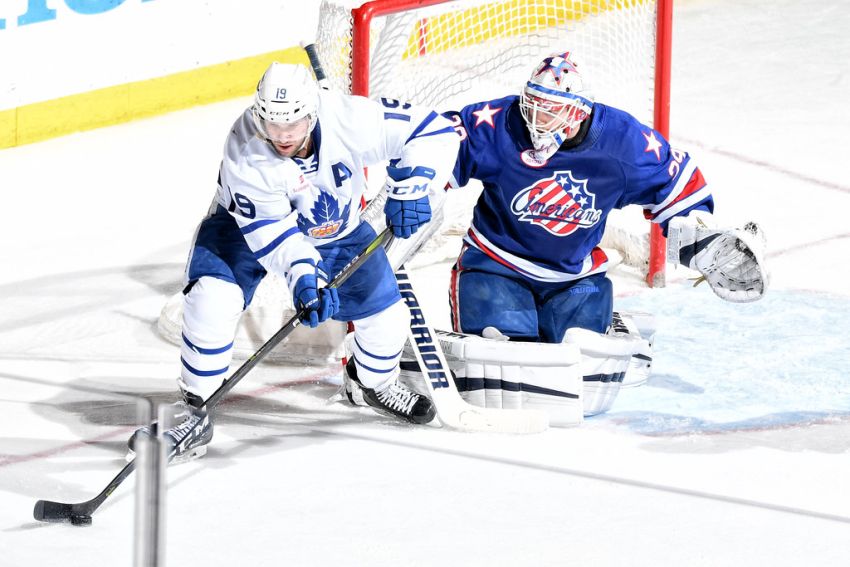 Of course, the puck never actually went in the net. The Amerks rattled it off the post or crossbar four times. They missed empty nets, a breakaway and pumped 15 shots on goal in the first period.

So instead of seizing a commanding lead, the Amerks let the Marlies hang around the intense affair.

“We came out really good … (it could’ve been) a different game,” coach Chris Taylor said following the Amerks’ 4-1 loss in Game 1 of the best-of-five North Division semifinal. “I thought there was a lot of nerves going on there. We got to capitalize on those.”

The Marlies, meanwhile, converted their chances, silencing what was a noisy crowd of 7,502 inside Blue Cross Arena.

Old friend Nick Baptiste, a former Buffalo Sabres prospect who spent three seasons with the Amerks, scored 2:53 into the second period. West Seneca’s Chris Mueller scored the first of his two goals later in the period, a power-play tally.

That was all the Marlies, the defending Calder Cup champions, needed. The Amerks will host Game 2 on Sunday afternoon.

“Deep down, they know we let one slip away,” Taylor said. “Again, we had it in our grasp, especially the first period. It could’ve been 3-0. They were on their heels.”

Yes, it was just one game, but if the Amerks, who ranked fourth in the 31-team league during the regular season, lose Sunday, they’re in deep trouble.

“This time of year, there’s no need to time to hang your head or wonder what-if or think anymore about tonight,” Amerks defenseman Zach Redmond said. “We take the positives. I thought we were the better team for a lot of the game.”

Despite letting some shots get by him early, Marlies goalie Kasimir Kaskisuo settled down, making 29 saves, including a breakaway stop on Amerks sniper C.J. Smith.

The Marlies’ goaltending has been in flux all season. Days before opening night, the Maple Leafs lost Curtis McElhinney and Calvin Pickard on waivers.

So instead of having the AHL’s most experienced tandem, the Marlies were left scrambling.

They stabilized their net by trading for NHL veteran Michael Hutchinson in late December, but the Leafs recalled him two weeks ago to replace struggling backup Garret Sparks.

So Kaskisuo, 25, earned Friday’s nod. The Finn compiled weak regular-season numbers – a 3.07 goals-against average and an .896 save percentage – in 30 outings.

“He’s a battler,” Baptiste said of Kaskisuo. “He works his (butt) off. He works so hard for us. He was great tonight. He gave us a chance in that first period. He really made some big saves for us.”

Notes: With college and junior additions and reinforcements back from the NHL, the Amerks have 31 players on their roster, meaning they scratched 11 players Friday. … Amerks winger Alexander Nylander hasn’t played since suffering a lower-body cut April 2 with the Sabres. … Forward Eric Cornel, the only Amerk to play all 76 regular-season games, was a healthy scratch Friday. … The Sabres traded Baptiste, 23, to the Nashville Predators on Oct. 1. The winger played 55 games with the Milwaukee Admirals, their AHL affiliate, before getting dealt to Toronto on Feb. 24. He played 47 games with the Sabres.