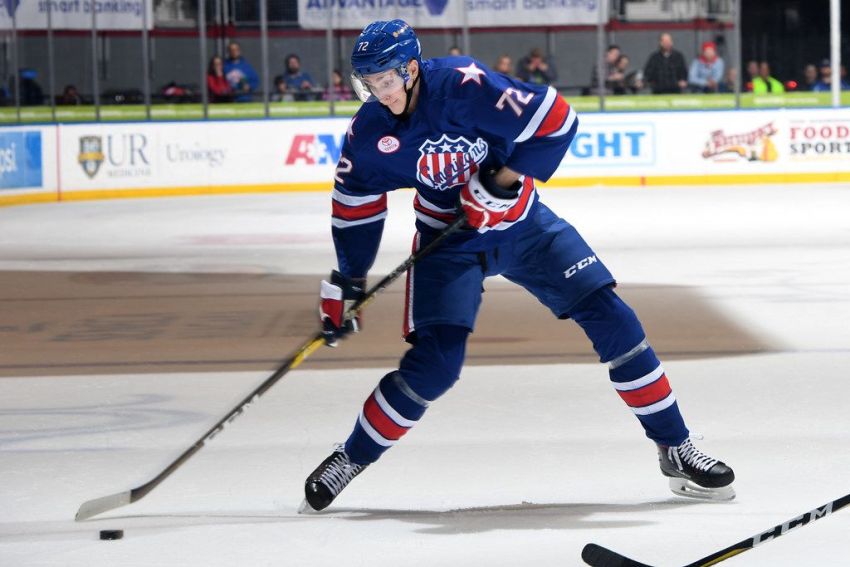 ROCHESTER – The numbers jump out at you. Through nine AHL appearances, Buffalo Sabres prospect Tage Thompson has already compiled seven goals and 10 points.

Sure, it’s a small sample size. But Thompson, 21, has often been a dynamic presence for the Americans since the Sabres sent him down March 28.

“We’re looking for him to be a big-time player for us,” Amerks coach Chris Taylor said following Saturday’s practice at Bill Gray’s Regional Iceplex in Brighton.

In Game 1 of the North Division playoff semifinal, a 4-1 loss to the Toronto Marlies, Thompson scored the Amerks’ lone goal late in the third period.

At this stage if his career, the 6-foot-5, 200-pound Thompson should be a lethal scorer in the minors. The former first-round selection spent nearly the entire season with the Sabres, playing 65 games. He has already made 106 NHL appearances.

“He’s gaining more confidence and getting to the hard areas, coming out with pucks and using his body to his advantage, because it is an advantage,” Taylor said after the Amerks prepared for this afternoon’s playoff contest at Blue Cross Arena. “I think he can use it even more. You get in guys’ hands and use (your) body and shield guys off, it creates more scoring opportunities.”

Thompson scored twice and added an assist in his Amerks debut March 29 before enjoying another two-goal night April 8. The winger has often utilized his wicked one-timer from the left circle, pumping 30 shots on goal with the Amerks.

Of course, very few AHL players Thompson’s age possess his big-league experience. Joining one of the league’s best teams has also contributed to his early success.

“I feel good, I feel pretty confident,” Thompson said. “I think it’s easy when the team’s playing well, when the team’s got success, it makes it easier to settle in right away. I’m playing with great players every night.”

The Sabres sent Thompson to the Amerks late in the regular season to help him prepare for what they hope will be a long playoff run. Embracing his first stint in the minors since February 2018 with the San Antonio Rampage has helped him thrive.

“It’s exciting,” Thompson said. “I think it’s the best time of the year. Obviously, every player wants to play in (the) playoffs. I’ve got a chance to do that here with Rochester. They’ve got a great team, they’ve been playing unreal hockey all year long. … Embracing it’s pretty easy.”

Thompson, a key piece of the Ryan O’Reilly trade with the St. Louis Blues, has accepted the Sabres’ plan for him all season.

Instead of sending him to the Amerks in the fall, the Sabres kept Thompson and scratched him seven games early.

After earning regular duty and occasionally showcasing the talents of top forwards, Thompson struggled again late and sat out more contests. He had a 23-game goal drought when the Sabres sent him down.

Thompson played up and down the lineup in Buffalo, compiling seven goals and 12 points.

“To get an opportunity to play in all (facets), all different roles … you learn so much,” Thompson said. “I think you learn more through adversity than you do through tons of success. That’s kind of something we faced as a team up in Buffalo and I faced individually.

“It’s hard being in and out of the lineup. It makes you hungry. From that, you learn a lot. I think you play with a chip on your shoulder, like you have something to prove. That’s something that I’ve taken down here.”

Despite being the only Amerk to play all 76 regular-season games, Taylor scratched forward Eric Cornel for Friday’s postseason opener.

“He’s the consummate pro,” Taylor said. “I had a good talk with him before the game (Friday). He’s all about team. He’s just (like), ‘Whenever you need me, I’m ready.’

“That’s what I love about our team. Everybody’s ready for anything.”

Based on Saturday’s line combinations, Cornel could dress this afternoon.

“I feel like I really worked hard for this team all season and worked for the playoffs,” Cornel said. “It was tough watching, but this time of the year, it’s all about the team, team first. So wherever they need me, when they need me, I’ll be ready.”