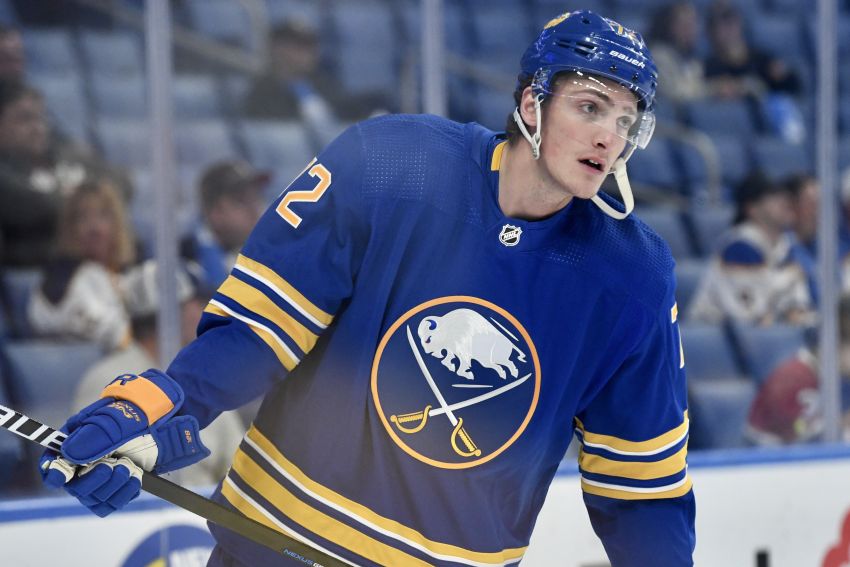 BUFFALO – Having coached Tage Thompson in junior, Don Granato learned years ago how much the Sabres’ newest center loves to be challenged.

“He’s bored if you don’t challenge him,” Granato said following Friday’s practice inside KeyBank Center. “I mean, he just likes to be pushed, he wants to be pushed.”

So earlier this month, Granato shifted Thompson from right wing to center, a more demanding position. Thompson, 23, grew up playing center and stayed there until his days at UConn, so he feels comfortable making the move.

Still, it was a significant challenge that Thompson embraced. After playing wing for five or six years, he had less than two weeks to reacclimate himself to the rigors of the position before Thursday’s season opener.

“It’s a little bit more of a challenge, but I’m just trying to embrace it and make the most of the opportunity,” Thompson said.

For now, Thompson appears to be staying put. The Sabres were woefully thin at center before Casey Mittelstadt, their top pivot, suffered an upper-body injury in Thursday’s 5-1 win over the Montreal Canadiens. Granato said Mittelstadt will miss at least two weeks.

So the Sabres will likely start this afternoon’s home game against the Arizona Coyotes with Thompson, Dylan Cozens, Arttu Ruotsalainen and Cody Eakin as their four centers.

Only Eakin, who endured a brutal 2020-21 season, scoring just three goals in 46 outings, has extensive NHL experience at the position.

“We have guys that are going to be capable of stepping up and filling that role,” Thompson said of losing Mittelstadt. “I think everyone is just going to pull together and I think it’s going to make us a little bit stronger.”

Cozens spent the early portion of his 42-game career as a winger. Ruotsalainen, a healthy scratch Thursday, made his first 17 appearances last season as a winger, although he played center in Finland and the AHL.

The dearth of center talent forced Granato give Ruotsalainen and Zemgus Girgensons a long look in the middle during the preseason.

Right now, Cozens, 20, is the new No. 1 center. The Yukon native moved up from the third line during Friday’s practice and replaced Mittelstadt between Jeff Skinner and Vinnie Hinostroza.

“I’m ready to step up, I want to take as much responsibility as I can to step up and do what I can to help this team win,” Cozens said of his promotion.

Cozens, the seventh overall pick in 2019, looked impressive Thursday. His dogged backcheck – he pursued Josh Anderson and stripped the puck from him near the penalty boxes – created winger Victor Olofsson’s power-play goal.

Olofsson’s goal 17:05 into the second period – Cozens did not earn an assist – effectively sealed the game.

“It … brings confidence knowing that I made an impact,” Cozens said. “Whether I’m on the score sheet or not, it doesn’t really matter to me as long as I’m making an impact.”

Prior to that shift, Granato said TV timeouts, power plays and penalty kills contributed to Cozens sitting on the bench for 10 minutes of real time. Granato said he wanted to “get him back in the game as quick as I could.”

“He’s, I guess, maturing before our eyes,” Granato said. “He’s picking up more detail and playing harder. He’s elevating his game in game intensity. And we see it in practice. Most of the stuff you see in practice before you see in a game. He’s taking practice a lot more serious and that’s a good sign.”

Meanwhile, the 6-foot-7 Thompson, who scored a power-play goal Thursday, enjoyed a strong night between Olofsson and Rasmus Asplund on the second line. Thompson skated 17 minutes, 5 seconds, the fourth-highest total of his career.

Granato believes Thompson’s talents will help him grow into playing center. Moving to the middle, for example, expands his vision.

“It fits his skill set,” Granato said. “He picks up a lot peripherally and now he can pick it up both sides instead of being wedged in a wall as a wing would be. So I think that excites (you). When he moves around, he’s a better player. I think when he moves east-west, lateral, more skills within his skill set come out.”