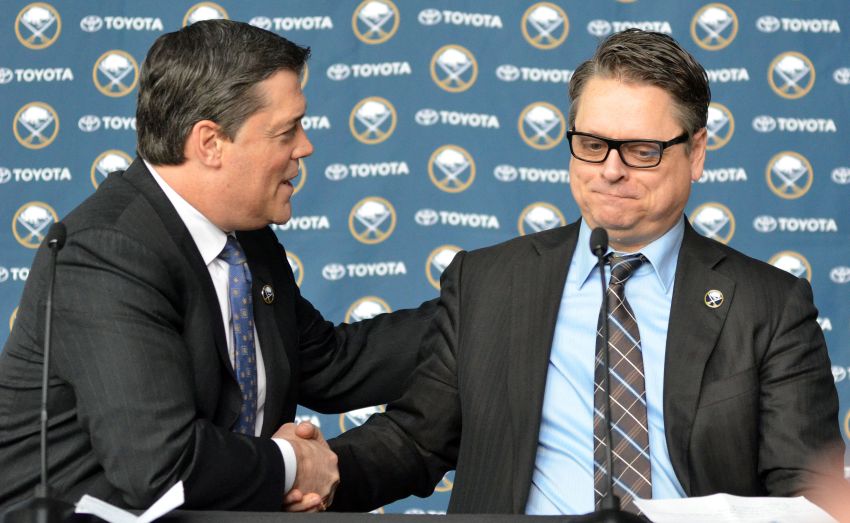 LaFontaine will return to the job he had with the NHL.

According to TVA’s Renaud Lavoie, the last straw for LaFontaine was Friday’s blockbuster deal in which the Sabres sent Ryan Miller to the St. Louis Blues.

LaFontaine wanted to give the 33-year-old Miller an extension. New general manager Tim Murray, who LaFontaine hired in January, wanted to deal the franchise goalie.

Meanwhile, TSN’s Darren Dreger reported there was no power struggle and LaFontaine wanted to return to New York.

In less than a day, the Sabres traded Miller, the face of the team, their captain, Steve Ott, and lost the head of their hockey department.

Based on recent words from Murray, it appeared Nolan, someone LaFontaine has vouched for, would be receiving an extension soon. Now, his future is in doubt.

LaFontaine, whose No. 16 hangs from the First Niagara Center rafters, brought credibility and hope to the Sabres after the team became a laughingstock amid one of the worst starts in NHL history.

“I would like to thank Pat for all he has done for the organization,” Sabres owner Terry Pegula said in a statement. “Pat joined us at a very difficult time and helped transition the organization down a new path.

“Tim Murray will continue as general manager and Craig Patrick will continue as a senior hockey advisor. As has been the case since I bought the team, we’ll continue to do whatever is needed to rebuild the organization and keep it on path towards our ultimate goal of winning the Stanley Cup.”

LaFontaine said in a statement: “Terry Pegula hired me in November and my primary objective was to lead the Sabres organization through a time of transition. I’m proud of what we’ve been able to accomplish in a short period of time and want to thank Terry and Kim Pegula for the opportunity and their support during my time with the Sabres.

“I also want to convey my best wishes to all of the players in the Sabres organization and to wish them the best of success in the future. Most importantly, I want to convey my heartfelt appreciation to the great fans of the Sabres for the way I have been treated here as a player and as an executive.”