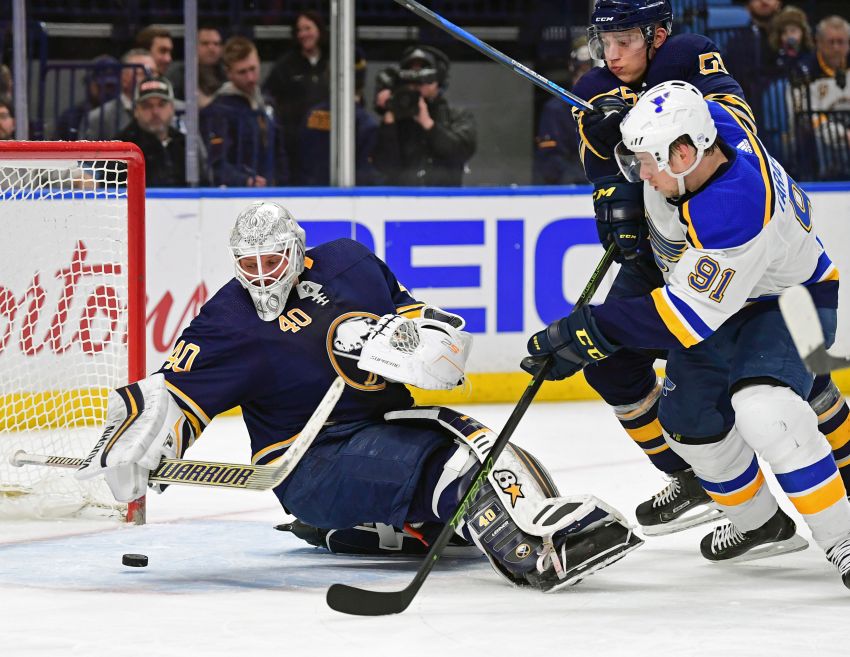 BUFFALO – Progress is measured differently for the 2017-18 edition of the Buffalo Sabres, the NHL’s second-worst team.

But these days, just taking a strong team like the Blues, a Western Conference heavyweight for years, is a good sign.

Don’t tell that to Sabres center Jack Eichel, though.

“As a group, we can’t be satisfied with playing well against a good hockey team,” he said. “Those are games where you need to find a way to get a goal, come up big. Someone’s got to step up there. Myself, I got to step up and get something there.”

Two nearly stepped up in the final 31 seconds. First, with the Sabres enjoying a power play, Blues goalie Carter Hutton stymied Sam Reinhart’s shot at the crease with his right skate.

“That’s a tough one to swallow at that point of the game,” Reinhart said. “I’ve got to find a way to put that one on net.”

Hutton said: “I get my skate to the post all the time and I’m able to get a little leverage. I think it jammed him a bit and he tried to get it off quick and luckily enough I get a skate on it.”

Carl Gunnarsson scored the game’s only goal off – you guessed it – the crossbar with 5:41 left.

“They score one bar and in and they back off,” Lehner said. “We get a bar and out.”

Sabres coach Phil Housley said: “It’s whoever’s going to get that bounce, really. You can’t fault our guys for the way they played. It’s a good hockey team.”

Lehner, who was screened on Gunnarsson’s shot, dazzled all night, making 32 saves. He was at his best during the first half of the third period, keeping the Sabres in the game.

“The first 10 minutes of the third, I don’t think I’ve ever seen a span like that out of a goaltender,” Reinhart said.

Lehner has rebounded nicely after struggling much of January, posting a .976 save percentage in his last four outings (120 of 123 shots).

The Sabres settled down later in the third period and began peppering Hutton, who made 27 saves in his third shutout this season.

“We just needed to realize that we don’t need to sit back against a team like that,” Reinhart said. “When we are playing our best, we can take it to anybody. I think we showed that after they got that bounce and even a little before that, I thought we were starting to turn it around.”

Eichel added: “We threw a lot at them in the last 10 minutes.”