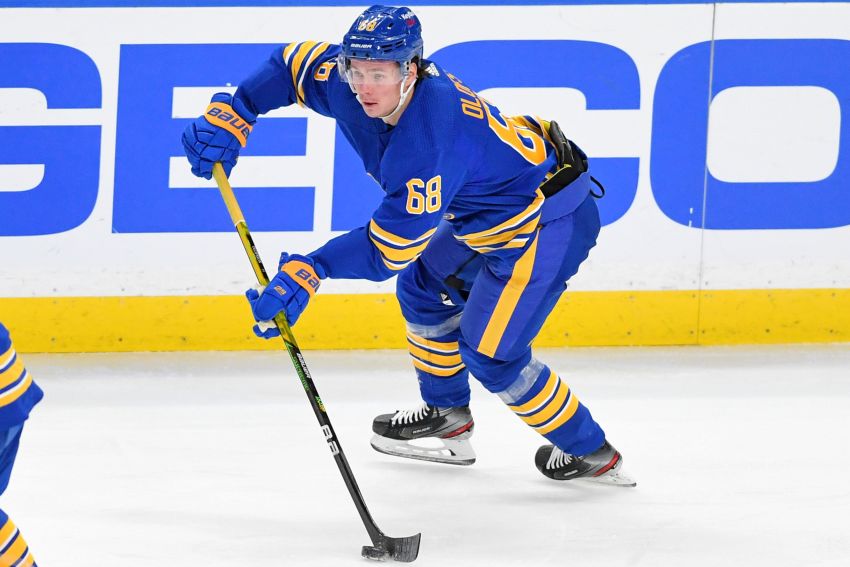 BUFFALO – In the not-so-distant past, the Sabres might’ve lost a game like Saturday afternoon’s 4-3 shootout win over the New Jersey Devils.

The Sabres looked disjointed much of the day, uncharacteristically taking a string of penalties and blowing two leads, including one in the waning minutes.

“That’s a sign of good teams,” Sabres center Eric Staal said of finding a way to win. “When you’re not at your best, you’re still picking up points in the column. I think we’re still taking steps.”

Maturity has kept buoying the Sabres, who have registered points in five straight outings. They’ve trailed in each of their last three wins before roaring back.

On Tuesday, the Sabres eked out a 3-2 win over the New York Rangers. On Sunday, they won a 4-3 shootout over the Washington Capitals.

“Definitely the character in the room and the language and calmness in our group, we’re much, much calmer than last season with going up, going down, tie games,” Krueger said on a Zoom call. “The language is good. I’ve told you all it’s good we have this adversity early already, it’s making us more resilient for these kind of games and understanding that it’s going to be like this every day.”

Sabres captain Jack Eichel secured Saturday’s win inside KeyBank Center, scoring in the first round of the shootout. Goalie Linus Ullmark then slammed the door, stopping all three of New Jersey’s attempts.

The wins have vaulted the Sabres up to fourth place in the new East Division.

Update: The Pittsburgh Penguins’ 5-4 overtime time win against the Rangers dropped the Sabres to fifth place.

For a few minutes, it appeared the Sabres might earn a regulation win. Winger Victor Olofsson’s power-play goal from the right circle – defenseman Rasmus Ristolainen moved up front and screened goalie Scott Wedgewood – put them up 3-2 10:56 into the third period.

Eichel missed that power play and a chunk of the third period after he took a puck up high, according to the MSG broadcast.

“We kind of wanted to, especially with Risto in front, just keep it simple, get pucks to the net,” Olofsson said of the power-play strategy without Eichel.

The Sabres had remained disciplined for two weeks, consistently staying out of the penalty box before Saturday. But they were whistled for a season-high five infractions against New Jersey.

Andreas Johnsson briefly put New Jersey up early in the third period before Rieder knotted it at 2:18.

Staal has quietly been showcasing more comfort, generating offense while entrenching himself as the Sabres’ No. 2 center.

“Definitely the confidence is continuing to grow and get better every day within our structure and the type of game that I can play,” said Staal, who was acquired in an offseason trade from the Minnesota Wild. “I think the body’s felt good.”

Staal also felt good beside Taylor Hall, his new left winger. Hall assisted on Staal’s goal before registering another one when Olofsson scored.

“When you’re out there with a guy like Taylor Hall, he draws so much attention to him,” Staal said. “He can really drive the puck up the ice. You’ve got to make sure that you’re in the right spot and help out as much as you can.”

The Sabres host the Devils again this afternoon.