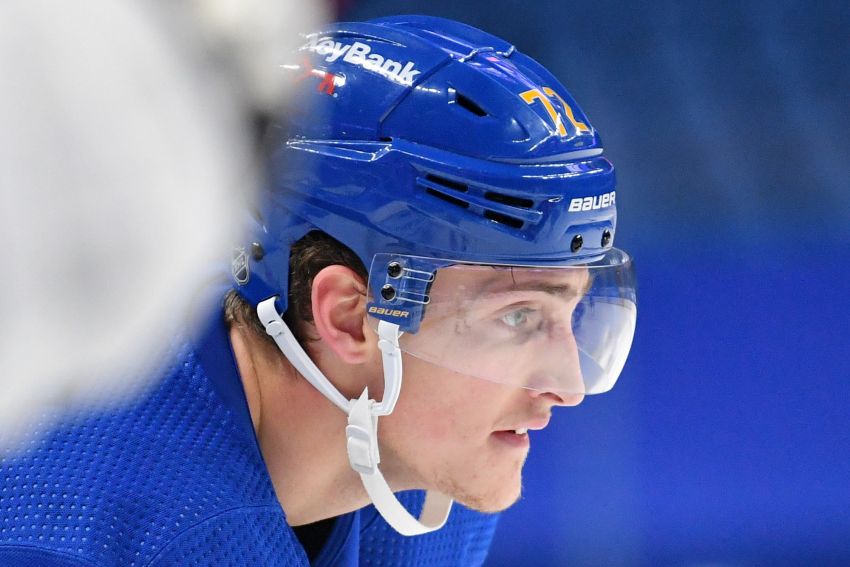 BUFFALO – After skating on the fourth line all season, Sabres winger Jeff Skinner found himself in a familiar spot with top center Jack Eichel late in Saturday afternoon’s 4-3 shootout win over the New Jersey Devils.

“We just weren’t pleased with five-on-five scoring-chance production so we mixed things up,” Krueger said on a Zoom call.

Skinner, of course, occupied a spot beside Eichel throughout most of the 2018-19 season, when he scored a career-high 40 goals.

But Krueger separated the duo last year, only reuniting them days before the season ended. This year, Skinner has played every game with Lazar and Sheahan.

While that line has been effective, Skinner remains goalless.

The 6-foot-7, 219-pound Thompson received an opportunity because an upper-body injury forced Reinhart to miss his first game since March 28, 2017.

Thompson had sat out three straight games and four of the last five as a healthy scratch.

“Like with anybody that comes into our style of play, it’s the responsibility everybody must carry away from the puck and he has been a student over the last few games and in between,” Krueger said before the game. “We spent time with him on that part of the game and the physicality that’s needed and the positional play that we expect.”

Thompson, 23, enjoyed a stellar training camp, earning a spot beside Eichel. But he struggled early, going pointless in four outings. He quickly lost his spot in the lineup.

Prior to January, he hadn’t played a game in nearly 14 months after injuring his right shoulder and undergoing surgery last year.

“He was out of hockey for longer than anybody here on the roster, so for him to get up to speed on all these things is going to take a little bit more time,” Krueger said.

Krueger said Reinhart, who was injured in Thursday’s 3-2 overtime loss to the New York Rangers, is day to day. Rookie winger Dylan Cozens replaced him on the top power-play unit.

Hutton hasn’t played since getting hit in the head Jan. 19. He has, however, backed up Linus Ullmark the last three contests.

“If you look at him, he’s back very close to 100%,” Krueger said of Hutton. “He needed, for sure, another day before he’s there. Linus’ confidence is growing and building.”

Ullmark has started five straight games. The Swede stopped all three of New Jersey’s shootout attempts Saturday and has thwarted nine of the 10 chances he has faced this season.

His career shootout save percentage of .857 ranks second all-time among NHL goalies who have faced at least 20 shots.

During a timeout, the Sabres congratulated Devils coach Lindy Ruff for coaching his 1,500th NHL game Thursday. Ruff coached the Sabres from 1997 to 2013.