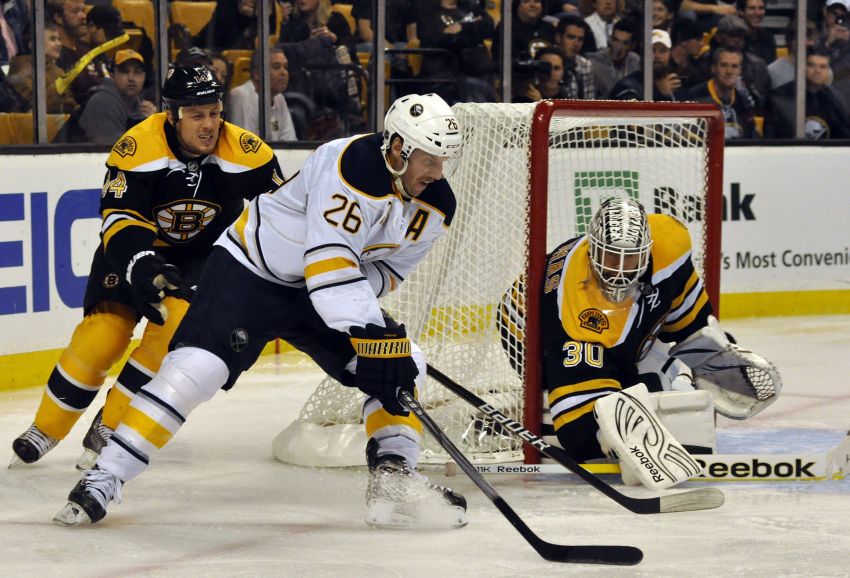 At times, Vanek still utterly dominates the game like few players can these days. See the beginning of 2008-09, the end of 2009-10 and the start of his past one season for proof.

For long stretches, however, the Austrian’s barely an above-average scorer, even invisible occasionally.

He had 23 goals two years ago before scoring five in the final two games, the same season he had only 53 points. In 2011-12, he suffered a stunning in-season decline following one of the NHL’s hottest starts.

Vanek had eight goals and 15 points during 10 October games and 18 goals and 39 points following an assist in his 38th appearance Dec. 31.

Then, suddenly, Vanek’s career season morphed into one of his worst. He scored four goals and 11 points over a 34-game winter stretch, becoming a non-factor most nights.

Clearly, Vanek, who endured two big hits and missed four games, was battling injuries (to his credit, he wouldn’t reveal anything after the season).

“I got an opinion about my game,” Vanek said in April. “I thought the first half was good, the second half I couldn’t find my game anymore. That’s my fault.”

At this point, as a veteran entering his eighth season, Vanek might never reach the superstardom many predicted for him earlier in his career.

But he’s still an asset, even with his mammoth contract. He did most of his early scoring as a third-liner in a more open game. He’s developed into a mature, two-way player who earned a letter last year.

Here’s a full look at the team’s wingers heading into the summer.

Vanek’s never had a truly bad season. His career lows – 25 goals and 48 points – came during an enigmatic rookie season. Each year, he usually plays like a star for stretches, even it’s only for a couple months.

After struggling five years ago, he still scored 36 goals. He hit 40 four years ago and legitimately flirted with 50 before a broken jaw sidelined him. He was lethal during the 2010 postseason. He was dynamic early last season.

The unflappable Pominville is the Sabres’ steadiest and most valuable player. In a season full of colossal disappointments, the likable captain was the team’s only consistent force.

He endured one slump, a six-game point drought during the winter. Other than that, he only went pointless in more than two games once, a remarkable run on a team featuring an anemic offense for five months.

Pominville started slowly offensively for years, yet still reached some strong numbers. Last season, his first wearing the “C,” he began the season hot and never let up.

Kaleta, a ferocious hitter, has developed into a strong checker capable of playing big minutes. By the winter, he began playing 18 minutes some nights on a top checking line with Paul Gaustad and Nathan Gerbe.

Still, Kaleta can’t stay healthy or in the lineup. Incredibly, his 63 games were eight more than his career high. A groin injury shelved him 12 games early, and then a broken thumb cost him three late.

Prior to that, the league banned Kaleta four contests for head-butting because of his repeat-offender status.

It’s hard to imagine Kaleta enjoying a long career if he keeps getting hurt.

When Kaleta became a restricted free agent two years ago, the Sabres elected for arbitration, a tactic rarely used, before reaching terms.

Just a year into a six-year, $27 million contract, some believe Leino may already be the biggest free agent bust ever.

The Sabres desperately wanted a center last summer, so, with the market woefully thin, they gambled on Leino, who had just completed a 19-goal, 53-point season with Philadelphia as a winger.

A pivot at home in Finland, Leino was a winger again by Oct. 22. He moved back to center for a time, and then shifted back to the side again, this time for good.

Leino has no problem expressing his feelings on any subject, something the Sabres likely loathe. If he has another poor season, what could they do with him? Given his contract, he’s probably untradeable.

Following a breakout 32-goal season (in only 62 games) and a hefty new contract, Stafford struggled again, resembling the player who had appeared on his way out prior to 2010-11.

Stafford caught fire late, however, compiling 12 goals and 26 points in February and March to reach some respectable numbers. He’s was lethal, probably as good as ever, on the right wing late beside Tyler Ennis and Marcus Foligno.

Ellis, who has a one-way contract next season, is one of the NHL’s hardest-working and most genuine players. It may sound trite, but his commitment makes others around him work harder.

Despite being a fourth-liner, entering last season, the Sabres had a .641 winning percentage when he played and a .541 one when he didn’t.

His value will never be measured in goals or points.

Gerbe, an elite scorer in the NCAA and AHL, appeared to be developing into a strong NHL threat late in 2010-11, tallying nine times in the final 20 games and seven times in March.

But the diminutive American, despite some great work as a checker, regressed offensively last season, showcasing an alarming lack of finish. He probably topped the Sabres in botched chances.

Gerbe’s talented enough to score 20 or more goals annually. But if he doesn’t next season, you wonder if he ever will.

After a pointless NHL debut in December, Foligno became a star during 13 late-season games, showcasing incredible chemistry with Ennis and Stafford.

Foligno developed into an elite prospect and projected as a strong NHL player. But is he really going to score 35 goals and 76 points, his pace last season, over a full campaign?

Tropp became a regular during the Sabres wild winter run, playing 21 straight games. He’s terrific in the corners, fearless and might have 20-goal potential.