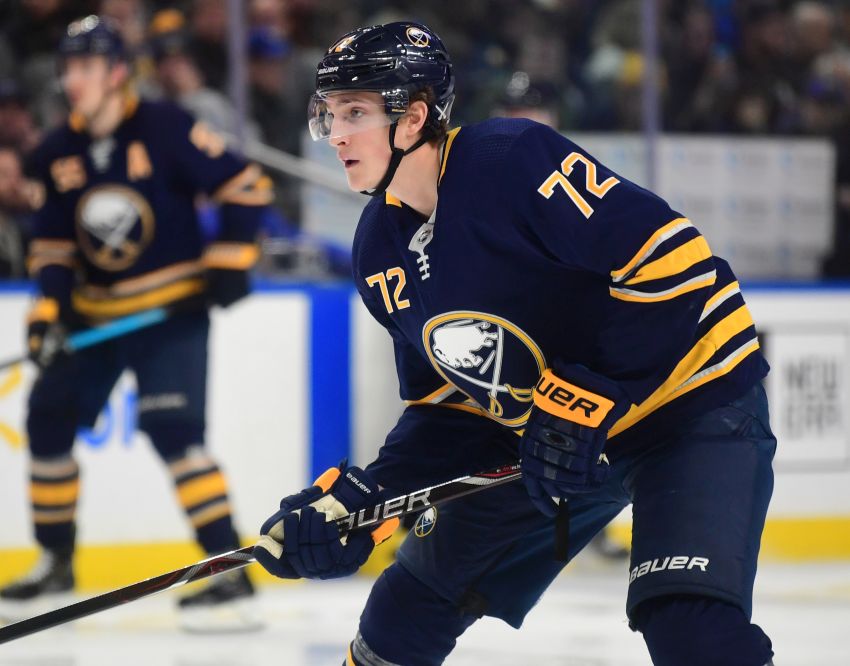 BUFFALO – Not long before Sabres winger Tage Thompson began his freshman year at UConn, he was 6-foot-1 and 160 pounds.

Then Thompson experienced a growth spurt over the summer of 2015. By the time he got to campus, he was a lanky 6-foot-4 and 180 pounds.

“So three inches and 20 pounds over the course of a summer,” Thompson said Friday inside KeyBank Center. “Then that following year, (I) grew another inch, put on a little more weight.”

Today, Thompson is 6-foot-6 and the Sabres’ tallest player. But at only 205 pounds, he needs to pack on some weight.

“It’s been about three years that I’ve been this way,” Thompson said after the Sabres prepared for tonight’s road tilt against the Boston Bruins. “Hopefully I’m still filling out. Hopefully the growing part’s done. I don’t want to get any taller.”

Thompson, 21, is still getting used to his body and learning how to utilize it effectively.

After a strong training camp, Thompson started slowly this season, mustering just one assist in the first 13 contests. The former first-round pick, a major piece of the Ryan O’Reilly trade with the St. Louis Blues on July 1, looked raw.

“There was times where I think his puck battles weren’t as strong as where they needed to be,” Sabres coach Phil Housley said.

Thompson’s season began to change about a month in when the Sabres scratched him seven times in nine games. The youngster embraced the team’s development plan for him, working closely with the coaching staff on and off the ice.

“Maybe you’re putting a little too much on yourself and pressure to produce points and you’re not playing as well as you know you’re capable of,” Thompson said. “I think when you sit out there, you take a step back and kind of just regroup. I think that was big for me.”

Shortly after the Sabres inserted Thompson on Nov. 10, he scored four goals in a six-game stretch before enduring another dry spell.

But prior to scoring his first goal in 15 contests in Thursday’s 4-3 win against the Florida Panthers, Thompson was consistently generating chances, showcasing the talents of a speedy power forward. Thompson, who possesses a lethal shot, has pumped five shots on net in each of the last two games.

“It was just a matter of time,” Thompson said of Thursday’s goal. “I try not to think about that too much. When you’re going through a little bit of a dry spell, you try to keep doing the things that are getting you chances.”

Attacking the game, according to Housley, has helped Thompson create many of those chances.

“He’s just developed and matured in a way where now … he knows how to use his body and strength to get a puck over the body or guard and protect the puck,” Housley said. “It just seems like over the last 10 games he’s been able to use that leverage to create separation. I really like the way he’s used his speed off the wing.”

Thompson, of course, doesn’t have to lay guys out to become physically engaged.

“Maybe not blowing up guys, but just bumping in, using my body, being aggressive on the forecheck,” Thompson said. “That gets me involved in the game.”

“Once I do that, I feel more comfortable and I get moving my feet. I think when I’m moving my feet making plays, I’m a lot better. As soon as I start standing still, that’s kind of when my game starts to deteriorate.”

Housley said Thompson, whose ice time has been rising, has also transformed his defensive game. Earlier in the season, for example, he kept losing his man.

“He’s taken ownership in that and … he’s reliable and trustworthy,” Housley said. “I think all those things and all those combinations come with a little bit of maturity. …

“He’s really using his strengths and focusing on the speed and the shot, which is very, very deadly.”

Sabres winger Jason Pominville said of Thompson: “He’s playing with a lot more confidence, for sure, using his size. I think he’s getting in on the forecheck and is able to create a lot of stuff with having a good stick, and he’s shooting the puck, which is his best asset.”