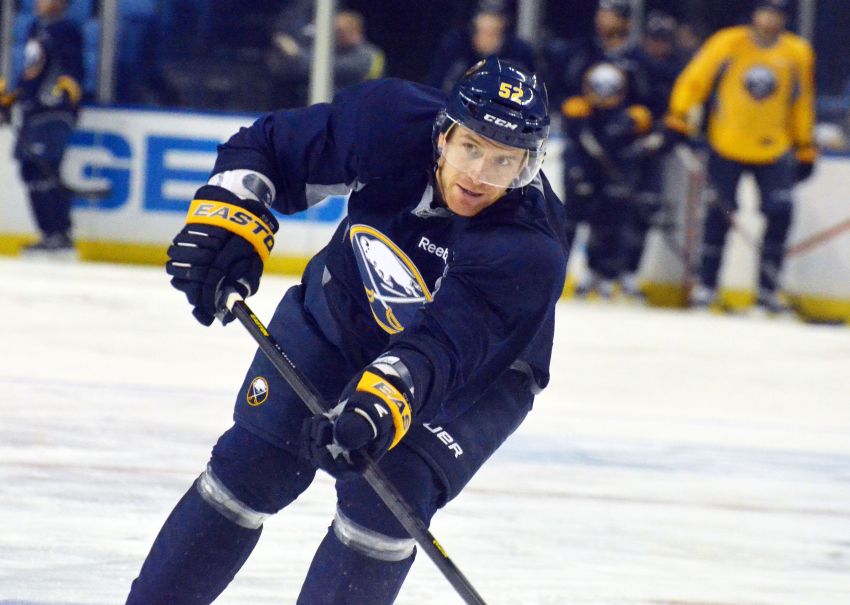 BUFFALO – The 15th-place Sabres will make one lineup change for tonight’s tilt against the Boston Bruins inside the First Niagara Center, inserting tough guy John Scott for Cody McCormick up front.

Sulzer, who scored the game-winner Saturday, will sit his second straight contest. The German, despite three goals and a team-best plus-4 rating, has made some big gaffes.

Sulzer wasn’t sure if he’ll sit.

“Every time you’re not getting to be dressed and play it’s frustrating,” he said. “But I guess there’s not a whole lot you can do about it except working hard every day.”

He added: “It’s a really tough decision for the coach when you have a lot of guys who can play.”

Sulzer, who ranks fifth on the Sabres in goals, has never scored at this pace before. He had four goals in 89 NHL appearances prior to this season.

The Sabres, losers of two straight, fell to the Bruins, one of the league’s stingiest and toughest teams, 3-1 here on Sunday.

“I think that group of six defensemen is tough,” Ruff said. “With (Zdeno) Chara back there playing half the game, he’s one of the best defenders in the league, one of the strongest. They’ve got excellent team speed, maybe the best team speed in the league.”

Related: Ruff ready to ‘clean up’ struggling Sabres: ‘It’s on me’

Thornton out 7-10 days with concussion after fighting Sabres’ Scott