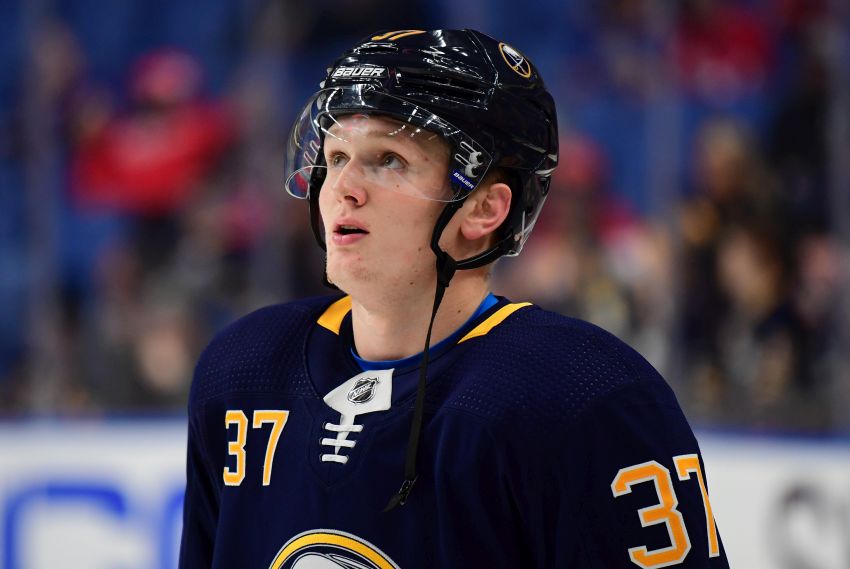 Casey Mittelstadt can finally settle down in Buffalo. ©2018, Hickling Images

TORONTO – Finally, after two whirlwind years, Casey Mittelstadt can settle down. Barring a disastrous training camp, the slick Sabres prospect will start the season in Buffalo, a place he will likely stay a long time.

“I’m definitely looking forward to that,” Mittelstadt said of remaining with one team. “I think – Green Bay, high school, the ‘U’ – I’ve been back and forth quite a bit.”

Mittelstadt, of course, left out two clubs he represented: Team USA and the Sabres, for whom he left the University of Minnesota following his freshman campaign last winter.

So if you’re counting, Mittelstadt has played for five teams since he started the 2016-17 season with the junior United States Hockey League’s Green Bay Gamblers.

Last season, the center played for three clubs: the Gophers, the U.S. at the World Junior Championship in Buffalo and a six-game stint with the Sabres.

Still, as dizzying as Mittelstadt’s life became, the former eighth overall pick has no regrets. He did things his way – he stayed at Eden Prairie High School in Minnesota to chase a state championship and fulfilled his dream of playing for the Gophers – yet still cracked the NHL as a teenager.

“I completely enjoyed it,” Mittelstadt said of his journey. “I got to meet a lot of good buddies and a lot of good things like that. It’s been a little bit of a whirlwind, I think, moving and going back and forth places. But I’ve loved it, so I won’t complain too much.”

So far, Mittelstadt has loved his new NHL life. He spent Sunday inside the MasterCard Center, the Toronto Maple Leafs’ practice facility, posing for photos in his blue No. 37 Sabres uniform at the NHLPA Rookie Showcase, an event to photograph first-year players for trading cards and other material. Sabres prospect Rasmus Asplund, Mittelstadt’s friend and another young center, also participated.

Clearly, Mittelstadt feels comfortable with the Sabres. Right away in March, star center Jack Eichel and others reached out and helped him acclimate to the big leagues.

Then in mid-July, Eichel went out to Minnesota to join some Sabres who have Minnesota roots for some golfing and fun. Six players and coach Phil Housley played a round and enjoyed dinner.

Even in the darkest days of last season as the Sabres trudged to a 31st-place finish, players insisted they had become a tight-knit group. For Mittelstadt, the summer get-together proved that.

“Last year was tough on them,” he said. “But like everyone says, you go through the highs and lows together. … It makes for a tight group. Obviously, they’ve been through it together. Obviously, we have some new faces this year.”

Even though Mittelstadt played six late-season games – he said the two weeks helped teach him the pro hockey life – the youngster would be considered a new face. His presence offers the NHL’s lowest-scoring team some much-needed offense.

Remember, Mittelstadt compiled one goal and five points with the Sabres, numbers they hope are a harbinger for the upcoming season.

For months, it was assumed Mittelstadt would be the Sabres’ No. 3 center behind Eichel and Ryan O’Reilly. That spot could alleviate some pressure and allow him to ease into the NHL.

Then the Sabres traded the minute-munching O’Reilly to the St. Louis Blues on July 1. Suddenly, Mittelstadt, more than four months before his 20th birthday, became the No. 2 center.

“I guess I try not to think about it too much,” Mittelstadt said of his potential role. “It’s go out and play hockey and wherever they put me they put me.”

The Sabres could also put Mittelstadt in the minors. While that seems unlikely, it’s an option. The rookie understands that, so he’s not taking a roster spot for granted.

“I still think I’ve got a lot to prove,” Mittelstadt said.