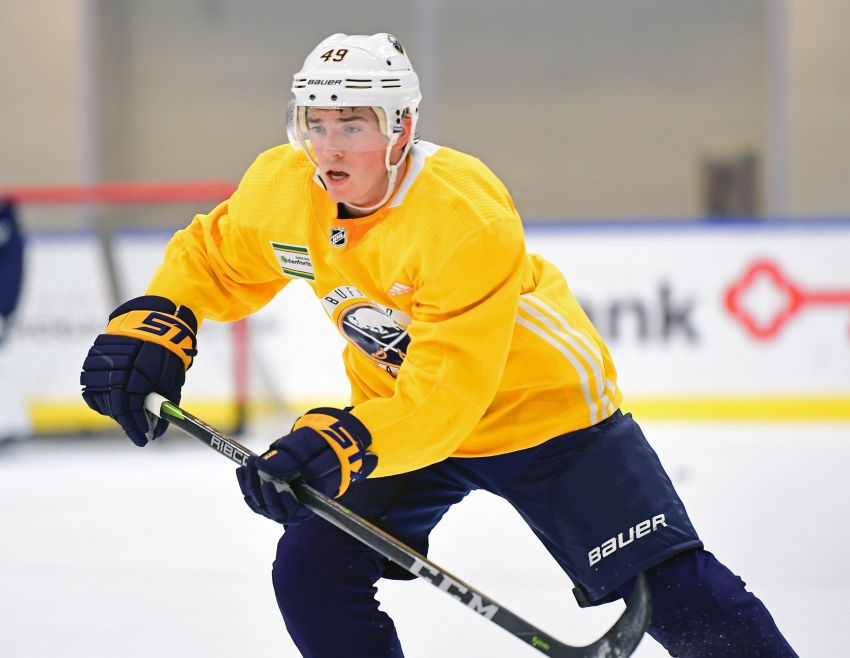 BUFFALO – In late March, after C.J. Smith quickly left UMass Lowell to join the Sabres, the NCAA free agent hardly found a moment to enjoy his brief taste of the NHL.

Smith signed an entry-level contract just days after his junior season ended. He stayed enrolled in school, so classwork was still a part of his daily routine. Following his first NHL practice, the finance major left to take a test online.

“It was hectic,” Smith said Saturday after scoring the game-winning goal and recording three points in a wild 7-4 win in the Prospects Challenge. “I didn’t really get much time to soak it in and enjoy it, and now this summer I was really able to appreciate it once school ended. Once I got to go home, see my family, see my friends, I kind of realized how cool the experience was.”

Smith, 22, played two late-season games before returning to school. After the semester ended, the winger spent the summer in Buffalo training and developing an appreciation for the area.

The Des Moines, Iowa, native picked the Sabres, in part, because the city and team reminded him of his blue-collar roots.

“It was awesome,” Smith said of staying in Buffalo. “I really hadn’t been here before. Obviously, as you could see tonight, the crowd loves hockey and they love their Sabres.”

He was referring to Saturday’s entertaining victory against the Boston Bruins, an unusually intense rookie camp tilt. As the Sabres piled up goals and a slew of scrums erupted late, the HarborCenter crowd roared in approval.

The 5-foot-11, 185-pound Smith scored the power-play winner in the third period, his fourth point in two games. As an older player with NHL experience, the Sabres probably expect Smith to stand out against rosters filled with teenagers.

“Sometimes I’m not the flashiest guy out there, but I have good details, good habits,” said Smith, whose Sabres close the tournament tonight against the Pittsburgh Penguins.

That style helped Smith compile 23 goals and 51 points in 41 contests as a junior last season. Those gaudy numbers caught the Sabres’ attention, and they signed him to a two-year deal March 29.

Smith said in March former general manger Tim Murray was a “heavy influence” in his decision to pick the Sabres. The Sabres fired Murray and coach Dan Bylsma on April 20.

“We get a completely different management, coaching staff, so you’re not really sure because they weren’t the staff that brought you in, so it’s like, ‘I don’t know where I’m going to be,’” Smith said. “But (I) just worry about myself. … There was a reason I was able to sign with the Sabres in the first place.”

“(The) coaching staff’s awesome,” Smith said. “I was here most of the summer. They’re all real friendly and I really appreciate all of them, they helped me out along the way.”

Like a lot of college free agents, Smith will likely start the season with the AHL Rochester Americans. He will still be busy with school, too. He’s taking three finance courses online this semester.