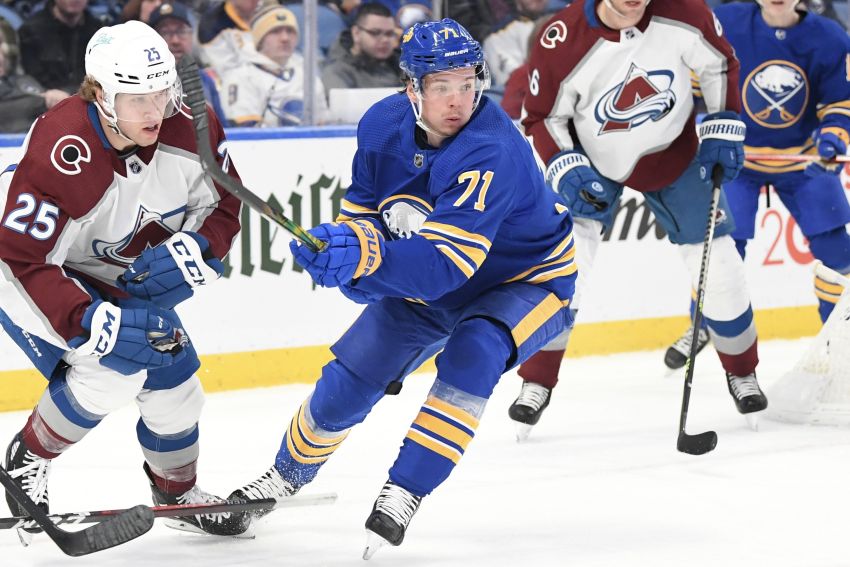 BUFFALO – Sabres defenseman Rasmus Dahlin performed so well during his rehab skate this morning he left the ice early and joined his teammates for practice.

Now, will Dahlin, who missed Sunday’s 7-3 loss to the Columbus Blue Jackets with a lower-body injury, be able to play in Wednesday’s road game against the Montreal Canadiens?

“They’re worried about strength in the area of the injury and potential vulnerability due to any of lack of strength,” Sabres coach Don Granato said inside KeyBank Center. “So testing that out today, it looked like he felt and had his strength and obviously he wasn’t wincing, so it looked like there was no more pain or less pain in that area, the area of aggravation.

“I’m expecting a good report when I hear from the medical team after his practice.”

Dahlin, the Sabres’ top defenseman, doesn’t know when the injury occurred in Saturday afternoon’s 5-3 loss to the Colorado Avalanche. Late in the game, Jack Johnson knocked him down as they chased a loose puck behind the net.

“It’s a little bit of everything,” Dahlin said of his injury. “I didn’t feel it right away, it slowly came after the game. I’m not sure exactly what situation, but it was a physical game and a lot of stuff happened out there.”

In other news, Granato said winger Victor Olofsson missed today’s practice with a non-COVID illness and won’t accompany the Sabres to Montreal, where they continue their five-game road trip.

With Olofsson out, the Sabres this afternoon recalled Brandon Biro, 23, from the Rochester Americans. Check back later for more on Biro, who has compiled nine goals and 36 points in 39 games this season.

Biro has never played in the NHL.

“He’s got a real good feel for the game, a knowledge for the game,” Granato said. “I’m excited when we do see him, whether that’s tomorrow night or not.”

Meanwhile, defenseman Will Butcher, out the last eight games with a lower-body injury, practiced again today.