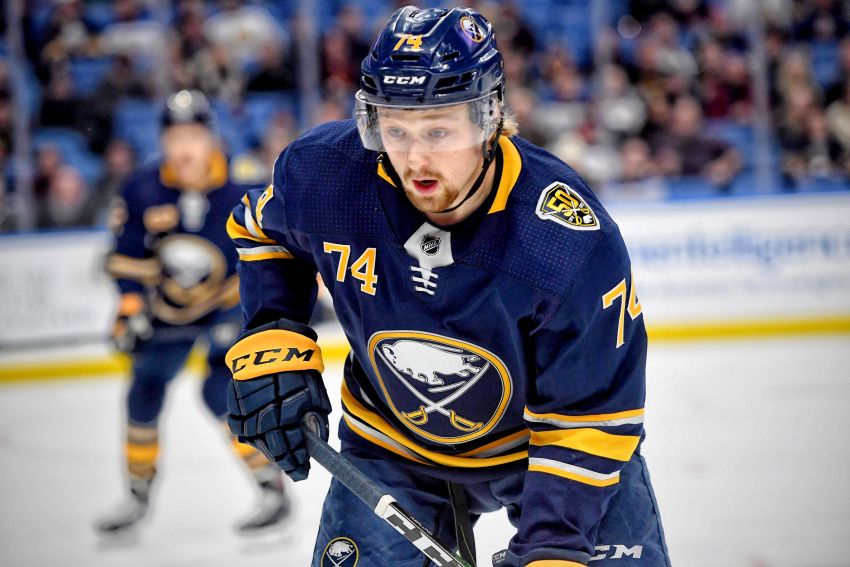 BUFFALO – In the second period Wednesday, Sabres rookie Rasmus Asplund grabbed a loose puck in the right corner, spun off a defender in the circle and quickly cut to the net.

Calgary Flames defenseman Rasmus Andersson hectored the 5-foot-11, 190-pound Asplund in the slot, but he fended him off before creating a prime scoring chance goalie David Rittich stymied.

Asplund’s seventh NHL game, a 3-2 overtime loss, was perhaps his best performance since the Sabres recalled him Nov. 15.

Despite playing on the fourth line and killing penalties – the Swedish forward skated under nine minutes – he was noticeable all night.

If Asplund keeps roaring to the net with authority, he could score his first goal soon.

“They called me up for a reason and they thought I was ready, and that’s what it feels like,” Asplund said following Thursday’s practice inside KeyBank Center, where the Sabres begin a home-and-home set this afternoon against the Toronto Maple Leafs.

Asplund, who turns 22 on Tuesday, has played 88 AHL games over the last two seasons, establishing himself as one of the Sabres’ top prospects with the Rochester Americans.

But Asplund started his pro career at just 16 in 2014-15, when he joined Farjestads BK Karlstad, a Swedish Hockey League team.

That helps explain Asplund’s maturity. This is already his sixth season competing against men.

“You can just see how he’s got the smarts of having played in the Elite League in Sweden and understanding the man’s game that he had to play as a young kid already and adjusting it now to the North American surface,” Sabres coach Ralph Krueger said.

He added: “Very, very exciting, the future with Rasmus.”

Asplund could have an opportunity to earn a permanent job. While his ice time has dipped, the Sabres still have four injured forwards.

Asplund’s versatility – he usually plays center – could help him stay put. On Wednesday, Krueger shifted him to left wing beside center Jean-Sebastien Dea and Zemgus Girgensons.

Krueger said he wanted Dea, who was summoned Monday, to take faceoffs. Asplund has won only 38.5% of his draws.

“We also want to see Rasmus on the wing as a potential move up the lineup,” he said. “I think he’s shown quick progression here in a lot of different facets. We liked his game (Wednesday). Everybody knows we like to have six forwards who are centermen in our lineup, if possible. Rasmus is showing that ability right now.”

Krueger said Asplund’s play this month has confirmed the potential they saw in him during his strong training camp.

“He’s so mature on the ice – both with and without the puck,” Sabres center Marcus Johansson said. “He’s very smart. I think as everyone can see he can play big minutes and he’s responsible and smart and strong. He’s got all the stuff.”

Earlier this week, Asplund moved the belongings he brought with him from Rochester to winger Victor Olofsson’s place. The two Swedes became close friends last season with the Amerks.

When Asplund arrived in Buffalo earlier this month, he spent a few days at Johansson’s house.

“It makes it easier for him, maybe helps him feel like he’s welcome and comfortable and all that,” said Johansson, who has skated with Asplund the last two summers in Sweden. “He’s a great kid.”

Firing Mike Babcock on Nov. 20 quickly ignited the Leafs, who are 3-0 under new coach Sheldon Keefe.

They finished the Babcock era on a six-game losing streak.

Toronto torched the Red Wings 6-0 on Wednesday in Detroit, outshooting them 54-25.

In the Leafs’ three wins under Keefe, who was promoted from the Toronto Marlies, their AHL affiliate, they’ve outscored their opponents 14-4.

“Every D-man’s involved, they attack in a group of five,” said Krueger, who has never coached against the Leafs with the Sabres.

Krueger said the weekend set against their fiercest rival has “been highlighted on the calendar for a while.”

“You can feel the energy in the group,” he said.

Krueger expects the rivalry will create an emotional atmosphere.

“We know it’ll be a mix of people from Canada and Buffalo supporting both sides, which will create a bit of an atmosphere like I’m used to often in Europe, when there’s lots of road fans,” he said. “It’ll certainly give a spark to the game.”

One spark from the past, however, will be missing.

Toronto traded center Nazem Kadri, who had some memorable battles with Sabres defenseman Rasmus Ristolainen, to the Colorado Avalanche on July 1.

“They all look the same – same sweater, same helmet,” he said. “So they’re all enemies.”

The Leafs have won five straight meetings. The Sabres last defeated them on March 26, 2018, a 3-2 win in Toronto.

could have 2-3 clips of good/hard work from rasmus aspund. #Sabres50 #Flames love the drive to the net pic.twitter.com/dbK4mkZ6NJ