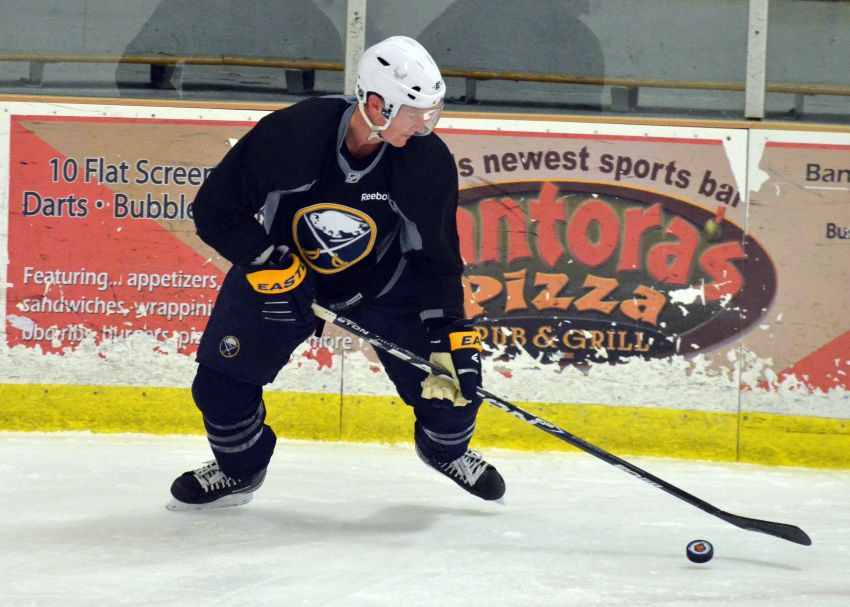 AMHERST – What the heck happens now? NHL labor talks finally appeared to be turning a corner last week, with a string of “secret” marathon negotiating sessions raising optimism a deal could be struck in the near future.

Both sides remained tight-lipped. They plowed through session and after session.

Then the collective bargaining agreement talks crumbled again. Sniping between the NHL and the Players’ Association has resumed.

“I think last week with us talking brought some optimism back,” Buffalo Sabres defenseman Jordan Leopold, the team’s union representative, said Tuesday after skating inside the Northtown Center. “Now the situation we’re in, we seem to be in that stage where we were a month ago. It’ll work itself out. Things work that way for a reason.”

No new meetings are scheduled as the lockout hits the 60-day mark today.

At a sports management conference Monday in Toronto, NHLPA special counsel Steve Fehr told reporters the sides are “fairly close” to a revenue-sharing agreement once there’s a breakthrough in negotiations.

Meanwhile, in an email to the Philadelphia Inquirer on Tuesday, NHL deputy commissioner Bill Daly said the sides are “very far apart.”

“The consensus is we’ve come a long way, tried to move in their direction to get a deal done,” Leopold said. “The chastity belt’s on. They make it seem like it’s not coming off.”

Right now, players feel they’ve already given up enough during negotiations, Sabres captain Jason Pominville said. Nothing in the league’s proposals to the NHLPA benefits the players, he believes.

Pominville doesn’t expect more movement from the union “because we feel like we’ve given as much as we could.” He agrees with Penguins superstar Sidney Crosby, who on Monday told the Pittsburgh Tribune-Review, “It’s pretty one-sided. What have they given up?”

“I think that’s the same way everyone feels,” Pominville said. “Hopefully, his voice his heard. … It is tough. We’ve given up a lot. Everything we’ve done we’ve conceded. They keep wanting more and more. It’s not a give-and-take anymore. It’s only a take. There’s only so much they can take from us.”

Leopold thinks the break in negotiations could be beneficial.

“I think things get heated at a certain period of time,” he said. “As many of us have kids, you get heated at your kids. You need a timeout. You get back in the room and everything’s fine.

“It’s all relative in the game of life, too. It’s all about people skills as much as it is dollar and cents.”

Leopold and Pominville both strongly disagree that NHLPA executive director Don Fehr is communicating poorly with his players, an allegation some on the NHL side made last week after an internal union memo was leaked.

“I totally disagree with that,” Leopold said. “I’ve been on all the conference calls, and everything’s there. The other thing is, Don’s point, we have players in the room. There’s nothing that’s hidden in our conference calls because players talk and let us know what’s going on. …

“If anything, it could be the other way around where they only have a select three, four, five owners in the room, and who knows if the message gets passed to the rest of them? That’s the way they negotiate.”

Despite the negative news, Leopold and Pominville still think a new CBA can be reached to save the season. So far, games are canceled through November.

“Obviously, there’s probably no chance we’ll play 82 games,” Pominville said. “But I think we’ll have a chance to play quite a few games if they settle it. At the same time, there’s got to be something done and there’s got to be moves on both parts. It’s got to come soon if we want to play a lot of games.”