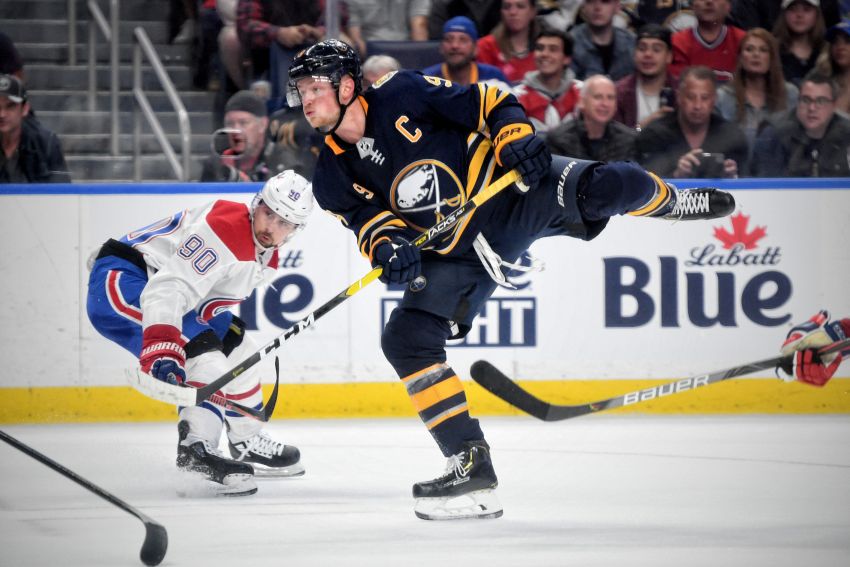 Buffalo Sabres coach Ralph Krueger prefaced his update on the statuses of captain Jack Eichel and goalie Linus Ullmark with four words to alleviate any concern.

“All is under control,” Krueger said on a Zoom call Friday after both players missed the first session of training camp inside KeyBank Center.

Shortly before the Sabres’ first practice in almost 10 months, they announced Eichel, their MVP, would be sidelined Friday. The center suffered an upper-body injury during an off-ice workout and is day-to-day.

Meanwhile, Ullmark, the No. 1 goalie last season, was quarantining because of an immigration issue. He recently returned to Buffalo from Sweden.

“(Eichel) will be fine,” Krueger said. “We are being just cautious in the process, but we expect Jack here in the next couple of days. The same with Linus. He’s had a tremendous preparation. There was a stall in the immigration process, but he’s in Buffalo and we need to follow the proper processes.

“It’s part of the advantage of having a few days extra.”

The NHL allowed the Sabres and the six other teams that missed the playoffs last season to open camp X days early. The Sabres haven’t played a game since March 9.

“We expected possible complications, which we had there, but everybody is in a good space and we’re interacting with them and we are communicating with them as we are with anybody,” Krueger said. “No need for a panic for sure.”

Krueger said the switch won’t be an issue for Olofsson.

“The interchanging that will be possible with Taylor Hall will put them both in one-timer scoring positions,” he said. “A couple times today Olli nailed a few under the crossbar.”

Krueger has put the 26 players who might make the Sabres or fight for a spot on the new taxi squad into the gold practice group. The blue group, meanwhile, is comprised of 12 players likely ticketed for the Rochester Americans.

“We made the decision to go with a team-like feeling right off the hop,” Krueger said. “We don’t have time to play with potential pairs and lines. Let’s start looking at day one as let’s get ready to play right now. We will break the groups up for the intrasquad game on the fourth and have more equal matchups, but this is the way we’re starting and after the first practice I’m feeling comfortable.”

After a marathon long layoff, Krueger said he had “flat” expectations for the Friday’s practice.

“I wasn’t sure how the group would be, but the professionalism and the level of execution in some of the drills, especially the second half, I ran them longer than expected because the pace stayed at a high level,” he said. “(I’m) really, really excited. …

“I believe if somebody walked in off the street they wouldn’t have known many of those players haven’t had a team practice in 10 months. I think that’s a compliment to the group today.”

The Sabres have transformed one end zone in KeyBank Center into large meeting area where the team can gather and be socially distant.

Hall, who played for Krueger in 2012-13 and wanted to join him in Buffalo, said he recognized some of the practice drills.

“I didn’t quite remember how to do them, they weren’t second nature to me, but a lot of the philosophies are the exact same,” Hall said. “Our meetings are fast, our meetings are to the point, and that’s how practices are as well. They’re filled with pace, they’re filled with quickness and high quality. I think that’s a great trait that you want to have in a coach, especially a coach when you’re on a new team.”