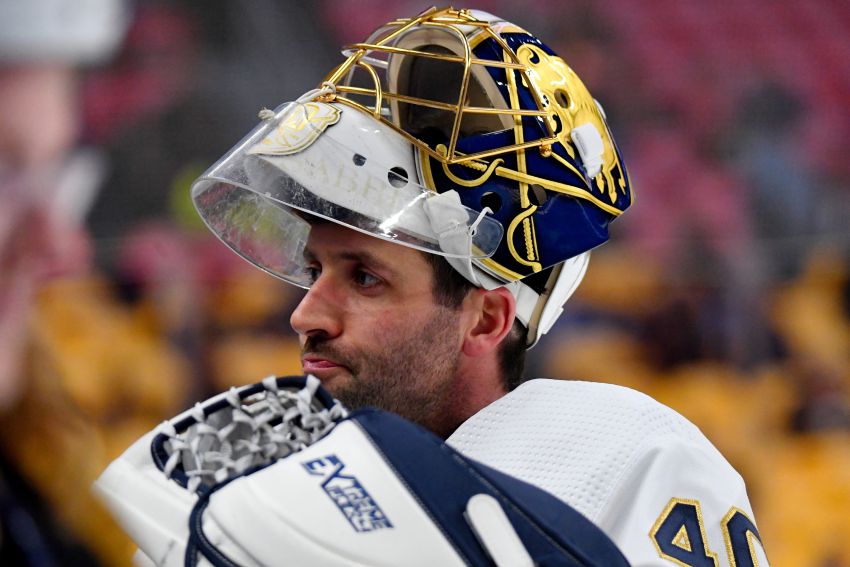 “That makes him really unique,” Krueger said. “Like, even on a game day, he’s always there still giving to the team and supporting, whereas often goalies will check out. … But he’s exactly the same guy. Like, you don’t notice a change at all.”

So for the last month, as Hutton has been relegated to backup duty and endured perhaps the roughest stretch of his career, he hasn’t sulked.

Hutton, who has started just three of the last 15 games, has offered whatever help he can to new No. 1 goalie Linus Ullmark, his former understudy.

“I have a lot of respect for how he presents himself and how he carries himself every day,” said Ullmark, who made his 20th appearance this season Tuesday, a 5-3 loss to the Maple Leafs at Scotiabank Arena. “On the bench and just being a support is huge for me.”

Not surprisingly, the loquacious Ullmark said he likes to chat during games.

For example, in Saturday afternoon’s 3-2 overtime loss to the New York Islanders, Ullmark skated over to Hutton during a break and listened intently as he gave him advice.

“Sometimes I can get a little unfocused or focused on the wrong things,” Ullmark said. “He helps me kind of return to the right state of mind, return to the present. It’s just nice to have someone there that’s been in the game a long time that just knows what I’m going through right now and can help me out.”

Hutton, who turns 34 on Thursday, has imploded after starting the season 6-0-0. Since earning his last victory Oct. 22, he has compiled a wretched 0-5-4 mark with a 3.99 goals-against average and an .875 save percentage.

With Ullmark thriving – he began Tuesday 6-1-2 in his last nine starts – Hutton might only play when the Sabres have back-to-back games.

“For me, at the end of the day, obviously I want to play, I want to compete, I want to do whatever I can,” Hutton said. “And I can, but I can do that by being a good teammate and supporting him and helping out.”

Hutton said Ullmark is “kind of like a sponge right now, trying to learn as much as he can.”

“My experience, I’ve been around for a long time, I’ve seen a lot of different situations, played a lot of different teams and been part of it, whether I was just playing or backing up,” he said. “I’ve backed up a lot of games in this league and just pro. …

“The ultimate goal is the team goal. There’s always those individual needs and goals and things that fit into a team. But at the end of the day, the more success he has and myself personally, the better we can both do, the better it is for the whole goal of the team.”

Krueger has been adamant Hutton, who played a career-high 50 games last season, will receive another opportunity.

“His number will definitely come up here again,” he said. “We’re pretty

The Sabres used 12 forwards and six defensemen Tuesday. With a surfeit of defensemen, they’ve often dressed an extra one and only 11 forwards during the past month.

The Sabres scratched defenseman Zach Bogosian for the third straight game. Defenseman Colin Miller, meanwhile, sat out for the ninth time in 18 contests.