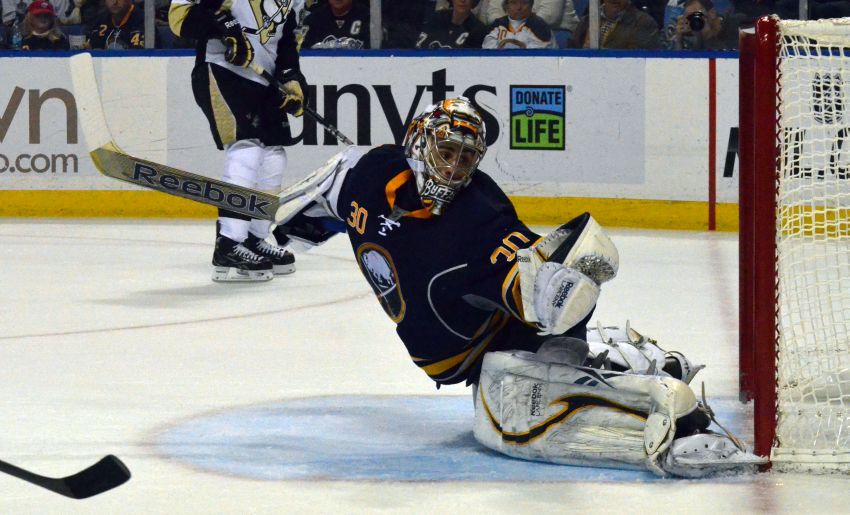 Ryan Miller makes a lunging save off the stick of James Neal (not pictured) during the third period Sunday. ©2013, Dan Hickling, Olean Times Herald

BUFFALO – Ten minutes after the Sabres’ disappointing 4-3 loss to the Pittsburgh Penguins on Sunday afternoon, a seething Ryan Miller stomped into the dressing room, crossed his arms and faced a throng of reporters and cameras.

The Sabres had just a blown 3-2 third-period lead after falling behind 2-0 only 87 seconds into the tilt.

Miller’s lip quivered as he cursed, sighed and vented his frustrations following the Sabres’ sixth loss in nine games.

“It’s just a (lousy) way to lose,” the goalie said inside the First Niagara Center. “I don’t understand. Your guard has to be up at all times. They get right back in the game, one broken play to seal it for them. (It’s) just preventable and not what we need to be doing right now.”

Downing the Eastern Conference power would’ve been a statement win.

But Pascal Dupuis tied it less than two minutes after Steve Ott put the Sabres up 5:17 into the third period, capitalizing on sloppy Sabres play. Paul Martin scored the winner at 17:56, blasting a one-timer from the point as Christian Ehrhoff screened Miller.

Which goal was bugging Miller the most?

Still, some players found positives from the Sabres’ ninth regulation defeat. Ott liked the determination and heart that brought the Sabres back.

“I don’t care (about) all the naysayers and everybody’s looking for excuses and disappointment,” Ott said. “It’s easy to look for negativity. Negativity gets thrown out the window in a game like this. Obviously, we’re disappointed we didn’t win or collect points.

“But you know what? To show the character … of this group to continue to battle back, save face in this organization and give us a chance to win tonight, that’s what it’s all about.”

Ehrhoff, who played 24:18 and had two assists, wasn’t taking much solace from the loss.

“In the end, we still got zero points,” the defenseman said. “That’s what matters. We played a lot better against a very good hockey team and a lot of positive things we have moving forward. But still, today (I’m) frustrated. There was definitely more in that game for us.”

Early on, it appeared the Penguins might run the Sabres out of their own building before a national television audience on NBC for “Hockey Day in America.”

Dupuis tipped in a shot 35 seconds into the contest after Cody Hodgson coughed up the puck behind the net. Superstar Sidney Crosby followed on the power play at 1:27.

The Sabres, meanwhile, began Sunday one of their last 30 on the power play and zero of the last 12.

Then in the second, a period in which they’ve allowed a whopping 25 goals, the Sabres finally settled down.

“We recovered and we played really well,” Miller said. “It was our best second period we’ve had.”

The Sabres couldn’t seize the momentum before the capacity crowd of 19,070 fans after Ott scored, though.

Dupuis’ one-timer knotted it after Jason Pominville missed a couple of chances to clear the puck.

“We had a real good third period going until that moment,” Sabres coach Lindy Ruff said. “(Their) chances were way down. Our chances were way up. We were putting some heat on them. We didn’t take advantage.”

But the Sabres could’ve put the Penguins away. Chris Kunitz retaliated and slashed Ott following a hit, giving the Sabres’ awful power play a chance to win the game.

“When the game was on the line, our power play didn’t get it done,” said Pominville, who’s pointless in the last six games.

Hodgson added: “It’s tough, especially because we did have this game. I thought when we were up one I thought we could really take it to them. We had lots of momentum.”

Martin scored with the Sabres running around their own zone again.

“We had the power play right before that with two or three opportunities that we didn’t put away,” Ruff said. “And if you don’t capitalize, you don’t really have that opportunity to seize the moment, and we didn’t.”

Miller added: “You’re either competent enough or experienced enough with the lead in the third period. It burned us. It’s not acceptable.”