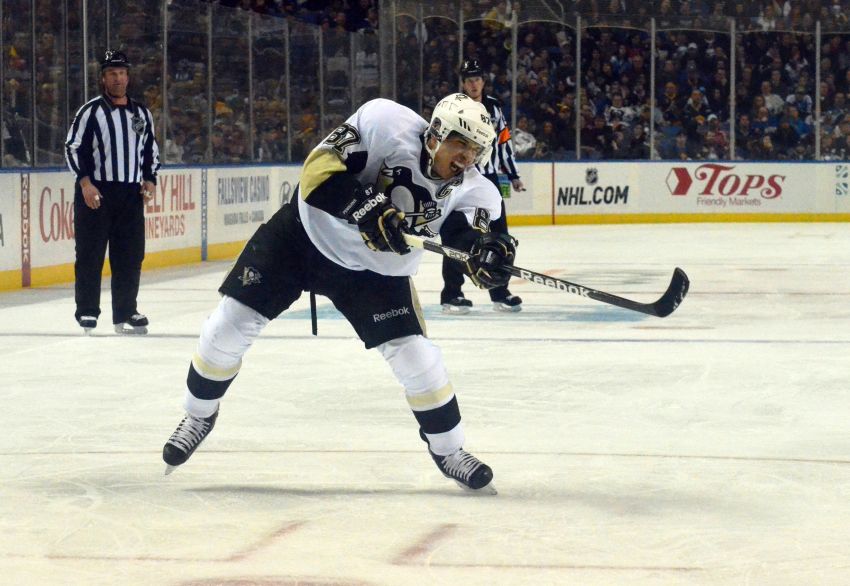 BUFFALO – No one can quite explain Sidney Crosby’s success against the Sabres. Chalk it up to the 25-year-old being hockey’s most talented superstar. Chalk it up to a bit of luck, too.

Whatever the case, the Pittsburgh Penguins center owns the Sabres.

Crosby registered a goal and three points in Sunday afternoon’s 4-3 win inside the First Niagara Center, extending his point streak against the Sabres to 14 games, a span in which he’s compiled eight goals and 23 points.

“I don’t know if I want to talk about it,” Crosby joked while knocking on the wooden dressing bench. “It’s been good. For whatever reason, I’ve been able to put some points up. It’s great ice here. That’s all I can say.”

Crosby scored on the power play 1:27 into the game, knocking a shot that bounced off the end boards past Sabres goalie Ryan Miller after Mike Weber couldn’t coral the puck.

Crosby also had the secondary assist on Pascal Dupuis’ late tying score and the primary helper on Paul Martin’s game-winning goal 17:56 into the third period, a pass he said was poked off his stick.

“He’s around the puck, he’s hard on the puck,” Ruff said. “I think we’ve seen him score a couple where they bounce off the end wall and he’s right there. He’s got a knack for being in the right place combined with an incredible work ethic.”

Crosby has seven goals and 24 points in 16 games this season.

Notes: The teams scored on three of the game’s first four shots Sunday, the first time that’s happened in the NHL since the Sabres’ 4-3 loss on March 16, 2010 in Atlanta, according to the Elias Sports Bureau. … The Sabres are 2-9 in their last 11 games against Pittsburgh. … Sabres captain Jason Pominville took two minor penalties Sunday, one more than he had in the previous 22 games. … Sabres winger Steve Ott had five hits against the Penguins, giving him a league-best 64. … Ruff turned 53 years old Sunday.