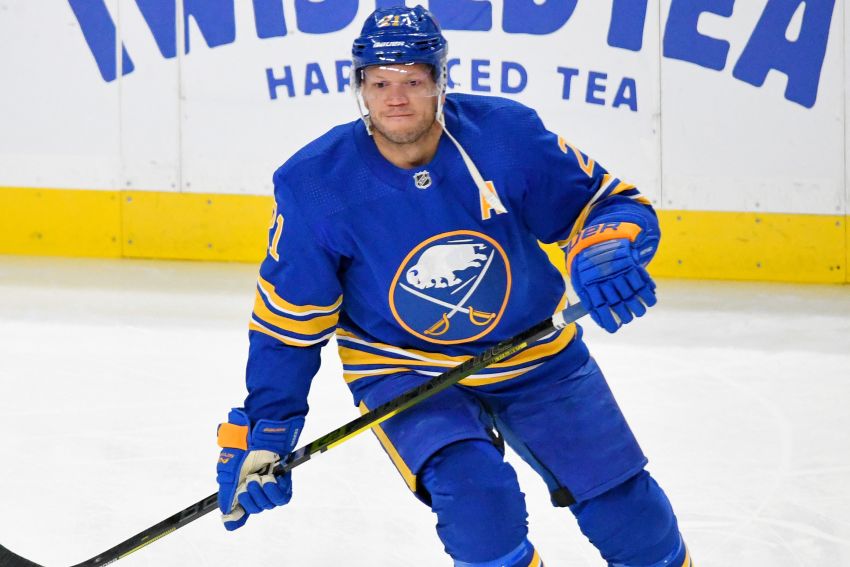 Given his scary history battling concussions, Sabres winger Kyle Okposo thought the worst after teammate Matt Irwin’s shoot-in hit him in the head April 15 in Washington.

Okposo, 33, suffered four concussions over his first four years in Buffalo, including one late in the 2016-17 season that left him hospitalized in intensive care.

“That was obviously a worry when I got hit in the face, you know, like, ‘Oh jeez, I got another concussion,’” Okposo said on an end-of-season Zoom call Monday. “It’s kind of crazy, you don’t know how many is enough.”

Luckily for Okposo, who skated off the ice bleeding that night, he said his “head is all good.” But the errant puck broke his cheekbone, ending his season 13 games early.

Okposo, the Sabres’ oldest forward, endured an injury-riddled campaign, playing only 35 of the team’s 56 games.

Following the 10-month layoff for COVID-19, a lower-body injury sidelined him the first five games. He also dealt with an undisclosed ailment early in the season.

Everything contributed to the slowest start of Okposo’s 13-year career. He looked invisible.

The American mustered just one shot on goal in his first six games. He recorded only one point, an assist, in his first 18 outings. He finally scored his first goal March 18, his 24th appearance.

After a neck problem shelved him three games, Okposo quickly found a groove under Granato, registering one goal and eight points over the next nine contests. Granato rewarded a more active Okposo by giving him more ice time.

“When I came back from my neck injury … that really kind of lit the fire under me again,” he said. “I felt like I played well and was just playing free, which was great.”

The Sabres, of course, imploded under former coach Ralph Krueger. But they settled down under Granato, often performing as a cohesive unit while showcasing a faster, more aggressive style.

“It just felt like we were playing hockey, like playing good hockey,” said Okposo, who compiled two goals and 13 points this season. “Everybody’s making five-, 10-foot plays, everybody’s supporting each other, and when you do that, when you make a little 10-foot pass on somebody’s tape, you feel good, and that snowballed.

“It was like, ‘OK, 10-foot pass here, 10-foot pass there,’ and then all of a sudden, everybody’s got confidence and … that leads to more offensive chances.”

Okposo has two seasons remaining on his seven-year, $42 million contract. When he signed that huge deal, he envisioned the Sabres would become Stanley Cup contenders. Instead, their playoff drought has reached an NHL record-tying 10 seasons.

They finished dead last this year and endured an embarrassing 18-game winless skid.

Still, Okposo feels optimistic about the future. He doesn’t believe the gap between the Sabres and some of the Eastern Conference heavyweights is very big.

“We’re a long way from being a mature team but the way that we played down the stretch, that cohesiveness that we had, would minimize that gap and allow us to close it quicker and become a more mature team quicker than we would have if we didn’t have that cohesiveness,” he said. “We’ve got a lot of young guys, we’ve got a lot of maturing to do, but I thought that the end of the year showed us that we have some great bones to our team.”