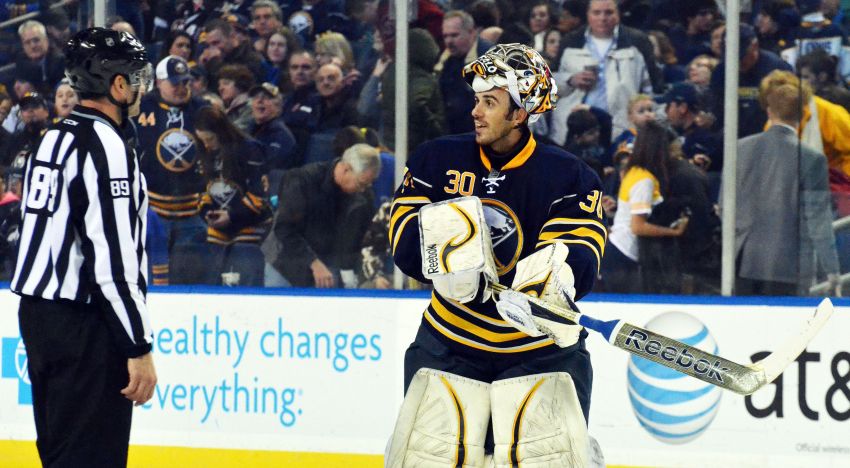 BUFFALO – It was ugly. Testy fans kept booing the Sabres as they trudged toward a sluggish, uninspired 2-1 loss to the Winnipeg Jets on Tuesday. They moaned early and often as the Sabres ran around their own zone.

As the final horn signaled the Sabres’ second straight loss and fourth in five games, what remained of the capacity crowd of 19,070 booed them off the ice one more time.

Clearly, the Sabres’ rabid fan base hates the current team.

It might’ve been the surliest crowd in the 17-year history of the First Niagara Center, a belief goalie Ryan Miller disputed.

“I remember a time,” Miller said following a 15-minute, players-only meeting. “I remember my rookie year.”

These days, the Sabres have a $65 million payroll, a dedicated owner in Terry Pegula and play to a full house nearly every night.

Too bad the players can’t match the passion exhibited elsewhere.

“Something needs to get shaken up with our attitude more than anything. I don’t know what kind of change it is.”

Sabres defenseman Robyn Regehr added: “It was a terrible game by us. What we were missing is the effort by everyone. I think the fans recognized that and they voiced their displeasure. We need to address and I think we have now. We have to get going.”

“We need to take a hard look at everything is what we have to do,” Ruff said. “We really do.”

When the Sabres fell to Pittsburgh 4-3 on Sunday, they rallied from an early 2-0 deficit to grab a late lead. They took some solace in their effort.

The Sabres can’t find any silver lining in Tuesday’s ugly, disjointed mess, however. They lost to a weak Jets team that had just dropped three straight contests at home.

“No there isn’t,” Ruff said. “I’m not going to stand here and make excuses for it, either.”

Fresh off Sunday and Friday’s nice 4-2 win against Boston, Ruff couldn’t explain the Sabres’ meager effort against the Jets, which started ominously when Bryan Little scored at the 60-second mark.

“I have a hard time explaining that except that (Monday’s) day off and preparation we went through this morning trying to get ready to play wasn’t good enough,” Ruff said.

“We got talent. We just have to play hard,” Miller said. “That’s between the ears. I think we want to win. I don’t think there’s anybody that (will) contest that point. We want to win. It’s not good enough right now. I think everybody in the room has to understand how the situation looks. … We need to get moving here.”

Sabres captain Jason Pominville added: “I feel as if we have the talent. … But you can’t only rely on that. You got to bring the effort.”

“It starts with effort, going out there and making sure you’re winning the one-on-one battles with the guy next to you,” the 13-year veteran said. “He’s trying to get the puck, too. You got to make sure you beat him.”

The Sabres, most notably Tyler Myers, got beat early, getting stuck behind the net and leaving Little wide open.

“Tyler overplayed the play,” Ruff said. “It’s a play that’s not acceptable. It’s a tough play. He can get help inside our system. But he overplayed it, got a little anxious.”

The booing got into the players’ heads, too. They wilted.

“Indecision, hesitation – I think they felt the pressure,” Ruff said. “They heard the boos. I told them, ‘Get on your toes. Let’s tighten the gap on then, let’s get more aggressive.’”

The Sabres got going later. Pominville scored on a two-on-one 19:38 into the second period, his first point in seven games.

It started too late, though.

“They didn’t start skating until the third period,” Ruff said.

4 thoughts on “Sabres jeered throughout ugly loss to Jets”