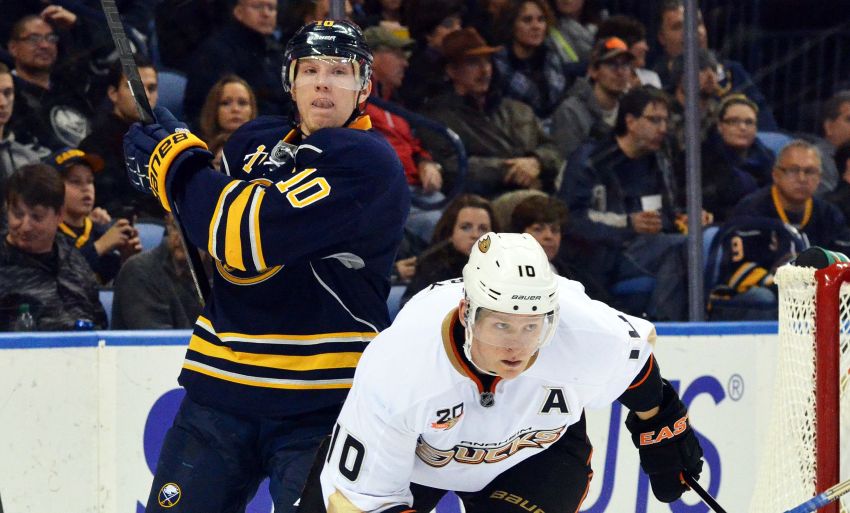 BUFFALO – Fifteen days ago, as the Sabres began clawing back from a three-goal deficit against the Dallas Stars, the atmosphere inside the First Niagara Center shifted dramatically.

For one of the few times this trying season, the building buzzed with positive energy. The same fans who had booed and groaned all month cheered the Sabres’ strong effort.

The players felt the crowd’s support.

“That’s how it should be every game. We got to bring the effort,” defenseman Christian Ehrhoff said Monday after the Sabres, a wretched 0-8-1 at home, prepared for tonight’s tilt here against the Los Angeles Kings. “I think that game we got rewarded by the fans for the effort.”

“They want us to compete, and this is a town where hard work is first and foremost the precedent,” Sabres captain Steve Ott said. “That’s (what) we need to start with. The work ethic usually leads to winning games.”

But there’s been very little to cheer about during the worst home start in franchise history. The Sabres have only held a lead for 12:02 this season inside the FNC.

Another loss and the Sabres would record a home winless streak of 10 or more games for the third time in team history, according to a local statistician.

“We haven’t really put together a full 60-minute effort, and most of the games our starts have been bad,” Ehrhoff said. “We just got to try to get in the game good.”

The Sabres keep creeping back into games late. By then, however, many fans have already started getting restless or chanting “Fire Darcy” for general manager Darcy Regier.

“I think it’s a combination of the whole season,” Ott said about the home woes. “We have to come out playing the right way to win a hockey game. At home, we haven’t, obviously, really done that.”

“I think at times here we’ve tried to maybe try to make better plays for the crowd and play to that, where on the road we really don’t care,” Rolston said. “If it’s a road game and if we make a mess of it, we try to find success any way we can on the road, and that’s going to have to be our mentality on the road.”

Ott said the Sabres have “seen glimpses” of the work ethic they must bring into road games.

“That’s why we’re scared for our lives in that we could be blown out,” he said. “That’s something, if you’re playing the wrong way, things go south in a hurry.”

Things went south quickly early in Friday’s embarrassing 6-2 loss in Anaheim. The Sabres trailed 4-1 following the first period. Still, they opened their three-game California trip well, upsetting the Sharks in an exciting 5-4 shootout last Tuesday before falling 2-0 to the Kings on Thursday.

“In terms of five-on-five play, I thought both those games were a positive in how we wanted to play and the energy level that we wanted to play with,” Rolston said. “A lot of areas of our game are getting better in allowing us to create some more offense.”

Ehrhoff added: “Probably the game in San Jose was the best game we played. We skated for 60 minutes, and that’s what it’s all about. We got to bring that effort every night.”

If they can do that, then perhaps Sabres fans won’t voice their frustrations.

“The expectations have been pretty high these last few years since Terry (Pegula) bought the team,” Ehrhoff said. “Everybody, me included, thought it would go in a different direction. It’s just gone downhill so far.

“I certainly understand the frustration. But we also need the fans’ support to get out of the hole. But it starts with us putting a good effort on the ice.”