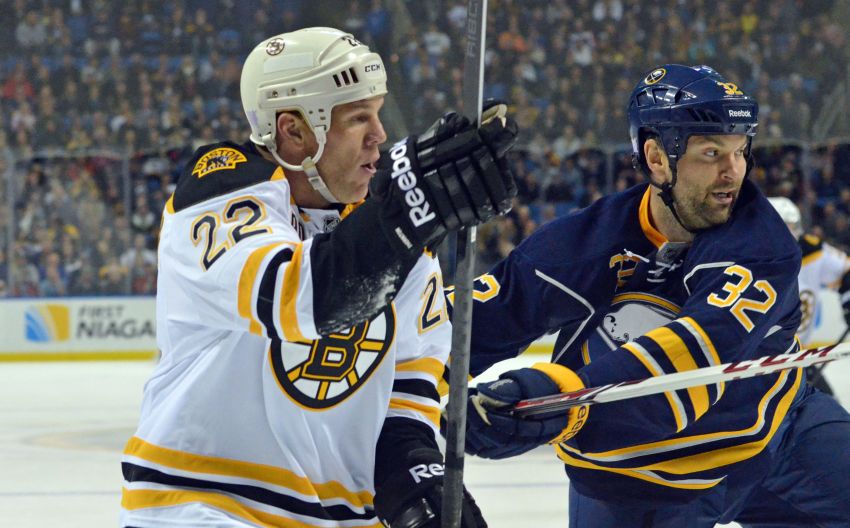 Hey, take it where you can find it, right?

Even after falling behind 2-0 just 40 seconds into the second period, they battled back, slicing the Bruins’ lead to 3-2 after 18-year-rookie Nikita Zadorov scored his first NHL goal, a nifty one at that, late in the period.

Maybe the Sabres, strong finishers this season, could ride the momentum from the defenseman’s goal and roar back for the upset.

The Bruins outscored the Sabres 2-0 and outshot them 13-2 during the third period.

By the end of the Sabres’ 5-2 loss, the remaining fans in the crowd of 17,645 began their “Fire Darcy” chants for general manager Darcy Regier, a new staple this season.

The 1-9-1 Sabres are the first team with 10 losses this season. They’re 0-6-1 at the First Niagara Center, tying their worst-ever home start.

“I think we could’ve done a little more to stay in that third period,” Sabres goalie Ryan Miller said. “I need to come up with some saves for the guys. Two goals aren’t very good. That’s about the most disappointed I’ve been with myself all year. So 3-2 at home, you got to give guys an opportunity, just two goals go through me. That’s not going to get it done.”

More on the game later.

The Sabres couldn’t even escape the third period without controversy.

At the 5:49 mark, John Scott, the Sabres’ hulking 6-foot-8 tough guy, zoomed in after Loui Eriksson had dished the puck at center ice and hit the 6-foot-2 winger in the head with his shoulder.

Officials ejected Scott and gave him a five-minute match penalty, meaning the league will review the hit. A suspension could be coming.

According to TSN, Scott already has an in-person hearing. A date hasn’t been set yet.

According to the Bruins, Eriksson was staying overnight in Buffalo for observation.

Sabres coach Ron Rolston had no comment on the hit.

From his view on the bench, Sabres co-captain Steve Ott said it appeared Scott “went through his body.”

“But I haven’t seen a replay or whatnot,” Ott said. “I couldn’t even tell you.”

Remember, the Sabres are already playing without winger Patrick Kaleta, who has four games left on his 10-game ban for hitting Columbus’ Jack Johnson high.

Before getting tossed, Scott played aggressively during his 5:15 on the ice, looking for hits everywhere.

“Johnny played great for us,” Ott said. “When a guy plays, whatever he plays, 48 minutes or 10 minutes a night, he’s physical, looking for fights to stir up a game. He made some great offensive plays, actually, moving the puck and getting them up to our D, too. Johnny’s game I thought was solid.”

Then Zadorov scored 15:10 into the second period, pinching in from the point and backhanding a shot past Bruins backup goalie Chad Johnson.

“He’s playing well,” Rolston said. “He’s one of our better guys out there.”

Zadorov’s the second-youngest Sabre to score a goal behind Pierre Turgeon in 1987-88.

“There’s no better feeling than watching an enthusiastic kid … getting his first goal,” Ott said.

But Torey Krug scored twice during the final period, killing the any momentum Zadorov’s score had generated.

What happened in the third period? The Bruins’ depth wore the Sabres down.

“They got a strong team over there from their D all the way up to their forwards,” Ott said. “We didn’t match them. Simple as that. They came out and a veteran-based team just took over the game, kind of steamrolled in the third.”