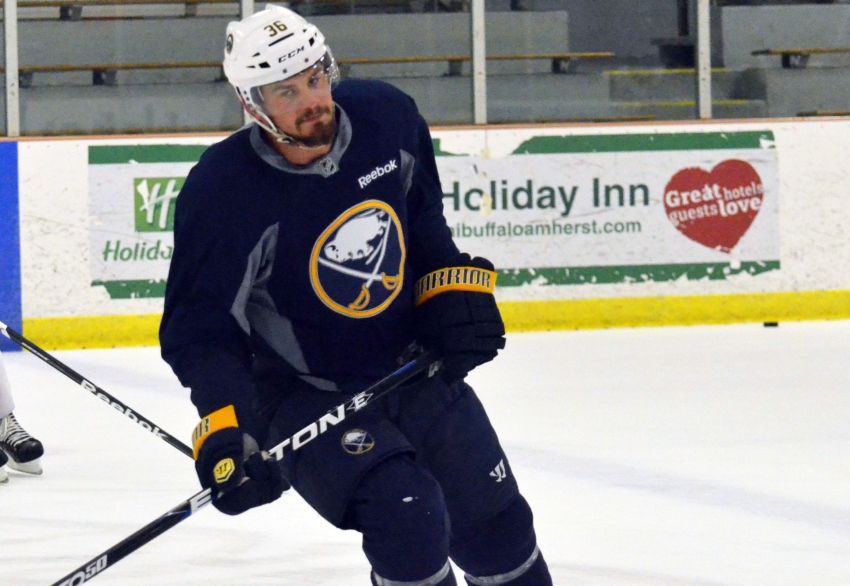 AMHERST – It felt differently, Patrick Kaleta said, nothing like the dozens and dozens of practices the Buffalo Sabres winger had participated in during the 113-day NHL lockout.

On Monday, the day after the NHL and the Players’ Association tentatively reached a new collective bargaining agreement, Kaleta experienced a special feeling as he skated with eight other Sabres inside the Northtown Center.

“It’s just a feeling in my bones, my muscles,” Kaleta said afterwards. “It’s something different. I haven’t really narrowed it down yet. But there’s definitely something going on in my body where it’s like, ‘All right, it’s getting down to crunch time. It’s time to go.’”

Go time’s nearing for Kaleta and all the Sabres, and they couldn’t be happier. A sense of excitement and relief accompanied the long players-only workout.

“I think if you look at our skate today, yeah, I think guys are a little bit more energetic,” said defenseman Jordan Leopold, the Sabres’ union representative. “It’s been an interesting, what, four months now?”

For some, the lockout felt about four years long. But with the CBA ratification only a formality, a short training camp could begin as soon as this weekend. An abbreviated schedule of 48 games or so will start about a week later.

Now that the dispute’s finally nearing the official end, was it all worth it?

“No, it wasn’t worth it,” Sabres winger Thomas Vanek said bluntly. “We could’ve settled with the same deal months ago. But was it necessary? Yeah, because they weren’t willing to negotiate again. That’s the sad part about it, at least from my standpoint. Maybe I’m biased because I’m obviously on the players’ side. But I thought we were willing to negotiate fair.

“You look way back at that first offer, 43 percent (of revenues, down from 57 percent), it’s like, where do we start? That’s where it all started going south early.”

Vanek also said: “I think this whole lockout was stupid. I think it should’ve been settled before the season started. We should’ve played 82 games. But you can’t change the past. You move on.”

As talks hit another stumbling block late last week – the union claimed the league changed some language about hockey-related revenue the sides had already agreed to – Vanek feared the season could still be canceled with a deadline days away.

“(I was) really concerned because the way the meetings went, then at the end what they tried to sneak in on us,” Vanek said. “It just showed no respect again. It was sad. I’m happy they came back and we settled.”

Vanek found out about the deal when his wife woke him up at 5:45 a.m. Sunday.

Leopold, meanwhile, also likes the new CBA. Players “were really keen” on improving a couple of things for themselves, most notably their pension.

“As a professional athlete, we grind this thing out every day,” Leopold said. “Yeah, (it’s) at a younger age. But as you get older things start to creep into your life you don’t really expect. To have a little bit of backing was nice. (NHLPA executive director) Don (Fehr) thought that was really important to get that for us.”

Players also felt it was important to acknowledge hockey’s many frustrated fans, who just endured their third lockout in 18 years and second in eight.

“I’d say 40 percent of my game is from the fans, feeling the energy off of them,” Kaleta said. “I know the fans of Buffalo are the best in the country, whether it’s Bills, whether it’s Sabres.”

Leopold believes “the product will sell itself once” the season starts.

“We got to go out there and give them a good product and win back their hearts,” he said.

“The Buffalo Sabres have always cherished our passionate fans and their unyielding love of hockey,” Black said. “We want to sincerely thank our fans for their patience during this process and their consistent support of our team for the past several months.”

For Kaleta, the Sabres’ chief agitator and most aggressive presence, the last several months have been tough. A couple of friends texted him Sunday and wrote, “You got your therapy sessions back now.”

“I get to go out there and do my thing,” Kaleta said. “I think the overall consensus is that we’re excited to get back to work.”