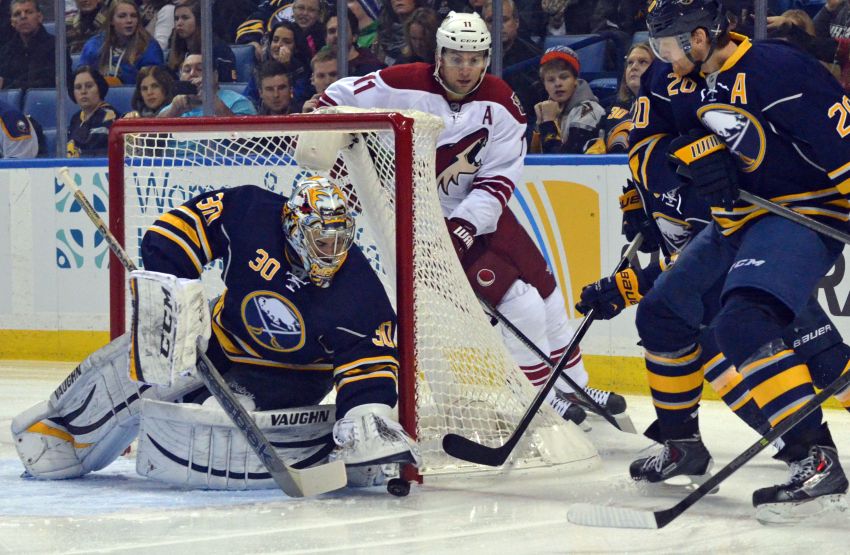 Ryan Miller (30) has been one of the Sabres' lone bright spots this season. ©2014, Dan Hickling, Olean Times Herald

BUFFALO – Ryan Miller knew what most Olympic observers knew. Despite nearly backstopping Team USA to an unlikely gold medal in the 2010 Vancouver Games, the Sabres goalie wasn’t a lock to represent his country again this year.

The 33-year-old has performed inconsistently at times during recent seasons. The Sabres, meanwhile, have become the NHL’s worst team.

“It’s something that I wanted to work hard for and get myself back in the picture,” said Miller, one of three netminders named to Team USA’s entry for the upcoming Sochi Games on Wednesday. “It really did seem like as the season was beginning and in the summertime I was a little bit on the outside looking in, and I wanted to work my way into a position. Things have kind of worked out.”

They sure have. Miller has been the Sabres’ MVP this season, posting strong numbers – a 2.70 goals-against average and .926 save percentage – for the bottom-feeding club.

Miller said he couldn’t do anything other than play and let the roster work itself out.

“That’s all you can really hope for,” Miller said Friday inside the First Niagara Center. “It was something where the American goaltending has come a long way in the last four years, and it’s been building. I think it’s even getting better as we move forward.

“It was really about handling your own business to see how things work out. I’m happy to have the opportunity.”

Detroit’s Jimmy Howard and Los Angeles’ Jonathan Quick are other goalies. Both just returned from injuries. Based on their limited action and Miller’s consistently strong play all season, he’s probably the favorite to start for the United States.

“The work really starts now,” he said. “It’s a month of hockey. You got to earn and you got to travel and play a quick, hard tournament. So the job only gets tougher. So it’s about finding the right way to play and trying to capture that and gain confidence.”