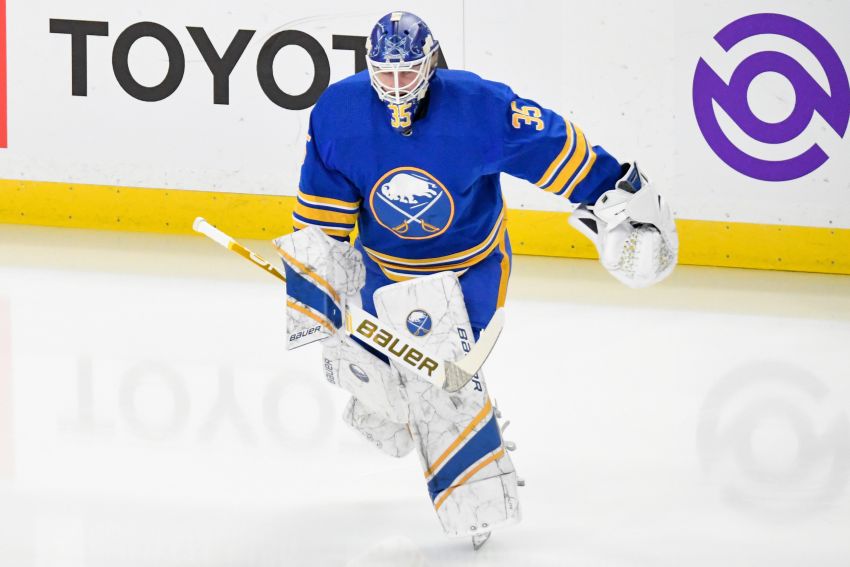 BUFFALO – After a lower-body injury sidelined goalie Linus Ullmark 15 games, he returned in late March and quickly morphed into the Sabres’ backbone again.

Then on April 13 in Boston, Ullmark, in his eighth appearance back, suffered a lower-body ailment stretching to make a save in the opening minutes. At first, he tried to play through the pain.

“When the pain never subsided and it was getting worse and worse, I couldn’t find any strength it my pushes and it was like, ‘OK, let’s shut it down. I’m not going to be able to go out there and compete against Boston and do a good job of doing that,’” Ullmark said on a Zoom call this morning after skating with his teammates.

On Tuesday, Granato said Ullmark wasn’t “in the picture” to return.

“He had a couple skates on his own and wanted to jump in, felt comfortable enough on the medical side with him to jump into the skate today,” Granato said this morning. “So we’re gathering more information on that to see how he responded and felt with regard to the skate today to see if there’s more reason to be optimistic on him in the next few days.”

“It’s the first practice back and it was certainly enjoyable,” said Ullmark, who has missed the last 10 games. “I had fun out there skating around with the boys. And regarding the future, there’s still things that need to be done beforehand but we’ll see.”

Ullmark has performed at a high level all season, compiling a 9-6-3 record with a 2.63 goals-against average and a .917 save percentage in 20 games.

“It certainly was a very frustrating thing to happen, especially when you’ve gone through a bigger one beforehand,” Ullmark said of the injury. “If I can rewind and obviously do something different I would’ve done it, but looking back at it at the time, I did what I had to do to be ready for the game and to play like I normally do. It was kind of a weird thing that just happened.”

The Sabres will make one lineup change against the Islanders, inserting center Cody Eakin for winger Tobias Rieder.

With Eakin back after sitting out seven straight games as a healthy scratch, Riley Sheahan will move from center to left wing on the fourth line.