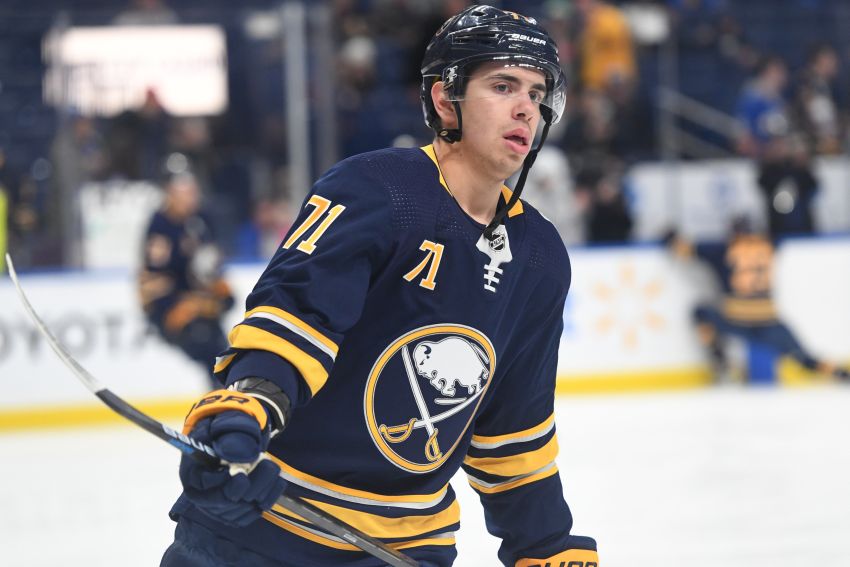 Fresh off a season in which he set career highs and showcased his versatility by playing 11 of the 12 forward positions, Rodrigues was expected to provide offense and play a large role.

Instead, Rodrigues, 26, has struggled from the get-go under new Sabres coach Ralph Krueger, compiling zero goals and just three assists in 24 outings.

Rodrigues started the season as a healthy scratch, sitting out the first three games and beginning a trend. When he has played, he has often skated short minutes.

In recent weeks, Rodrigues’ ice time has often dipped below 10 minutes. On Tuesday, the Sabres benched him for winger Dalton Smith, a tough guy who ended up playing less than two minutes in his NHL debut.

Before the Sabres’ 6-4 loss to the Tampa Bay Lightning, TSN and The Athletic reported Rodrigues has requested a trade.

“I’m a hockey player who wants to play hockey,” Rodrigues said Wednesday inside KeyBank Center when asked if he requested a trade and wants a fresh start. “I think that pretty much anyone out there will tell you the same thing. It’s a job, it’s a career. I just want to play hockey.”

That response, of course, isn’t a denial.

Bogosian, 29, has been scratched seven of the last nine games entering tonight’s home contest against superstar Conor McDavid and the Edmonton Oilers.

Clearly, Krueger doesn’t want to deal with any distractions.

Rodrigues enjoyed his best season in 2018-19, scoring nine goals and 29 points in 74 games. An independent arbitrator awarded him a one-year, $2 million contract in July.

Growth was expected. Rodrigues, who can play up and down the lineup at center and wing, also compiled seven goals and 25 points in 2017-18.

“Yeah, I’m not going to say I’m happy with that,” said Rodrigues, who scored his last goal March 17 and has just one in his past 51 games. “I expect more for myself. Just given those chances and playing, it’ll come. I don’t doubt myself. But, yeah, it’s obviously not the result I wanted.”

So what has happened to the Boston University product this season?

For starters, while the Sabres’ forward depth is still weak, it’s better than past years. The Sabres are also playing a new system under Krueger that forces players to give up some individuality for the group.

“What happens is the competition in the group has been hard,” Krueger said. “Some players will profit from it and some … will struggle. And it’s also the principles and concepts we’re looking for. I told you early on that some players who played a different way they’ll have to give up some of themselves to become part of a group dynamic, which gives us a chance to win every night here if all five guys on the ice are connected, then we have a chance.

“And if we’re not, we won’t, and what would happen is often players will give up or lose on the offensive side. And it’s possible with him that that’s the pathway that’s been difficult for him. And not for everybody does that come as easy.”

“No, hockey’s hockey,” he said. “I think anywhere around the league any guy in this league can play any system. We’ve all been doing this for 20-plus years or close to it. So, yeah, no, the system’s not really an issue.”

Rodrigues has displayed some glimpses of his old self at times in recent weeks. He played one of his best games this season Dec. 23 in Ottawa, skating 13 minutes, 54 seconds in the Sabres’ 3-1 loss to the Senators.

“You always kind of go back to that,” Rodrigues said of his performance that night. “You always believe in yourself and always have that confidence. But a game like that kind of gives you a little boost.

“It’s frustrating for myself to see myself not do that consistently. That’s kind of what I see myself as and what I want to be doing. Just want to be playing and getting those chances.”

Krueger, whose Sabres blew a 4-1 lead to the Lightning and lost their fourth straight game, said Wednesday “the group in there is coming out fighting this morning.”

“The coaches are fighting, the players are fighting, and we’d like to show the crowd here who were unbelievable in my first half of my first season here in Buffalo, we want to give them that as a New Year’s gift tomorrow against Edmonton,” he said. “We want them to see the fight and the reaction. …

“We went big picture to get some sanity out of the pain yesterday.”

The Sabres stayed off the ice Wednesday.