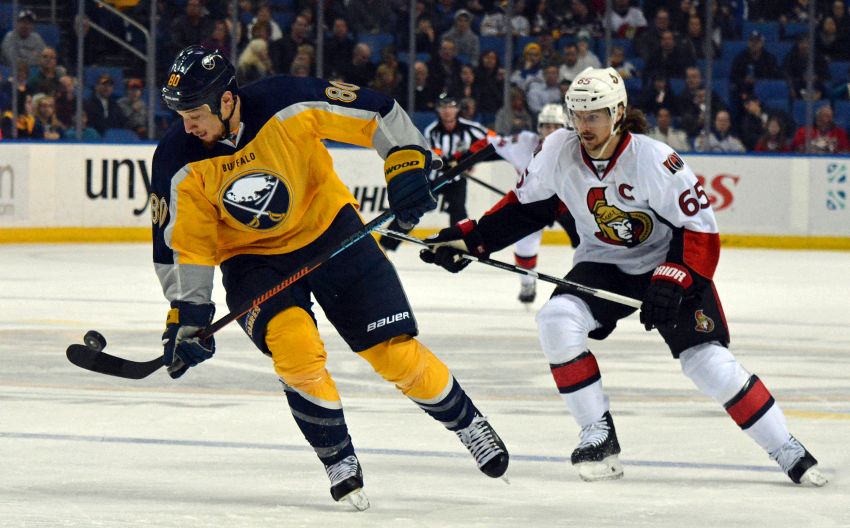 BUFFALO – The Sabres have played 165 periods this trying season. Most, given their 15-36-3 record and 30th overall standing, have been poor or even awful.

In the opening period of Tuesday’s 2-1 loss to the Ottawa Senators, the Sabres, fresh of a pathetic 10-shot outing, performed terribly again, getting outscored 1-0 and outshot 14-8.

Early on, some fans in the announced sellout crowd of 19,070 inside the First Niagara Center responded to each Sabres shot with a mild Bronx cheer.

“I just felt the first period, the first 10 minutes particularly, we weren’t in the play at all,” Sabres coach Ted Nolan said. “We weren’t skating. We weren’t working, winning the battles.”

Then, unlike so many times this season, the Sabres roared back, dominating the Senators throughout the second period. At one point, the Sabres had a 15-0 shot advantage.

Seriously, the Sabres, who have had 21 or fewer shots in a game 24 times this season, outshot the Senators 21-4 in the period.

“The way we played in the second with some energy, winning some battles and hitting and doing the right things, I thought that period was probably the best period we played all season,” Nolan said.

But the Sabres couldn’t get rewarded. The puck stopped dead on the goal line after Matt Moulson beat Senators goalie Robin Lehner.

Later in the period, the referee immediately waved off Mike Weber’s goal because Marcus Foligno interfered with Lehner. Replays showed he barely touched him, however.

Tyler Myers’ power-play goal, his third score in seven games, tied it 5:08 into third period. But Milan Michalek scored the winner at 12:15.

Still, despite losing for the 17th time in 19 games, the Sabres made some progress. If they keep playing like they did during the final 40 minutes, they’ll win more times than they lose.

“That second period was one of our better periods of the year,” Myers said. “Even though we weren’t rewarded with a goal in the period, I thought the way we controlled the puck, guys were playing with confidence with the puck, they were hanging onto it making plays. The biggest thing was we were getting it to the net.”

Overall, they outshot the Senators 36-26, just the fifth time they’ve outshot an opponent all season. The Sabres had been outshot 21 times in a row!

What happened early on?

“We were just lackadaisical, didn’t really look like we wanted to be out there,” Myers said. “I think the first intermission kind of woke us up.”

The no-goal call clearly irked the Sabres. Foligno thought he was just battling in front when Weber shot the puck near the left circle.

“I thought I was off to the side,” Foligno said. “I thought it was just a good shot that got in. I don’t think I interrupted much. If there was a bump, it wasn’t anything that stopped that shot from going in.”

“The way the year’s going, those are the type of calls you’re going to get,” he said.

“I thought the momentum was starting to switch,” he said. “It felt like this was the first time we outplayed a team and didn’t get win.”

Erik Karlsson’s power-play goal opened the scoring 12:18 into the game.