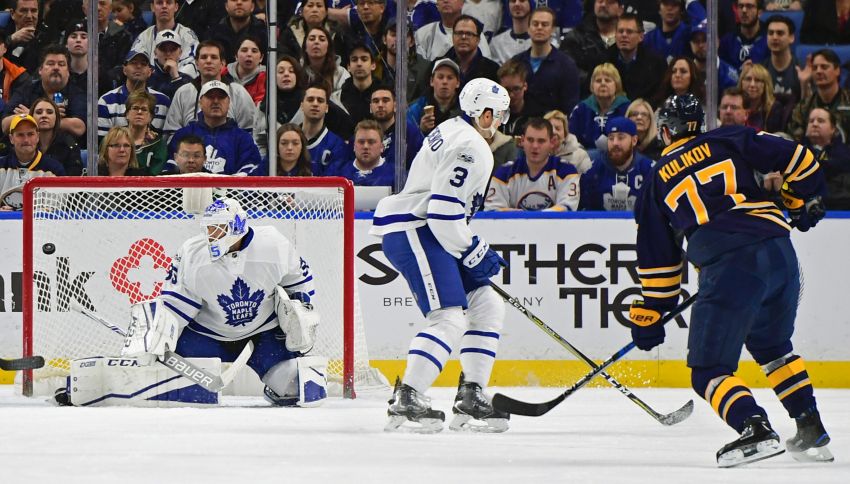 BUFFALO – To Sabres coach Dan Bylsma, the worst appears to be behind defenseman Dmitry Kulikov, who has struggled throughout an injury-plagued season.

Fresh off a nine-game absence, Kulikov enjoyed his finest outing all season in Saturday’s 5-2 win over Toronto, scoring a power-play goal and feeding Jack Eichel for another score on the man advantage.

But before Kulikov returned from an upper-body injury, Bylsma could tell the Russian, who has battled a lower-back bruise all season, had turned a corner.

Bylsma, whose Sabres host the Florida Panthers on Monday at KeyBank Center, said the 20 days Kulikov recently sat out was “maybe the most beneficial” stretch for him.

“His two practices last week were the best he’s looked, and in the game, he also had the opportunity to also be on the power play,” he said. “He looked real good running that power play with Jack up top, making the pass and scoring the goal.

“It’s another seven games here to continue that and show what he can do.”

He added: “It’s a huge opportunity for Dmitry.”

Kulikov, incredibly, has mustered two goals and four points in 40 games this season, his first with the Sabres. So Saturday, his 500th NHL appearance, he doubled his offensive output in just a few minutes.

“I was just trying to take advantage of the opportunity that I get in the last eight, seven games,” Kulikov said.

The season, of course, has been difficult for Kulikov, who spent seven seasons with the Panthers. The 26-year-old was injured in his preseason debut and couldn’t find any footing until recently.