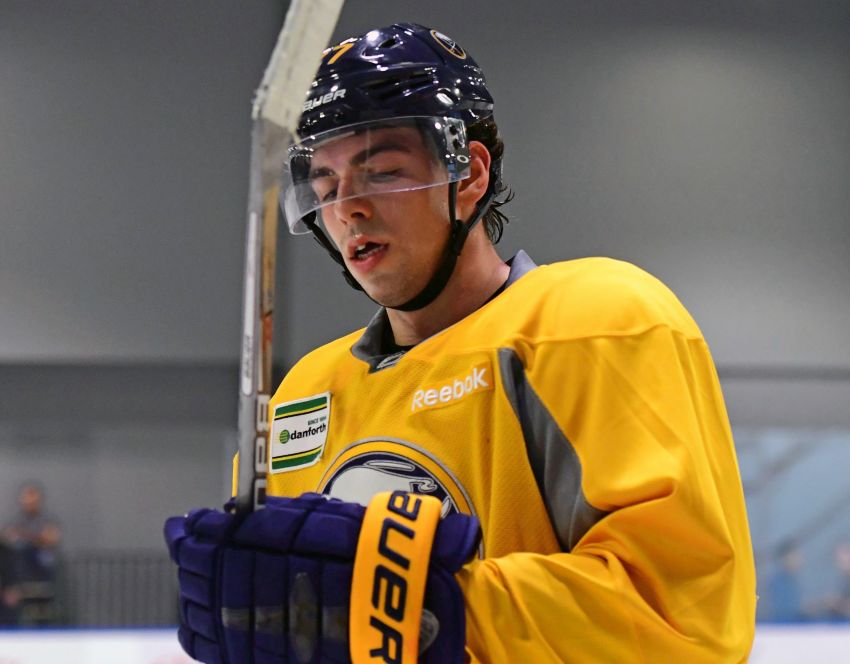 The Sabres got Derek Grant back on Monday. ©2017, Dan Hickling, Olean Times Herald

“It was pretty exciting in my hometown, so it was extra special,” Grant said this morning after the Sabres, who reclaimed him Monday, recalled him from the AHL.

Tonight against the Anaheim Ducks at KeyBank Center, Grant should play his 82nd NHL game, the equivalent of a full season. He has seven assists.

The Sabres recalled Grant and center Evan Rodrigues because winger Evander Kane is questionable for tonight’s game with a hand injury and center Zemgus Girgensons is out after enduring some big hits this past week.

Grant will likely be the Sabres’ fourth-line center, his position all season, again tonight. He skated between Nick Deslauriers and Matt Moulson this morning. Also expect Grant to kill penalties and take faceoffs.

The Sabres have recently been using Deslauriers sparingly as the No. 4 center and moving his wingers up to scoring lines for more ice time.

“Getting put on waivers sucks,” Grant said. “When you get claimed, it’s a good feeling in the sense that I know I’m an NHL player and obviously someone else felt that.”