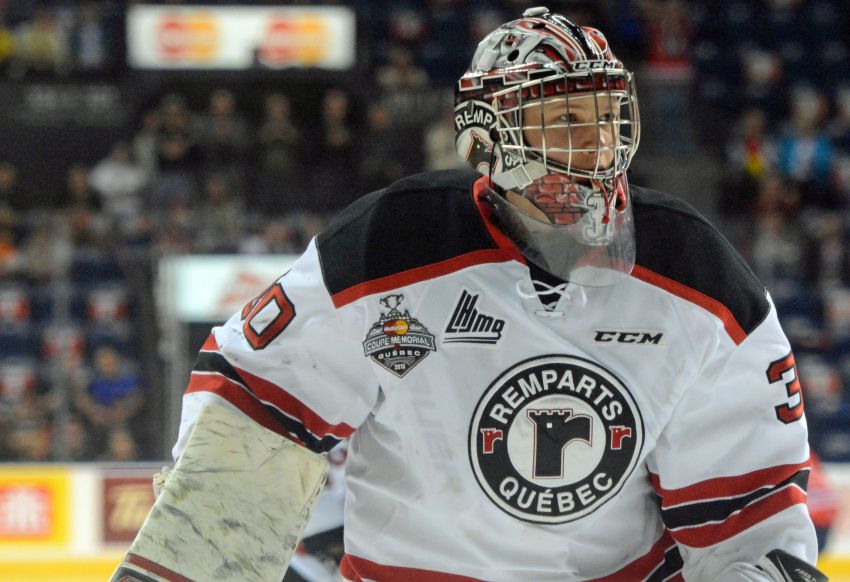 BUFFALO – Until he was 9 years old, NHL Draft prospect Callum Booth was just a regular skater on his youth team. He idolized Tampa Bay Lightning center Vincent Lecavlier and loved the No. 4 his hero wore.

Then one day, tired of getting lit up, his team’s goalie “just gave up,” Booth recalled earlier this month at the NHL Scouting Combine. The coaches scrambled to find a replacement right before the playoffs. Booth was one of three or four kids who tried out.

“I was the only one left standing,” Booth said inside HarborCenter. “So I’ve been a goalie ever since.”

The emergency goalie developed into a darn good one.

Booth is NHL Central Scouting’s No. 2 North American goalie prospect for this weekend’s draft. The 18-year-old, a starter with the QMJHL’s Quebec Remparts some of last season, could be a second- or third-round selection.

The 6-foot-2, 199-pound Booth is “a prototype of goalies you see in the NHL,” said his coach, Philippe Boucher, a former Sabres defenseman.

The Sabres, of course, have no clear-cut goalie of the future. They have eight picks, including the 21st, 31st, 51st and 92nd selections, so Booth could be available. Sabres general manager Tim Murray said last week he’s interested in taking a goalie at 21.

Booth spoke to the Sabres first inside a packed room at the combine the team hosted.

“It’s a little stressful at first seeing all those people,” Booth said.

That experience, however, probably wasn’t as stressful as Booth’s 2014-15 campaign. In his second junior campaign, Booth morphed from the Remparts’ No. 1 into a seldom-used backup.

As Memorial Cup host, the Remparts were guaranteed a spot in the four-team Canadian Hockey League tournament. Boucher couldn’t rely on a young goalie with a championship within grasp, so he acquired Zachary Fucale, one of the league’s best, before Christmas.

Losing his job, Booth said, tested him not only as a goalie, “but as a person.”

“To deal with that, it was heartbreaking at first,” said Booth, who had a 3.05 goals-against average and a .900 save percentage in 41 games. “I more than anybody want to play every single game all season.”

Boucher added: “He was good enough to be a No. 1 goalie in the league.”

The deal also worked out well for Boucher, who held onto Booth when other teams were trying to pry him away in a trade.

Here are two goalies the Sabres could pick.

Since 6-foot-4, 203-pound Samsonov didn’t attend the combine, some Sabres representatives recently went to Detroit and spoke to the No. 1 rated European netminder. The Russian might not last until the Sabres pick at 21, however.

“There’s so much buzz around this guy,” said Justin Goldman, a goalie analyst who runs thegoalieguild.com. “It’s basically like the next Andrei Vasilevskiy, (the last goalie taken in the first round in 2012). … His talent is so high end that even a doorknob could develop this guy into an NHL goalie.”

The 6-foot-4, 215-pound Blackwood, the No. 1 rated North American goalie, started changing his style when he reached junior hockey.

“I used to be more of a butterfly goalie, more blocking, but you can’t play like that anymore,” Blackwood said. “The time of the game’s changed. I have to be patient on my feet, a little more reactive. So I say I’m almost like a hybrid, not quite. I’m trying to be more that way, more reactive, more up on my feet.”

Goldman said Blackwood is “a legit first-rounder” who probably won’t last past the 40th pick.