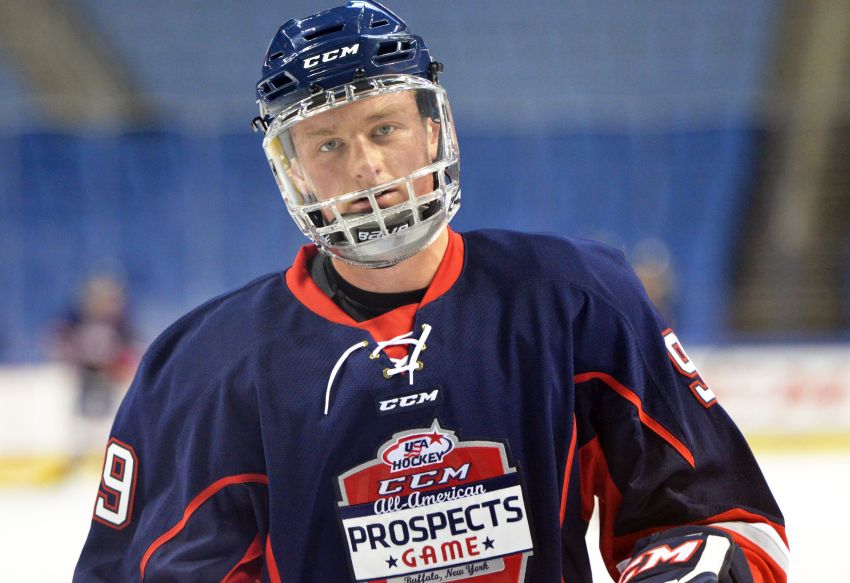 BUFFALO – Tim Murray has joked he’ll make the easiest decision of his career before he walks to the NHL Draft podium Friday night inside the BB&T Center and, in his typical straightforward delivery, utters six words into the microphone: “The Buffalo Sabres select Jack Eichel.”

But after securing a potentially franchise-changing talent, the general manager might have an arduous two days ahead of him in Sunrise, Fla.

Murray’s actions could shape the Sabres for the next decade or more.

Ideally, if one of the prospects the Sabres have ranked in their top 10 is available at 21, the rebuilding club will use the pick, which they acquired from the New York Islanders in the Thomas Vanek trade.

“That would be outstanding,” Murray said Thursday inside the First Niagara Center. “I don’t think that’s going to happen.”

So Murray has another plan, or, perhaps more appropriately, wish. He hopes a team experiencing salary cap problems can offer the Sabres a youngster – a top-six forward or a top-three defenseman – or a No. 1 goalie for the pick.

“Both scenarios are optimal for us,” Murray said.

But the chances of either scenario happening are “slim to none,” he said.

“The third thing is we’ll take the highest player on our list,” Murray said.

To Murray, if you try to address weaknesses at a draft, you’ll just open up another hole.

“If you think you have an abundance of forwards today, two drafts from now you’re going to say you don’t have enough wingers,” he said. “It’s the best player available. If you have a weakness or a lack of a certain position, go out and trade for that position. The draft guys could be a year away, could be three years away. You have to look big picture when it comes to the draft.”

He added: “We’re not picking 23-year-old right guards that can step in and play tomorrow. That’s not what we are as a league.”

Eichel, assuming he leaves Boston University, will almost certainly be the only player the Sabres draft who steps into the league immediately. The others who make it will most likely be two or three years away, if not longer.

Goalies, given the complexity of the position, usually take longer to develop than forwards or defensemen. Murray calls goalies “wild cards” and believes “you should throw a dart at a goalie every draft.”

The Sabres have no clear goalie of the future, so Murray’s interested in taking one at 21. He praised Russian Ilya Samsonov, the draft’s No. 1 rated European netminder by NHL Central Scouting. But Murray wants to read the draft. Like most GMs, he’s willing to move up for the right guy. Of course, someone the Sabres want with their second first-round pick could also be available at 31.

Since goalies usually get picked later – one hasn’t been selected in the first round since Tampa Bay took Andrei Vasilevskiy 19th in 2012 – the Sabres might be able to wait.

“So it’s reading the draft as the draft’s going on, it’s not reading the draft today,” Murray said. “We have a fair idea where a lot of the players are going to go today, but you have to sit at that table and kind of read the tea leaves and catch the direction of where it’s going.”