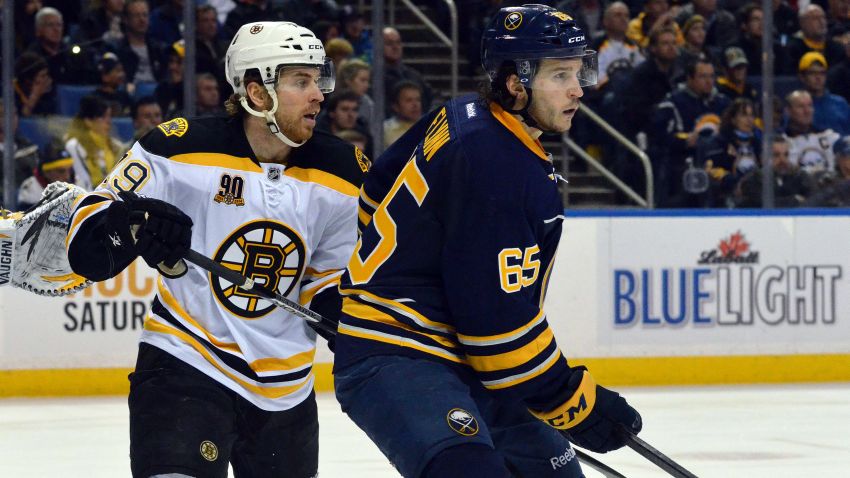 “I scored a lot. But then you realize it’s not all about scoring,” Flynn said Friday inside the First Niagara Center after the Sabres prepared for tonight’s game in Boston against the Bruins. “I weighed probably 160 pounds. Trying to go to college (at) 160 pounds, it’s not going to work. I had to play a year of junior hockey, started to learn more of the defensive game.”

Flynn kept scoring once he reached Maine in 2008, compiling 69 goals and 156 points in 153 collegiate games. But by then he had realized if he ever wanted to crack the NHL and stay, he had to be sound defensively.

“You got to be a guy they can trust to put out there every single night, because that’s what it’s all about in this league is being consistent,” Flynn said. “There’s a lot of skill players. There’s not much difference between skill level and top guys in the American League and kind of bottom six guys in the NHL.”

Right now, the 180-pound Flynn’s working his way up the Sabres’ depth chart as a checker. The 25-year-old has mostly skated as a fourth-liner recently, centering Kevin Porter and Matt Ellis, an intriguing combination interim coach Ted Nolan plays regularly.

But Flynn’s starting to display the offensive skills that made him a sought-after college free agent in 2012.

The Boston native enjoyed arguably his best NHL game Thursday, recording a goal and his first two-point performance in the Sabres’ 4-2 victory against the Bruins.

In the first period, Flynn scored a nifty short-handed breakaway goal, beating two defenders before backhanding the puck in the net.

In the third period, after earning a promotion between Marcus Foligno and Matt D’Agostini with Cody Hodgson out, Flynn made a terrific pass to Tyler Myers, stopping in the left circle before pausing and feeding the streaking defenseman perfectly for an insurance goal.

Nolan said the poise Flynn showcased dishing to Myers was a sign of his increasing comfort. A few weeks ago he would’ve simply shot the puck.

“It’s tough to score when you’re scared to make plays and you’re not playing with confidence,” Flynn said.

Transitioning to a new role hasn’t been easy for Flynn, who has points in consecutive games for the first time in his 59-game career.

“It’s really hard to score goals if you’re playing fourth-line center and playing almost half your ice time penalty killing,” he said. “It’s also tough when you’re used to scoring goals your whole life, and then you get here and your role changes. A little difficult. There’s definitely an adjustment period. You have to adapt to it.

“I feel pretty comfortable with the role I need to play, and as you build confidence, more offense will start to come.”

So far, Flynn has nine goals and 17 points in his NHL career.

Will he simply be a solid checker or eventually morph into a more consistent scorer?

“I don’t think you even want to just put a cap on what your potential’s going to be,” said Flynn, who’s been switching between center and wing. “I obviously have confidence in myself that I can score in this league. I just got to earn some more minutes and earn the chance to be in more offensive situations. For right now, I still got a lot to work on.”

“The biggest thing with any player is when you can start growing into your own skin, realize what you bring to the table and how to use those assets, your confidence grows,” Ellis said. “Flynny, first and foremost, is one of the fastest guys in this league, and when he skates and he’s on the puck, look out, because good things tend to happen.”

Nolan has lauded Flynn’s on-ice intelligence. Incredibly, he has one penalty in his NHL career, a hooking call in his 53rd game. Nolan also likes his quiet demeanor and hardworking style.

“This is a hardworking city,” Nolan said. “They want to see hardworking guys. Flynner’s one of those guys. He just goes about his business.”

At times, Nolan said, he doesn’t even realize Flynn’s on the ice.

“Sometimes you don’t even know he’s at practice unless you just watch him,” he said. “He’s so quiet. He was sure loud the way he played (Thursday).”